Environmental art in the city

Laura Coleman explains why she went ahead and set up an arts organisation to explore environmental art, despite the advice of many people. 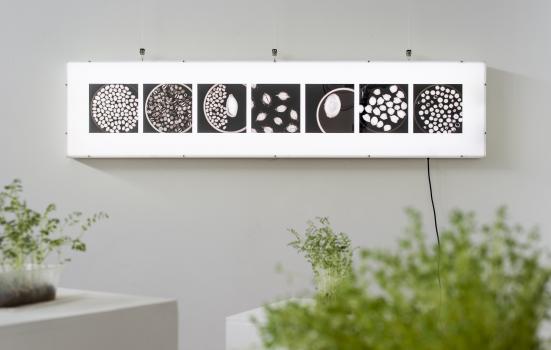 The Seed to Seed exhibition

Environmental art is a tricky phrase. When I decided to set up an environmental arts organisation in 2012, I was both surprised and unsurprised by how many people told me not to do it. Today, ONCA (One Network for Conservation and the Arts) is a charity, gallery and performance space in inner city Brighton that uses creativity to address issues of ecological change. I still find that when used together ‘environmental’ and ‘art’ are words met with mixed responses by those in the art world. For many, an environmental arts initiative is out of place in the city. It belongs in the domains of eco-enthusiasts, and deals in giant redwoods and the Loire Valley, in the majesty of an elephant or the curve of a bird’s wing. It is art that is pleasing, beautiful and awe-inspiring, and yet rarely does it earn a place in the ‘high art’ galleries, dealing as it does with nature – a ‘nature’ that, by its very nature, does not include us.

Concern however for the stability of that very nature is rising, and our link to it is becoming more and more clear. Despite our need to define ourselves as distinct from the living world, we are beginning to look for new ways to understand our place within it. In the 1960s, a movement of land artists emerged, bringing a form of environmental art that integrated rather than separated subject and viewer, artist and earth. Led in the UK by people such as Richard Long, Andy Goldsworthy and Chris Drury, they created works from nature, in nature. Land art is ephemeral and fleeting, and it draws comparisons between the erosion of life, earth and time. However, despite the acclaim and recognition received for its major proponents, land art still hints at a stigma that touches other ‘earth’ movements. But now – as ecological facts become increasingly alarming and we become less able to fathom what degree of change is coming – we are turning more and more to the cultural sphere. For me, and for many emerging artists, the question to address is: How can we re-orientate our cultural identity to see ourselves as part of, rather than separate from, our environment? And moreover, as the environment changes, how must we change?

ONCA’s most recent exhibition has been a moving image installation called Seed to Seed (pictured) by Italian artist and filmmaker Lorenza Ippolito. Ippolito is interested in the connections between identity, belonging and nostalgia, and while on a trip to meet the organisation Navdanya in Uttarkhand, India, she started researching the traditional art of seed keeping. Navdanya campaigns against multinational domination of food production and works to preserve this ancient approach to safeguarding biodiversity. Traditionally, local farmers save and exchange seeds across generations. However, due to increasing pressure to substitute local seeds with chemically infused, branded seeds from multinational producers, many farmers are unable to afford the pesticides and fertilisers new seeds are so dependent on. As a result, these seed keepers often fall into a spiral of debt and suicide, not able to revert to traditional methods due to impoverished soil.

“For me,” says Ippolito, “the story of the seed keepers was symbolic of the impact of globalisation, not only on biodiversity but on cultural diversity too. Every action has a reaction and I wanted to explore what happens when communities, such as the Indian diaspora, are displaced. How is a new sense of belonging created? How do they create new roots in new lands?” Back in the UK, Ippolito became fascinated with the spread of Indian communities throughout the world: “By using the seed as a metaphor, I have drawn out ideas about heritage and social ecologies of place, to create a piece that explores personal stories about making a home in a culture different from one’s own.”

Later this month a project sees artists and young people creating 100 small works about trees, inspiring in turn the planting of 100 new trees in central Brighton.

Environmental art in the city