Shouting in the street

A huge vocal work is premiered this weekend in Birmingham, followed by performances in Berlin and London. Stephen Newbould describes how it has come together. 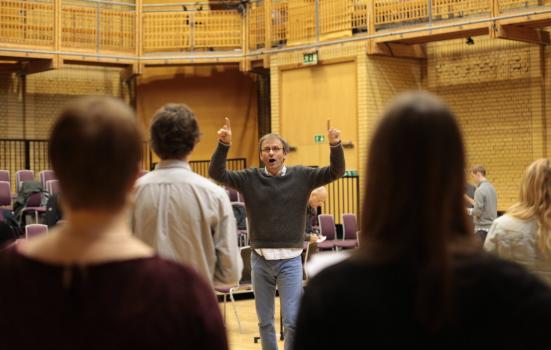 Crowd Out began its rollercoaster journey into existence in New York in March 2008. Birmingham Contemporary Music Group (BCMG) was in the city to give a series of performances at the Carnegie Hall and a rehearsal-free lunchbreak gave me the opportunity to renew contact with David Lang. We enjoyed working with him so I asked him what he would like to write for us next. After a pause he said: “I want to write a piece for a thousand voices shouting in the street.”

It was a project that Lang had carried about with him ever since he had been to an Arsenal football match and had been overwhelmed by being part of this gigantic crowd of supporters and by the chaotic cross-currents of singing, chanting and shouting. It felt as if David had thrown down a gauntlet – it was an irresistible challenge. I accepted it and it immediately felt like the best kind of commission that would take both the composer and BCMG into new territory.

All the performers are voluntary – recruited through advertising, press, community contacts and word of mouth

That was six years ago, and during that time we have had to find the right partners to make the project happen while both of us were striving to produce an artistic project of the highest quality. Part of the attraction of making Crowd Out happen has been the collaborative process. The first person I spoke to was Abigail Pogson, Executive Director of Spitalfields Music. Her answer was simple: “We must do it.” And her commitment has been absolutely central throughout.

The next important stage was getting Simon Halsey on board as Music Director. As a leading choral director and through his recent appointment at LSO and LSO Sing he has been able to swell the Spitalfields Crowd Out community. Each of the three partners – BCMG, the education department of the Berlin Philharmonic and Spitalfields Music – will build its own body of a thousand performers. And there is a potential for a Crowd Out community in New York in the future as well.

Birmingham seemed to be a particularly appropriate place to incubate the project because there is a collaborative arts community here and a strong ‘culture of the event’ that attracts big crowds. We have had a positive partner in Millennium Point, Birmingham’s centre for science, technology and design, where the performances will take place, and through our learning and participation team we have drawn in choirs, singing groups and individuals from all over the city. It is a similar story in Berlin and London where recruitment has been through a large and diverse range of voluntary organisations. All the performers are voluntary – recruited through advertising, press, community contacts and word of mouth. We have developed an elaborate pyramid structure with a ‘super’ conductor (Simon Halsey) at its apex and 20 sub-conductors, each in charge of a group of 50 performers – a structure which has been roughly mirrored in Berlin and London.

We had an initial ‘discovery weekend’ in Birmingham in November 2013 for the core teams from Birmingham, Berlin and London, working with a group of about 100 recruits, led by David Lang and Simon Halsey. It was the first opportunity for David to hear what it might actually sound like and, crucially, whether it was going to work. We also used the weekend to establish a common chain of command, rehearsal structure and information exchange, for although each of the three projects is autonomous, it is important to keep in touch with one another and to feel that we are building an international community.

Here in Birmingham, smaller group rehearsals began in earnest at the beginning of May, with each group of 50 and their conductor making their own performance schedule. We began putting the piece together in earnest ten days before the premiere (this Sunday 8 June), with larger rehearsals each involving groups of 250, and overseen by Simon Halsey. For obvious logistical reasons, the thousand performers will only come together for full rehearsals in the glass atrium of Millennium Point on the day before the world premiere.

The score is only twelve pages long on paper, but that belies the complexity of the piece, which includes singing, speaking, chanting, shouting and clapping. There is a strong element of chaos in the piece, as David wanted to give the impression of a huge crowd trying to come together but never quite succeeding. It is about 40 minutes long and every performance will be subtly different. It will be fascinating to hear how the Berlin and London versions differ from ours here in Birmingham. They will all certainly look different as each production has its own theatre director. At BCMG we have worked with James Yarker of Stan’s Cafe Theatre Company.

This is a risky venture. It is consciously about being out of our comfort zone, but it has been an exhilarating experience and I fully intend to be up there shouting and chanting with the best of them.

Shouting in the street