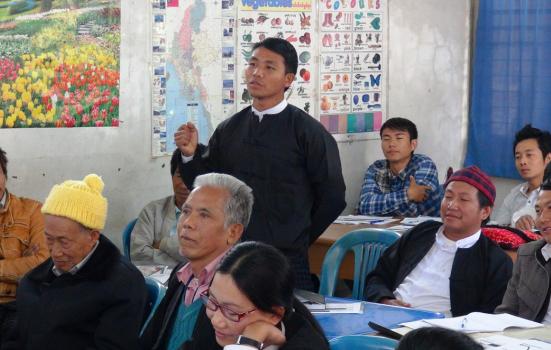 Writers at one of the workshops

Of late, Burmese literature has experienced liberalising reforms which have allowed the Burmese literary community to write, to some extent, without fear of censorship or imprisonment. And while this cautious optimism is to be congratulated, what has often been overlooked is the divergent state of Burmese literature: 135 ethnic minority groups each with an unread legacy of literature rooted in their own language, customs and environment.

It is this cultural inheritance that the British Council is reaching out to with a three-year project called ‘Hidden Words, Hidden Worlds’. We are doing this through short story development workshops in the seven main ethnic regions of Burma, conducted in the regional language for local community members. It will culminate in a published anthology.

Operating in Burma since 1947, the British Council has fostered a network of regional partners, without which the implementation of these workshops would be impossible. Undoubtedly our biggest partners are the Millennium Centres: 19 self-access centres, co-funded by the British Council and British Embassy, which work with the local community in areas ranging from English language instruction to capacity-building. Establishing mutual relationships with the managers of these centres is the first priority, as they are the individuals who promote the workshops in the ethnic regions, contact the local secular and religious literature committees, translate documents, accept participant application forms, and physically host the workshops.

The project itself kicked off with a four-day workshop in the capital Yangon, led by James Byrne, the poet and editor of Bones will Crow, the first translated anthology of Burmese poetry published in the west. James led 16 published Burmese writers in short story construction and methodologies. Five of those participating writers were then chosen to lead their own workshops in the ethnic regions. One concern which arose from this initial workshop, an issue which any international organisation working in the industry in Burma should be aware of, was a claim of cultural colonialism: Why were we instructing Burmese writers on western literary styles at the expense of indigenous forms of short story construction? However, this fear was allayed as Burmese short stories have their roots in their western counterparts, arising in the early twentieth century with Burmese writers mirroring western writers and evolving their narrative styles from them.

It was important to stress the unique cultural contribution each individual ethnic group possesses, so securing contact with the regional culture and literature associations became our second priority. These associations preserve and promote indigenous cultural and literary practices. Technically illegal, the government has turned a blind eye to their activities seeing their chronic underfunding and inaccessibility due to ongoing conflict as not a serious threat to the stability of the nation. Yet, by working with these groups to co-lead the workshops, elements of each group’s ethnic signature was evaluated and worked into the short stories generated by the workshops.

Setting priorities is a basic formula for any project, but often the realities of working in a country like Burma can stretch the success of those priorities to their limits. A World Bank report, published in late 2013, described Burma as being one of the top five most difficult places in which to do business today − an environment that affects cultural practitioners too. The biggest challenge the project has faced is the dismally low telecommunications infrastructure: telephone landlines only cover 8% of the Burmese population; less than 2% of the country has access to the internet, with an even smaller percentage owning an email address; mobile phone ownership is increasing, yet in 2013 Burma had the lowest number of SIM cards per 100 people in the world, behind North Korea and Somalia.

Naturally, this puts a strain on any dialogue between the project co-ordinator based in Yangon and the regional partners. Deadlines are merely optimum dates with components, such as promotional designs, translation of workshop schedules and syllabuses, collecting application forms and setting venue dates, often taking weeks longer than estimated.

The very nature of the project − the development of ethnic minority language literature − poses difficulties in focusing on which ethnic language to conduct the workshops in and finding native speakers of those languages at a level advanced enough to write in a literary style. In Karen State, with three major ethnic groups represented, the workshop was eventually conducted in five languages: English, Burmese, Sgaw, East and West Plong. In Mon state, one participant travelled from a village over 40 miles away and slept at the workshop venue as he was unable to go home before night fell. (Bandits, intransigent government checkpoints and ethnic, armed group patrols are a nightly reality in some ethnic regions.)

Our aim is to complete the workshops by this July, with three out of the eight remaining, including Chin State, the most ethnically diverse and also the poorest state in Burma. The Burmese publication date is slated for the end of this year in time for distribution to the annual ethnic group summer camps as part of the ongoing educational reforms in April 2015. If funding and linguistic capabilities allow, translation into English will begin in 2015.

My advice to other individuals and organisations contemplating cultural projects in Burma is this:

Lucas Stewart is a Literature Advisor at the British Council Burma.
www.britishcouncil.org