Cila Warncke discusses the role of literature in promoting democracy and social change in a country like Myanmar. 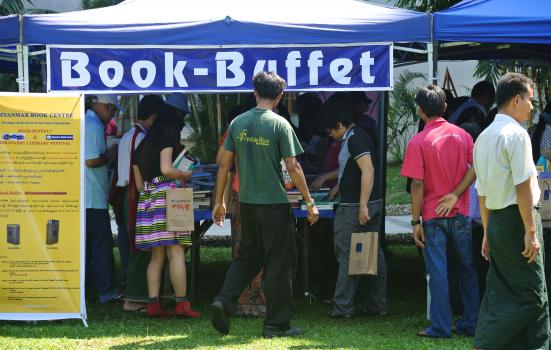 Freedom to read and write is something most of us take for granted. The Irrawaddy Literary Festival in Yangon, Myanmar (formerly Burma), which took place just one week after the government officially disbanded its censorship apparatus, was an opportunity to consider the role of the arts in promoting democracy and social change. The theme that emerged was the limits of literature. Books can inspire and teach individuals, and provide a basis for mutual understanding, but what they cannot do is overcome physical oppression, or dissolve the economic and educational barriers that prevent so many people from partaking in art and literature.

Until the military junta stepped aside in 2010 to allow a democratically elected government to take power, Myanmar was not a good place to be a writer – even if you were just passing through. Caroline Courtauld, author of numerous books on Asia including the history-come-travel-guide ‘Myanmar: Burma in Style’, recalls receiving a polite letter which suggested she did not apply for a visa for a while. It was over a decade before she was able to go to Myanmar again. Other Western authors at the festival had similar stories. Historian Timothy Garton-Ash was blacklisted by the military government in the 1990s and broadcaster Fergal Keane recalls that on his last visit to Yangon he had to pose as a water filter salesman.

Schools were designed to teach kids to answer questions, not ask them

These anecdotes raise chuckles in the air-conditioned comfort of the hotel ballroom. Outside an emerald lawn runs down to the silvery edge of Inya Lake and schoolchildren play under the palm trees. It is difficult to imagine this as a place of fear, but the festival’s Myanmar writers bear witness to a different reality: censorship, jail, coercion and isolation. Nobel peace prize winner, democratic leader and festival patron Aung San Suu Kyi speaks movingly of how books were her link to the world while she was under house arrest. “Make books a companion and you will never be lonely,” she advises the standing-room-only crowd.

Suu Kyi also jokes about her love of mysteries: “The more detective stories you read the better you get at working out who the villain will be. This is very useful in politics. You learn to ask yourself who is going to profit from this situation?” Her quip is a reminder that, although reading helped her become a better judge of human nature and therefore a savvier politician, it was only the change in government that gave her the freedom to exercise those skills.

Jung Chang, who gave a lively talk about the origins of her bestselling memoir ‘Wild Swans’, testifies to the critical importance of political freedom. The daughter of two communist party officials, Chang was forced into exile as a teenager and denied education after her parents fell foul of Mao’s cultural revolution. Her transformation from a farm labourer to a world-renowned author and intellectual was only possible because Mao’s revolutionary fervour finally cooled and he reopened the Chinese universities. Chang was able to study English first in China, then in the UK, where she earned a doctorate, met her husband and made a new life. Intellectual freedom, like it or not, is at the mercy of power.

This is not to say that art has no political function, but it is important to be realistic about the role of literature in promoting social change and focus our efforts accordingly. What books can do well is educate and connect people. Myanmar people take pride in their country’s high literacy rate, a legacy of the monastic school system that ensured even poor children had a basic education. During Myanmar’s 50 years of isolation, books were one of the few ways its citizens could experience the outside world.

Pascal Khoo Thwe is another Myanmar writer whose books helped on the road to freedom. While studying English in Mandalay he met Cambridge professor Dr John Casey. They corresponded for years, during which Khoo Thwe went from student activist to anti-government guerrilla fighter. Eventually Casey helped his long-distance protégé escape to Britain and study at the University of Cambridge. Khoo Thwe’s vivid memoir ‘From the Land of Green Ghosts’ is remarkable, but it ends before the most extraordinary part. “It is overwhelming to be back,” he says simply of his return from what he thought was permanent exile.

Khoo Thwe’s experience illustrates how literature facilitates communication and understanding between people who have little else in common. He and Dr Casey bonded over a mutual appreciation of James Joyce. Being able to use this currency relies on a certain type of education. Literacy is the essential first step but it takes a rigorous, canonical education to develop broad knowledge, critical skills and confidence. Myanmar’s military junta often attacked Suu Kyi for marrying a foreigner and living abroad. It was afraid of the power she had thanks to education and access to intellectual Western society. The junta also followed Mao’s example and shut down universities or forced students to study from home or in rural areas. This was in part to prevent protests, but it also showed a real fear of allowing people to become troublesomely well-educated. As one journalist who works in Yangon observes, schools were designed to teach kids to answer questions, not ask them.

This is not a Myanmar-specific issue. The bottom line dictates an individual’s quality and quantity of education in UK as well. Parents urge children to do ‘practical’ degrees and politicians push science, technology, engineering and mathematics programmes. Business and science courses are praised as pragmatic, while pursuing the arts is viewed as suspect, if not downright self-defeating. In Myanmar, economics has a much blunter effect on education, with children often taken out of school after the primary years and sent to work.

The unpleasant fact is that freedom is fundamentally a matter of politics and economics. That does not mean, however, that money and power are of paramount importance. To the contrary, art is the best hope for changing a world that still uses these crude instruments to arrange its affairs. Most of history is a record of violence and conquest which are nothing more than collective failures of empathy and imagination. Art and literature matter because you cannot read, much less write, without temporarily stepping outside yourself. Making and appreciating art teaches us to engage with the unfamiliar, and we learn empathy by imagining the lives of others. These are the tools that will help surmount the deadly doctrines of money and power.

Cila Warncke is a writer and explorer.
cilawarncke.com