An initiative for young people in Southwark helped them run a community festival and gain training at a professional level, writes Jane Packham. 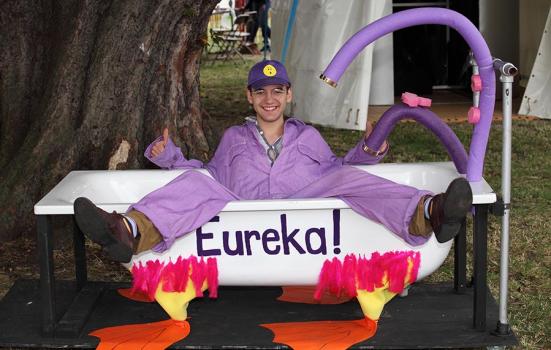 “I learnt more than I can say on paper...” was the answer 19-year-old Adam Ouissalett gave when asked what he had learnt from Southwark Young Producers (SYP) festival training. Adam is now managing his own samba band, South London Samba, performing across London and tutoring in schools. Adam is one of eight young residents from Southwark in south London who took part in SYP. His list of skills learnt includes time management, creating site plans and risk assessments, marketing and even weather plans.

SYP was created in response to rising youth unemployment in the borough, reinforced by the knowledge that there are limited routes into the creative and cultural sectors. Commissioned by Southwark Council and produced by Emergency Exit Arts, it aimed to provide 16 to 25 year olds with festival production training at a professional level, equipping them with tangible skills to support their future training and employment. And at the same time deliver a free community event as part of the annual Elephant and Nun Festival.

Youth unemployment is high, money is tight but for many they see a light through education and training

Paul Cowell, Southwark’s Events and Film Manager, said: “There’s an unfair stigma that young people in Southwark live with. Youth unemployment is high, money is tight but for many they see a light through education and training. I know that young people in Southwark bring talent, energy and vibrancy to our communities and as someone who has worked on community events for over fifteen years I encourage, nurture and showcase that.”

Working with a team of event professionals, SYP put the young people in the driving seat. They made the decisions about every aspect of the event, with the professionals on hand to guide, discuss and debate the ‘hows, whys, whats and whens’. As Young Producer Sarah Aderele points out: “This wasn’t our mentors saying ‘pretend you did this’ - we did this ourselves!”

SYP began with an introduction to the creative sector, unpicking what an event is and taking the group to visit different events. For twelve weeks the young producers worked on plans for their own festival, named Combonation. It aims to celebrate diverse cultures, showcase local talent and highlight youth culture.

From the outset the group understood the importance of marketing the event, understanding the power of Twitter to reach younger audiences. They managed two accounts, one for their project, @SouthwarkYPs, and one for the event, @CombonationFest.

Chloe Osborne, EEA’s Creative Director for the project, was keen to demonstrate that young people could create imaginative solutions: “EEA’s role was to encourage the young producers to think outside the box so that this wasn’t a predictable event.” The end-result was a one-day family-friendly festival packed with a mix of live performances from spoken word poetry, hip hop and Beatboxing to Bollywood dance and Salsa. Visitors even learnt dance and created art installations. EEA worked with the young producers to design bespoke settings including giant golden swans, an outdoor lounge and a London taxi as a stage.

Visitors were taken on a journey through ‘Genius Alley’, specially created by young theatre artists which led to the Mind your Own Business zone, showcasing Southwark Council’s young entrepreneurs.

The young producers managed the day; they were the first on and last off site, learning in a real-time environment what is needed to produce a festival. As Young Producer Chloë Downes describes: “The programme was much more than I expected. Rather than being hand-held, we were supported by EEA to think and make decisions like events producers.”

EEA brought independent producer Ruby Baker on board to guide the coordination of the festival, sourcing inspirational event professionals to give advice on site planning, marketing, funding and event safety. Ruby says: “I’m enormously proud of what the team achieved. The improvement in confidence as individuals is astounding. Even if they don't want to work in events in the future the sense of achievement they have experienced will allow them to aim higher in their careers.”

The SYP programme ultimately allowed a group of young people with little experience of the arts to challenge themselves and to learn new skills. It gave the local authority a chance to invest directly in their future, tackling youth unemployment (at a local level) while delivering an event that can honestly say it had its community at its heart.

Watch a film of the Combonation festival.