Mark Hewitt reflects on the impact of an arts regeneration project in Leysdown-on-Sea on the Isle of Sheppey. 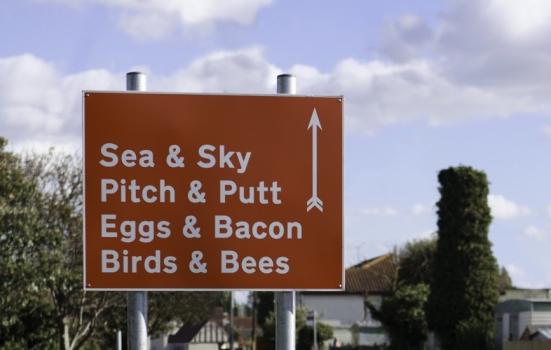 Leysdown-on-Sea is a coastal, semi-rural village that sits on the eastern tip of the Isle of Sheppey in Kent. It has an estimated population of 1,500 that triples during the summer months. ‘Leysdown Rose-tinted’ was a project that aimed, through an ongoing process of community engagement and a series of artist commissions, to revitalise this neglected seaside village which faces a number of social and economic challenges. According to the 2010 Index of Multiple Deprivation, it is part of a borough that has the second highest level of deprivation of all the twelve districts in Kent, and Leysdown itself is one of the neighbourhoods indexed amongst the 20% most deprived nationally. The Isle of Sheppey generally is in economic decline owing to limited investment and a changing tourist industry. This has brought a range of social issues including low educational attainment and disaffection among young people.

Arts practice FrancisKnight was tasked by Swale Borough Council with devising and implementing a three-year programme of community-focused artist commissions that would help turn around the fortunes of the village and encourage local people to take a renewed pride in it. Creative directors Louise Francis and Laura Knight soon recognised both the potential and the difficulties of the brief: “The village had been promised a lot in the past and this hadn’t materialised. We walked into a situation where local people looked at us and thought ‘Here we go again!’ So we had to prove ourselves. We were focused and very aware that we had to be visible in the village, so people could get to know us. We based ourselves in the village hall, attended monthly parish council meetings and tried to become part of the village life.”

We needed artwork that people in the village would ‘get’, work that was simple but had quality

Over the three-year period they commissioned twelve pieces of permanent work from twelve artists, ranging from a new website to signage and seating, a rose garden and the new seaside lighting scheme. Over 1,000 people were engaged in these activities and the village’s online presence was significantly increased.

Major partners were brought on board including the Royal Society for the Protection of Birds and Arts Council England. Crucially, the programme also attracted significant pots of local funding from organisations such as the Queenborough Fisheries Trust and Swale Council for Voluntary Service. Louise and Laura continue: “We wanted to show the parish council that by putting in small pots of money towards projects, they could leverage more funds so that projects could become more successful and deliver more dynamic outcomes. We spent a lot of time on the advocacy side of things.”

It is fair to say that in a depressed area there is always likely to be negativity and a resistance to new ideas, perhaps even to the whole concept of artist-led urban renewal. This was something Louise and Laura had to respond to and challenge if the project was to be a success. Laura says: “We needed artwork that people in the village would ‘get’, work that was simple but had quality, like the signage and the seating, practical work that would make a difference to the village, to the environment and the area. Many of the ideas that came forward as proposals were lovely and aspirational, but we needed robust artwork: something that was going to be appreciated.”

For the individual artists working on the commissions, the village presented an obvious dissonance between the lovely things about the location and its rougher edges and elements of dysfunction. There are unspoilt beaches and areas of natural beauty in close proximity, and the village itself retains a lingering charm as an old-fashioned working-class seaside resort, traditionally a place of escape for work-weary Eastenders.

Laura says: “We started quite small with the Rose Garden and built from that. The artists we selected didn't necessarily have to know Leysdown, but someone like Alun Heslop is very keen on cycling, and this passion and his artwork seemed an obvious link to the cycle route commission.”

‘Can-do signage’ was a project that aimed to replace, at least in part, the proliferation of misleading and prohibitive signage that was everywhere on the streets of the village. With my own text the signs mixed the practical (directional information) with the whimsical, and much of the content was informed by conversations with local people.

For the Rob Olins’ seafront lighting installation, the design was informed in part by holding workshops with children at St Clement Primary School in Leysdown. Rob says: “I worked with Year 5s, and because the project ran through two academic years I carried on with the same crowd during their Year 6. They made scale models of the seafront area and, as well as the lighting, suggested all sorts of extra things. They put in a paddling pool and water jets and a little café. So they kind of expanded the idea, as if to say, if we're going to do the lights, we should do more.”

Michelle Crowe, headteacher at the school, recognised the social value of this interaction between schoolchildren and artist: “Giving the children the opportunity to help design a project for their own locality has helped them to feel part of the community. The work that Rob did with the children was particularly good as it focused on design and technology, art and science. It gave the children a real purpose to their learning.” Rob also canvassed the views of local people: “We did a lot of groundwork. During Leysdown Carnival we put up a stall and just asked people what sort of seaside lighting they might want. Strangely enough, a lot of people went for contemporary things.”

And how do Laura and Louise at FrancisKnight sum up the achievements of the project? Like this: “There was some beautiful artwork made for a beautiful area of Kent. The village sign hasn’t been vandalised. The garden is still there. The lights are up and working.”