Should I stay or should I go?

Following the Brexit vote, are young European actors who have chosen to work in the UK likely to stay? Mark C. Hewitt sounded out a few of them. 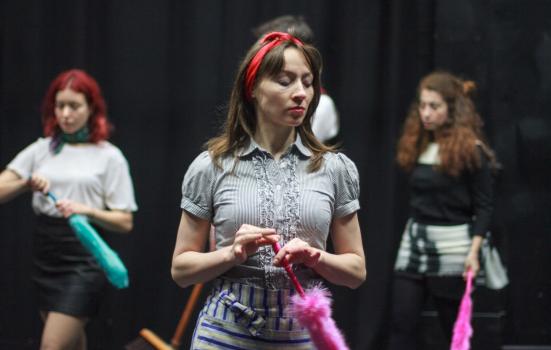 Oxana Nico from Romania during an R&D week in London in November 2014
Photo:

In 2013 I set up an artistic collaboration with Norwegian sampling percussionist, Thomas Strønen, who I invited to compose the music for my play Civilization (and its discontents). It was always intended to be an international work, and so when it came to R&D for the piece, I wanted the chorus in particular to have a multitude of foreign accents, much as you might find in any big city.

Accordingly, young performers from Romania, Italy, Turkey, Portugal, Greece and Switzerland got involved at different times. I’ve always delighted in hearing different versions of the way English is spoken, but it became clear last year that this delight is not shared by everyone.

After the EU referendum in June I wanted to know how the performers I’ve been working with felt about it and whether it had changed their attitude to working in this country. Here are the views of three of them.

From Greece to London

Dimitra Barla, from Greece, came to London to do a masters degree at East 15 Acting School. She says: “Once I’d finished the degree I didn’t want to go home but had to, for other reasons. It was very tough to work in Greece because of the social and financial circumstances, so I started developing my own work from scratch. When I moved back to London I continued with that.

“London is a tough city. It’s expensive, you have to find friends and a place to live… but I started doing little film projects and I thought maybe I can start developing my screen acting, which I hadn’t done back home. Here, there are student films, short films, just an abundance of screen acting experience one can acquire.”

I asked Dimitra if London was still the right place for her. “I definitely feel that. It’s so multicultural, there are so many venues and fringe festivals, there are pubs, there are writing evenings. The tricky part for me is that I have to juggle this with paying the rent and having a day job… but that’s the challenge for everyone.”

From Portugal to London

Marta Carvalho, from Portugal, also loves the multiculturalism of Britain. She spent ten years in her homeland working professionally in theatre and teaching movement and voice to young actors.

“I decided I should live abroad to challenge myself, experience different cultures, different ways of being an actor… I didn’t think of London as a first choice. I had thought about a Scandinavian country or Berlin. But in London everything was very easy. If you want to work you can work – there is opportunity and availability of jobs for everyone.

“It’s quite challenging because in Portugal I was working mainly as an artist and that paid for my house, my food… I was working on my craft and doing cultural projects. Here I have to struggle, I have to work in so many things, but I wanted to challenge myself so I guess I got what I wanted.

“I came here without knowing anyone, without knowing the industry, without having any connections and I’m starting to build that network – but I’ve realised a lot of other actors are doing the same, struggling like I’m struggling. So it is a place of opportunities but it’s also a tough city.“

And what about the referendum result? Dimitra replies: “I still remember waking up that day in June. I saw the result and I just couldn’t believe it. At the time I was living with two young British women. They were devastated. They were crying the whole day.

“I tend not to take a referendum result for granted… that’s how politics is where I come from. We had a referendum in Greece and it didn’t mean anything. And that made me feel better.

“The Brits, they have it worse than we do. We are the ones moving around and we can still move around. We’ve survived in London, we can survive anywhere!

“I didn’t internalise it. I didn’t take it as a personal rejection or think the people with whom I work or live don’t want me to be here. We live in London, it’s so multicultural… so I don’t feel that I’m in a hostile environment.”

Marta is also ambivalent. “We don’t know what’s going to happen. I’m here alone, so if I stay, if I go back or if I go to another country, that’s always open. It doesn’t really affect me.” But she conceded that if she had a family, things might be different.

“Maybe something good will come out of all this discussion. I do believe they are going to make it easier for people who are already here.”

Someone who does have family to worry about is Oxana Nico from Romania. Her son was born in 2014. She was in Moldova when she first heard the news. “My mum was saying they’ve voted Brexit. I thought it couldn’t be possible. And we put on the TV. London has been my home for ten years. You start asking yourself if this really is the country that you know and that you grew to love.

“We’ve got British citizenship now. So from the legal point of view there’s no problem. But then you hear about people expressing their hate towards immigrants and all this xenophobia.

“My son was born in this country and I was imagining him going to school here and having fluent proper English with no accent. I’ve always felt that this is the most tolerant and the best European country to be in as a foreigner.

“I need to make sure, if we decide to stay here, that I can offer my son a positive experience, knowing that he’s European but he’s also part of this society, that he belongs here and he can feel at home here.”