Art in the desert

Lisa Ball-Lechgar describes how Abu Dhabi has placed culture as a vital element in its ongoing development and growth. 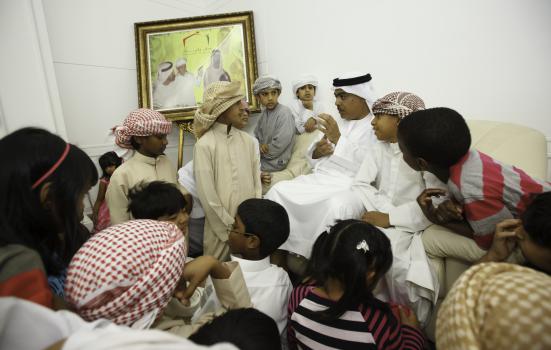 A storyteller with the children of an orphanage

The Emirate of Abu Dhabi’s government vision, embodied in the paper ‘Vision 2030’, recognises culture as a vital element of the Emirate’s ongoing development and growth, both socially and economically. 17 years since its establishment, Abu Dhabi Music & Arts Foundation (ADMAF) delivers arts education, community arts and large-scale productions spanning a multitude of artforms to more than 40,000 children, young people and adults each year. In doing so, it seeks to broaden horizons, foster innovation and nurture creative talent, often in partnership with leading national and international institutions, and all the while upholding the culture and heritage of society and its people.

At the heart of the organisation lies a belief that culture is the food that nurtures the soul of mankind and is the language that transcends borders. Many of our activities are around the building of bridges, forming intangible connections through unforgettable experiences that inspire, inform, embed and engage. Divided into three key areas, our vision is to do just that.

The ADMAF Education team fosters an understanding of the arts through nurseries, schools and universities. Through six focused programmes it develops arts-based projects that develop talent, reward excellence, enhance education, develop leadership and skills, and address the needs of those with profound and multiple learning disabilities. However, reaching the young and delivering initiatives that achieve the impact necessary to make a difference to students as well as teachers cannot be realised alone. Our network of partners began 17 years ago and today; the education team enjoys strategic partnerships with three federal universities and their multiple campuses, as well as New York University Abu Dhabi and the Zayed Higher Organisation for Humanitarian Affairs and Special Needs and its 12 centres.

One example of its work are the Islamic Arts Appreciation initiatives under the ‘Treasuring Traditions’ programme. From miniatures to mosaics, Islamic arts practice is in danger of disappearing. Under the patronage of HRH The Prince of Wales, London’s Prince’s School of Traditional Arts is playing a part in its revival through intensive workshops. To date, hundreds of primary and secondary pupils, as well as university students in Abu Dhabi, have been inspired to uphold customs and safeguard traditions.

Another area is community, which offers access to the arts for all throughout the seven emirates, regardless of age, ability or location. It honours the spirit of ‘Bilad Al Khayr’ (The Land of Blessings), inspired by the founder of the UAE. Since 2009 ADMAF Community has been creating cross-cultural platforms to support crafts, dance, music and storytelling initiatives, among others. Through partnerships with civil society organisations − from micro-financing traditional craft projects to shelters for women and children and environmental societies – we have been demonstrating how the arts can be an effective tool to address major social issues.

One recent example of community work has been with Ewa’a Shelters for Women & Children, which has provided refuge to over 160 women and children since its launch four years ago. Over the course of six months last year, a pilot initiative began which resulted in 34 residents creating 80 artworks with the guidance of a professional artist. The resulting public exhibition ‘Silent Voices’ offered a rare glimpse into the transformative nature of the visual arts in the rehabilitation process and raised levels of public awareness nationally around human trafficking and domestic abuse. The proceeds from the sale of artworks went back to Ewa’a to give survivors the support they desperately need to reintegrate into society and find a brighter, safer and dignified future.

ADMAF constantly seeks to set the standard for best practice in development, delivery, evaluation and continuity. In parallel with leading by example, it encourages independent initiatives through its grants scheme, which provides financial assistance and skills support for projects by individuals and organisations who seek to further cultural expression and add value to society. One area where the grants have made a significant contribution is independent filmmaking; in the past six years we have supported seven film projects, including ‘Amal’, a feature film by the director and poet Nujoom Alghanem.

Fostering excellence in the arts among the Emirati population of the UAE is of paramount importance. According to the UAE Bureau of National Statistics (2010 census), the Emirati population represents 11.5% of the total population (the rest being expatriates). ADMAF focuses on creating opportunities for Emiratis – students, graduates, arts professionals and public. The ‘Nationals’ Gallery’ initiative supports the growth, development and awareness of the visual arts, a prominent artform in the country. Through consultations, information, advocacy, exhibitions, workshops and roundtables, the gallery provides support to established as well as emerging visual artists in their practice and careers. As it does so, the initiative is collating profiles of every artist and building an online library for curators and arts professionals across the world to visit to learn more about the Emirati visual arts movement.

Our vision culminates each year in the Abu Dhabi Festival. Over the past ten years, musicians, actors, artists and dancers from over 40 different countries have performed. As in previous years over 90% of the 2013 festival is free, while the remaining ticketed 10% takes place in the main venue, Emirates Palace. Over the years, the festival has pioneered the presentation of internationally acclaimed artists in the Gulf and wider Arab world.

As ADMAF looks to the future, it plans to deepen the impact of its reach to the UAE’s children and adults. By working with local as well as international entities, it hopes to build upon the foundations it has laid and the appetite for the arts it has created, by continuing the transfer of advanced arts knowledge, expertise and skill into the fabric of society. By learning and adapting from countries overseas with older and embedded cultural industries, the cultural sector of the UAE may take ownership of them and flourish, while using a broad portfolio of techniques and approaches to preserve and evolve traditions and customs.

Art in the desert