Paul Cann believes that the longstanding exclusion of older people from the arts will be changing thanks to a new online initiative which promotes everything from projects to resources to jobs. 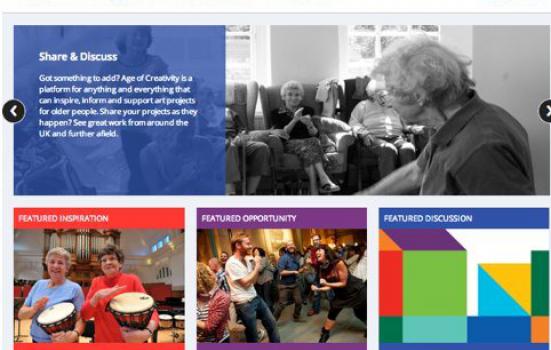 The poet Adrian Mitchell wrote some of the wisest words about growing older in his poem ‘Old age report’. He urged us to transform our attitudes and cut loose: “To hell with retirement”, he wrote, “… let them advance.” As a society we have limped rather than sprinted towards this vision of an older age, where people fulfill their dreams as well as cherish their memories. But led by some inspiring exemplars of creative living to the very end − from bon viveur performer George Melly to the supercharged maestro Sir Georg Solti − we are waking up to realise that George Bernard Shaw was spot on: “We do not cease to play because we grow old; we grow old because we cease to play.”

‘Age of Creativity’ is a new website which aims to unite the community of arts providers across the UK. The initiative is supported by the Baring Foundation, which has for a long time pursued its vision of enshrining the arts as an essential part of life rather than a luxurious extra. Launched in December by the Minister for Culture, Communications and the Creative Industries Ed Vaizey, we hope the website will become a hub for inspiring projects involving older people and the arts, and also be a place for those working in the field to share resources, discuss common issues and find opportunities for work. If we seize this communication and sharing opportunity, we can surely grow the scope and scale of provision of arts activities for older people at different stages in their life journey.

In a society addicted to the cult of youthfulness, we have allowed our older citizens to fade from view

The background to this is the longstanding, untold story of exclusion in older age1. In a society addicted to the cult of youthfulness, we have allowed our older citizens to fade from view, and we accept a situation where nearly two million of them survive on a level of income below a recognised poverty line, where over half of those with the terrible and terminal disease of dementia live without diagnosis and proper support, and where – perhaps the cruellest one of all – one in ten over the age of 65 feel lonely all or most of the time.

Arts and culture have actually made things worse. Down the ages, from the many ‘Ages of man’ tableaux in literature and painting, though Durer and Goya to modern media, ageing has been portrayed as a steady descent into decrepitude2, with Shakespeare topping the gloom parade3. And this is actually how things turn out in terms of our steady withdrawal. Recent Government surveys show how participation in ‘quality of life’ activities including the arts plummets in later life. Across leisure, arts and social activity the proportion of each age group taking part falls dramatically. At the very time when we have most time to ‘have a life’ we spend less time enjoying that life.

Nor have organisations for older people championed the arts enough. Our understandable absorption in fighting for better pensions and care has ignored the things which make our days hum. It is not surprising therefore that provision for older people has been sporadic, and has been part of the pervasive view of the arts as a narrow, marginal interest area, dispensable at a time of economic stringency. Witness Newcastle City Council’s plans to cut most if not all of its arts budget (AP260, P7).

In spite of this there are many inspiring examples where the arts have lifted lives:

Singing is prominent in the review literature. For example, the major randomised study by the Sidney de Haan Centre established clear health gains for participants4. Singing features highly in many creative arts programmes run by local arts organisations, local authorities or charities. I have just been fortunate enough to join the Birmingham-based choir Ex Cathedra, which prides itself on achieving the highest standards of concert performance but also works in the community, for example, with hospital patients to recover vocal powers after a stroke. The popularity of singing as a community pursuit has accelerated across all age groups. Research has established clinical benefits to health, such as reducing blood pressure, but its popularity owes much to the naturalness and ease of singing, and the fact that it is inherently a social activity.

Artistic expression gives people ‘agency’5, and that feeling of empowerment is the most important asset of all that we need in tackling the challenges of older age. There is a profound dimension to the arts in tackling loneliness and poor mental health6,7.

The Age of Creativity website is designed to be curated by those who use it, to be a true community site. Anyone can upload an inspiring project, a resource they think would be useful or an opportunity such as a conference or job. We have worked hard to make sure this is easy to do even for relative computer novices. The site you see today in all its vibrancy is a true testimony to the passion and creativity of those working in this sector. We hope in particular that those running services for older people will start to take note and make use of the site to commission new work and inject creativity into what they do. Or indeed that older people themselves might commission artists directly, pooling their personal budgets.

When I visit the website I am inspired by the possibilities of what can be achieved with vision and commitment. We hope that the community you and other readers work in will be attracted, inspired, informed and signposted so that we all help one another to grow the movement of arts for people growing older (a rapidly increasing population), for all of us to have something worth getting out of bed for on a cold, dark morning.