Anna Franks celebrates the art of an ‘invisible’ white minority 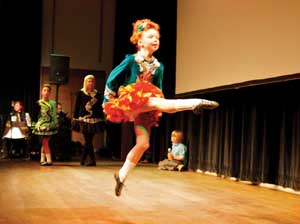 Ireland as a country is culturally inspiring. Fact. From the renowned writers, playwrights and poets such as Joyce and Synge through to more contemporary contributions such as Heaney’s poetry, showcases such as Riverdance and bands such as U2. Irish audiences have always engaged with the arts: established cultural festivals such as The Wexford Opera Festival, Listowel Writers Week and Cork Jazz Festival reflect the appetite of Irish audiences to engage with diverse cultural activity. Ireland is also known for its emigration and as a result its cultural traditions have found audiences right across the globe. Irish migrants in the ’50s and ’60s brought Irish music, dance and song to Britain. These traditions continue to be passed on ensuring the reach of Irish culture extends into new generations.

Venues with high Irish populations in their catchment have taken advantage of this strong Irish cultural activity and their relationship with their local Irish audience and used it to inform programming. Holly Conneely, Marketing Director at the Tricycle Theatre, notes: “When the Tricycle Theatre in London opened 30 years ago, in an area known as ‘County Kilburn’ by its large Irish community, one of the theatre’s core aims was to be at the forefront of producing stimulating work reflecting the surrounding community. Over the years the theatre has developed a loyal Irish audience interested in the excellent cultural output from Ireland and confident in our choices in programming.”

This excellence is clearly evident in the contemporary interpretation of the Irish cultural mix in Britain today. Fuelled by Ireland’s current wave of emigration the Irish creative community is generating a vibrant scene for Irish culture in Britain. Contemporary companies, artists and performers, such as hammerstep (a mix of contemporary Irish dance and beat box); JuSt Theatre Company (two exciting young Irish artists writing and producing new theatre) and Jonathan O’Dea, a visual artist currently working on ‘Changing Spaces’, a Cultural Olympiad project, are just a handful of examples of a new contributions to Irish culture in Britain.

Established Irish venues also remain integral to the wider national portfolio. “The Irish Cultural Centre (ICC) plays a crucial role in promoting Irish arts and heritage in London,” says Catherina Casey, General Manager. “Our doors are open to everyone, not just Irish people. Our key focus is an in-depth programme which features Irish language, literature, music, storytelling, dance and more. In addition, the schools outreach programme is an active and crucial aspect of the Centre’s work as it allows young Londoners to become familiar with their nearest neighbours.”

So what does this mean for the British cultural sector? Whilst traditional work remains fundamental to Irish communities here, new activity is flourishing and the Irish contribution to the arts and culture scene in Britain has much to offer contemporary audiences. In March the Federation of Irish Societies, the umbrella body for Irish organisations in Britain, will launch ‘Ireland Inspires’. With the eyes of the world on Britain for London 2012 we aim to ensure that the Irish community takes it place on the cultural stage as a key contributor to the diversity of the cultural scene in Britain. Across Britain the campaign will:

But there is some serious work to be done if the campaign is to achieve its mission of extending reach into new audiences and ensuring the Irish contribution is an integral part of British cultural agendas. Being an ‘invisible’ white minority and such close neighbours to Britain has frequently meant that the Irish cultural offer has not always been recognised as distinct. However inroads are being made – Arts Council England recently funded ‘Made in Ireland: Irish Arts in Britain’ – the first gathering of Irish arts and cultural professionals working in Britain. Over 80 arts professionals attended the day to start the conversation.

Developing high profile events like this is just one output of the Federation’s cultural work, all of which is underpinned by our Cultural Strategy 2012–2016, which creates a blueprint for our communities’ ambitions. London 2012 will provide a crucial platform to cultivate, create and sustain a cultural legacy reflective of the unique role and influence of Irish communities in Britain. Our ambition finds its energy in the celebrations of the Olympics but it is fuelled by the opportunities that lie further ahead.

Contemporary Irish arts are thriving but tradition remains as important as ever and a ‘céad míle fáilte’ (A hundred thousand welcomes) is something audiences will always experience.