The word’s the thing

How can literature and publishing thrive in the wake of Creative Scotland's review of the cultural sector, asks Andrew Ormston. 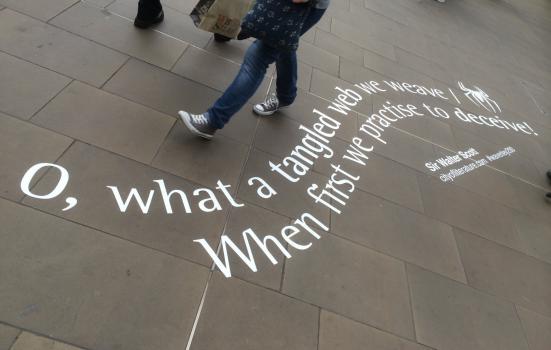 Will we ever understand how arts, culture and creative industries combine to such astonishing effect? This ‘diverse, complex and, at times, delicate ecosystem’ is how it’s described in the foreword to Scotland’s latest literature and publishing sector review. I worked on the review, grappling with a sector where the traditional demarcations of art and industry now shift in the sands of massive changes to how we produce, distribute and engage with the written word. It was no surprise that the review’s commissioner, Creative Scotland, saw this work as path-finding for a wider strategy for the creative industries.

The integrating of Scottish arts and creative industries under one national body was a bold move, rightly attracting international attention, even if early teething problems led to a string of bad press. A period of relative calm and hard graft has seen progress in areas like film and visual arts. The world around the sector has also not stood still and there is real traction behind creative placemaking in cities such as Dundee and rural environments like Dumfries and Galloway. Creative ambition and an appetite for international partnership run through the Scottish government, and its strategies and established assets continue to deliver. This year’s Edinburgh International Festival and Edinburgh International Book Festival have once again increased their audiences and impact.

But the arts and creative industries conundrum is a hard nut to crack as we just don’t know enough about their interdependence. The Warwick Commission pointed to the importance of this interface naming it an ‘ecosystem’, but our attempts to unpick it remain clumsy in relation to a sector that is constantly changing shape. We don’t even know how the different types of innovation in the cultural and creative industries work together, from recombination and re-use, to origination and invention. We just know we need them all.

There are symptoms of this misapprehension of the sector everywhere. Literature and publishing must sometimes appear as a daunting and writhing mass of creative micro-businesses to our enterprise agencies. Small and medium-sized enterprises (SMEs), whose primary concern is the quality of their artistic output, can be perceived as lacking ambition and relevance by agencies judged on their contribution to employment and wealth creation. Small publishers and literary organisations can in turn be intimidated by the administrative demands and risks of the various investment programmes for SMEs. This does not, however, represent an incompatibility between the developmental needs of artists and creative industries. Grant-funding to nurture writing excellence and its appreciation, and investment for the publishing and promotional platform that sustains it, are both needed for a healthy literary ecosystem.

As yet, we lack a mechanism that fully combines the detailed sectoral knowledge of Creative Scotland, the business skills of Scottish Enterprise and the research skills of Scotland’s universities, when it comes to specific investment plans and decisions. As a result, there is a risk that key funding streams such as the European Structural and Investment Funds (ESIF), the new Creative Europe guarantee fund and the SME-focused elements of Horizon2020 may pass by key creative sectors, including literature and publishing.

Scotland’s culture has always been outward-looking, reflected in the languages of its writers from Scots to Gaelic to Shetlandic, and there is an appetite in the sector to develop and deepen international links. Edinburgh International Book Festival is but one of a number of organisations increasing its international reach every year. But the relationship-building required is beyond the means of smaller organisations which will need more support to reap the rewards of international partnerships and market development. It has been encouraging to see key agencies like Publishing Scotland looking to deepen its role in this area following the review.

There are also spatial challenges and opportunities in Scotland itself. The combination of literary heritage, activity and innovation in creative cities like Dundee, Stirling and Glasgow are a national cultural asset. Edinburgh was the first UNESCO City of Literature and this is currently providing a platform for the development of a literature quarter that links a cluster of literary organisations on the Royal Mile. Not only can this be one of the world’s leading literary destinations, it can also be a gateway to literary trails and events throughout the country.

While the current ‘cityfandom’ epidemic may have its roots in successful creative city initiatives, it also has some limitations for strategic thinking in a country where the urban and rural boundaries are so indistinct, and meaningful urban units can be the size of a neighbourhood watch area in London. It has led to a literary culture, with the rapid growth of literary festivals and storytelling supporting a marginally higher earnings profile for Scottish writers than the UK as a whole. However, public spending pressures and changes to the traditional role of the public library means that literature development is now something of a postcode lottery. New geo-demographically and culturally defined creative clusters and hubs may be one answer to ensure that everyone in Scotland can access local, national and international literary developments. Established centres of excellence, such as Dundee’s libraries, Glasgow Women’s Library and Moniack Mhor (the rural creative writing centre in Inverness-shire), can provide a backbone for this type of approach, and new poetry cabaret initiatives like Rally & Broad will keep it fresh.

Literature and publishing are the canaries in the cage of Scotland’s cultural and creative industries. An internationally recognised literary heritage, closely aligned with national identity, makes for widespread recognition of the importance of Scotland’s writers and publishers. But this is no protection against fundamental global changes to the sector, particularly online retail and digital publishing. What is clear is that creative talent and innovation will secure the future, and for that to happen we need a lively and outward-looking literature scene that reaches across the country. This in turn means that both cultural and enterprise-focused investors must work together more effectively and be more ambitious for literature and publishing.