Sharing the joy of discovery

Andrew Ormston reflects on scientists’ appetite for collaborations with artists 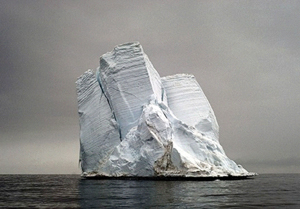 Are scientists interested in working with artists? And why, after a career spent in working with ‘art and’, had I not come across art and science? Such questions arise from my recent foray into the geosciences and consequent work with the art science collaborative network, ASCUS. Thanks to Professor Martin Siegert of the University of Edinburgh I was able to pursue these questions with the 500 or so delegates at the Eleventh International Symposium of Antarctic Earth Scientists in 2011. The delegate pass is now my favourite neckwear badge of honour. Even Herzog’s ‘Encounters at the End of the World’ did not do justice to this fascinating cohort of ice obsessives.

The only reason to be in Antarctica, tourism apart, is to be doing or communicating science, and it provides a peculiarly evocative and transparent lens through which to view the planet. It has captured the attention of artists like Simon Faithfull, Pierre Huyghe and Anne Noble, as concerned about the human impacts of climate change as their scientific cohabitants. ‘Artists doing things scientists can’t, providing data where there is none’ (1).

The leading academic journal for art and science, Leonardo, honours an artist whose practice rested on ‘art’ as skill and ‘science’ as knowledge. The wrenching apart of art and science may be less than 200 years old, but the disciplines are currently alarmingly disengaged. Early career scientists don’t always find it easy to pursue trans-disciplinary working, including collaboration with artists, and find leaving their disciplinary ‘home’ can be a risky business.

An electronic survey of ISAES delegates was completed by around 80 scientists from around the globe, and the results were followed up with interviews over two days at the event itself. The aim was to identify drivers and barriers to trans-disciplinary working, moving on to an enquiry into science and art collaboration in particular.

Delegates associated interdisciplinary and trans-disciplinary working with innovation in research, although more established scientists were cautious about its value when under pressure to raise funds and achieve results. Some early career scientists had experienced this as an obstacle to pursuing work with colleagues from other disciplines. There was widespread support for science and art collaboration but low awareness of organisations engaged in it.

Unsurprisingly the three areas of practice consistently flagged up related to the communication of science, public engagement and visualisation of data. When it comes to public engagement and communications scientists often see the artist as ‘a special layperson, sharing an interest in observation with the scientist’. The contribution of the artist in ‘turning vast squidchs of data’ (as one interviewee described it) into something people can understand was widely acknowledged, although some respondents voiced reservations about superficiality and the transitory nature of some science and art collaborative initiatives. This issue was echoed in subsequent interviews with ‘sciart’ pioneers who have been working to embed the artist in the lab as part of longer-term research programmes.

Interest in the bringing together of art and science is growing for all sorts of reasons. Cape Farewell and the British Antarctic Survey are but two organisations that enlist artists as communicators of scientific evidence. The Australian Network for Arts and Technology encourages creativity and science for economic and technological ends. The excellent Arts Catalyst in London is continuously opening up opportunities for trans-disciplinary work and exchange both in the studio and in the lab. The Wellcome Trust have evaluated a decade of arts projects, and Arts Council England Chief Executive Alan Davey blogs about the marvels that could result from a coming together of the two sets of practitioners.

A thematic analysis of the research found that the visualising theme was particularly strong for a scientific cohort that ‘think visually’. The artist as ethnographer or historian featured in a ‘remembering’ theme, addressing the way in which scientists use the past to predict the future. An early photograph of a glacier or an aural history of snow go where computer simulations cannot. Humanising, imagining and embodying themes address the ‘technological arrogance’ of some scientific practice and its impact on both the public and the scientists themselves. Both public trust in science and the meaningfulness of ‘de-cultured’ scientific results have spaces for artists to explore. Scientists and artists are also aware of the importance of the immersive qualities of their work: ‘the potential for discovery is what drives us. People don’t understand the excitement.’

The research clearly identified an appetite and rationale for collaboration with artists among these scientists, raising a longer-term question about how we can best support this practice. This collaborative territory goes far beyond simply communicating science. While organisations like ASCUS and Arts Catalyst will continue to nurture ‘sciart’ collaborations, should there also be some form of prospectus for science and art, a framing that can both scale up the influence and value of the work and bring it to a wider public? Can collaboration between scientists and artists provide a pathway to link scientific enquiry with our lived culture more effectively than a press release?