Why are women so under-represented in certain areas of classical music? Katherine Cooper thinks enduring stereotypes about women’s soft skills are partly to blame. 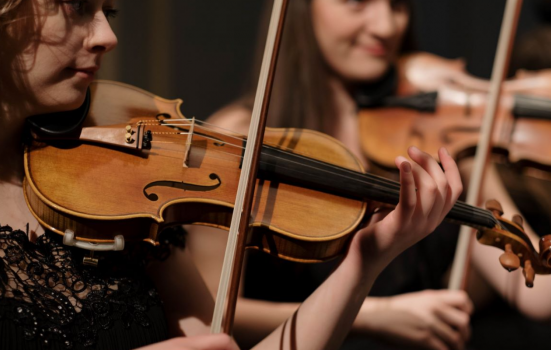 A few months into my career in the classical music industry, I struck up a conversation with an older female colleague in the interval of one of the first productions I’d been sent to review at a major venue. “Thank goodness you’re here to have an opinion! There’s plenty of us in this business these days, but it’s great to see a woman who’s not just here to make things run smoothly…”

As a rookie arts writer, it wasn’t something I’d actively registered before, but as I pondered on the journey home, I realised she had a point. Of the many dynamic, dedicated women I’d come into contact with in the business, the vast majority were in administrative or public relations roles. Only a tiny proportion were working as critics, label-managers or in senior creative positions either in live or recorded music.

It is not my intention to denigrate the women in our industry who do make things run smoothly - usually for significantly less pay than their male counterparts in strategic and creative roles. I have to thank so many of them for galvanising my career, shunting opportunities my way and amplifying my work as a young woman starting out as a classical music critic.

More than a decade later, I’m far less likely to find myself the lone female trading opinions over interval drinks. But I’m still struck by the paucity of women in decision-making capacities across the board. Melanne Mueller at Avie Records is still one of the only women at the helm of an independent classical label, with the senior teams at the majors still overwhelmingly dominated by men.

Why has this been the case historically? Enduring stereotypes about women excelling in the soft skills of interpersonal communication, empathy and emotional intelligence - rather than in more strategic capacities - are still a factor. But there are also lingering anxieties on the part of recruiters about the impact of maternity-leave and caring responsibilities on female career-trajectories.

There are some encouraging signs that the tide is beginning to turn, however. Soprano and feminist activist Anna Patalong - a founder-member of SWAP’ra, an advocacy group for women and parents in opera - has taken the helm at the British Youth Opera. And an all-female creative team was responsible for bringing Poul Ruders’s production of The Handmaid’s Tale to life at English National Opera this month.

These appointments – not to mention the ascendant female conductors such as Mirga Gražintyė-Tyla, Oksana Lyniv and Keri-Lynn Wilson – are vital for inspiring the next generation of women to believe that they can embark on careers in the music industry as leaders rather than facilitators.

A special word on composers: it’s been heartening over the last few years to see concert venues, festivals and record labels - usually smaller independent ones - programming more music by women. But there’s still scope for more major artists, organisations and labels to really get behind these sorts of projects.

This summer Glyndebourne takes a step in that direction with their production of Ethel Smyth’s The Wreckers, and the Philadelphia Orchestra’s splendid recording of two symphonies by the African American composer Florence Price scooped a Grammy in this year’s ceremony.

Those of us in a position to amplify the work of female composers and creatives, through media channels, should seize the opportunity to do so. Though how this work is framed and discussed in some outlets is questionable. Take for example, broadsheet reviews of Katie Mitchell’s production of Lucia di Lammermoor in Covent Garden a few years ago. Her vision was dismissed as ‘dotty’ and ‘hysterical’ – adjectives that would never be applied to the work of male creatives.

And journalists must check any tendency to invite men to speak for women. One of my own early missteps involved interviewing a prominent male artist about interpreting a female composer’s work instead of approaching the composer herself. I know better now.

Hand us the microphone

I’m on the fence about quotas and whether they are the best way forward. But I’d love to see arts organisations actively head-hunting female creatives and executives instead of being deterred from hiring them because their CVs look different from their male peers. Peers who likely had a head start in the industry because of persistent gender-stereotypes or a tendency to recruit from within existing networks.

A colleague recently reported a conversation with a festival director who accounted for the absence of female directors, designers and producers on the roster by admitting that he tended to hire from his own social and professional circle - almost exclusively male.

We hear a lot about the need for women to speak up within the music industry and beyond, but to do that we need our supporters to hand us the microphone. Lasting, meaningful change requires allies to make room for women’s voices to be heard in spaces where they can make a difference – not only on stage, but in our rehearsal spaces and boardrooms too.

Katherine Cooper is Head of Editorial at Presto Music.