Sustaining a democratic and caring society

The EBacc debate in Westminster prompts Patrycja Kaszynska to reflect on the role of the arts as a force for political and civic engagement. 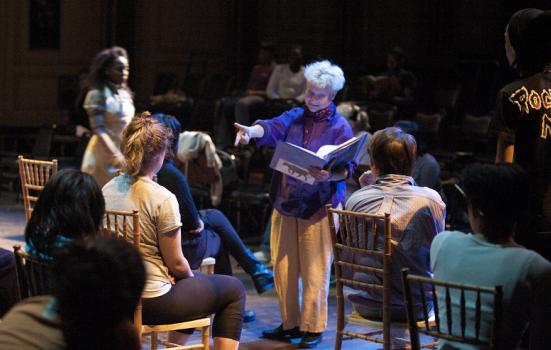 As Parliament set out to debate the inclusion of creative subjects in the English Baccalaureate (EBacc) on 4 July, many feared that the discussion would be entirely overshadowed by the reverberations of the referendum vote. This was not quite the case as supporters, MPs and the relevant officials did turn up and the debate did receive some media coverage.

On the surface, pondering the value of arts subjects might have seemed a welcome distraction from the political storm sweeping across the UK, but the language and arguments used in the EBacc debate revealed some urgent thematic continuities with the soul-searching and reckoning in the aftermath of the vote on 23 June.

Both the introduction of the EBacc, and the aspiration to roll it out to over 90% of school students in England by 2020, have raised some concerns over the fate of non-core subjects, including design and technology, drama, media film and TV studies, music and performing/expressive arts.

Worries that these subjects may be marginalised have been precipitated by the decline in the take-up of arts subjects at GCSE that has already been observed. In the run-up to the debate, more than 200 creative organisations called for expressive arts subjects to be included in the EBacc, and more than 100,000 people have signed a Parliamentary Petition opposing the exclusion of art, drama, music and other creative subjects from the EBacc, triggering the discussion in Parliament.

A range of arguments were heard in defence of arts education, some resting on the economic case, but economic arguments are not without problems. For instance, many elide the distinctions between the effects of cultural engagement (both formal and informal), the outputs of the cultural sector and those of the creative industries at large, and evade the question of what is actually being quantified so long as the calculations yield big numbers.

But some recent studies, such as NESTA’s The Fusion Effect: The economic returns to combining arts and science skills have rigour and diligence, and in this instance, make a convincing case for the economic benefits of arts education.

Notwithstanding the importance of creative skills for economic performance, the majority of the arguments rested their case on the importance of ‘creating well-rounded human beings’. Many stressed the need not to foreclose the possibility of partaking in the arts for those from less privileged backgrounds.

Rightly so. Recent years have seen a number of longitudinal reviews of arts learning and arts participation in relation to wider achievements beyond narrow academic outcomes. For instance, the work of Catterall and colleagues showed a clear correlation between arts learning and improvements in wider cognitive skills, and predispositions such as problem-solving, concentration, motivation and self-discipline. It also pointed to the formation of transferable skills such as communication and social competency skills.

This has been well recognised by middle-class parents. The existing studies show that the beneficial effects of arts learning are particularly pronounced for young people from disadvantaged backgrounds, when compared to their better-off peers, and these are the children who – the arguments go – are most likely to miss out because of the new EBacc.

The minister present challenged the claim that the rolling out of the new EBacc would squeeze the arts subjects out of schools. Given what is at stake, we can only hope that the uptake of arts subjects will not decrease.

The longitudinal studies by Catterall and colleagues discussed above show strong correlations between cultural and political engagement. This seems to be more than the result of shared characteristics among participants in the cultural and civic spheres (the correlations hold even after controlling for variables such as educational attainment, income, class, gender and religion).

But political participation is not just about voting and this is where the connection between the EBacc discussion and the Brexit referendum becomes explicitly apparent.

American philosopher Martha Nussbaum has argued that there is a crucial link between cultural engagement and an ability to act as a global citizen in a democratic system. The arts play a role in generating “vital spaces for sympathetic and reasoned debate, helping to build democracies that are able to overcome fear and suspicion and, ultimately, creating a world that is worth living in”.

Role of the arts

Could it be that by diminishing access to arts learning we might be cutting off the blood and oxygen supply necessary to sustain a healthy, democratic and caring society? Short of constructing counterfactual scenarios, which would allow for a comparison of the world with and the world without the arts, the effects of cultural engagement are difficult to capture.

The arts act on both affective and cognitive registers and shift individual attitudes and collective behaviours through a myriad of spillover effects which are difficult to isolate and map out independently of the context of the specific situations where they are embedded.

Not surprisingly, the many claims made throughout history regarding the alleged role of the arts in creating the pre-conditions for democracy, public deliberation and social cohesion have rarely been tested empirically and are often speculative in character. And yet they are not without support.

One strategy of the AHRC Cultural Value Project Report was to examine a case for the role of the arts in fostering civic and civil engagement (including opposition and dissent) from the bottom up. It looked at how cultural participation nurtures reflectiveness, empathy and imaginativeness and how these in turn might feed into ‘other-regarding’ behaviours.

Individual changes cannot be just ‘aggregated’ into collective processes. We still understand too little about how those subtle transformations to how individuals think about the world translate into social and political change.

Case studies allow us to draw some conclusions, albeit partial and limited. What emerges from a number of carefully constructed case studies discussed in the Cultural Value Project is that cultural engagement has far-reaching effects on how individuals translate their ‘private troubles into public issues’.

The case studies ranged from how the people of Ilfracombe in Devon responded to two very different artworks, and an insight into how the Wigan Diggers’ Festival might express a quest for alternative political realities, to an account of how different ethnic identities co-exist, in harmony and in tension, in the public ceremony at the Chattri Sikh Memorial in Brighton.

While not offering easy fixes, arts participation may lead to an improved understanding of other people’s world views. It fosters an ability to accept ambiguity and make independent judgments (which is different from assertions of one’s gut feeling). Above all, cultural engagement allows us to pause, reflect and question the automated, authoritarian habits of thinking.

Crucially, it does not stop there. These individual changes lead further to more open and positive relationships and more other-regarding behaviour. This might not yet be a fully fledged demonstration that the arts are invaluable when it comes to building those ‘vital spaces’ Nussbaum talks about. The case studies in the Cultural Value Project Report do leave us with a fair idea of how the arts may support and nurture the ways of thinking, talking to each other and being together, which were sorely missing in the pre-referendum campaign.

Given that we know exposure to the arts in childhood is a stronger predictor of adult arts participation than education, gender, age or income (according to the US report A Decade of Art Engagement mentioned earlier), we probably know enough to understand, without taking too big a leap of faith, how much is at stake in ensuring that our children have access to arts education.

Patrycja Kaszynska is Post Doctoral Researcher at the Arts and Humanities Research Council.

Correction 21/10/16: A previous version of this article stated that 1% of young people with low socio-economic status and low artistic engagement voted in the 2004 US presidential election, but the correct figure is 31%.

"...while just 1% of young people with low socio-economic status alongside low artistic engagement voted in the 2004 US presidential election, 45% of those with the same socio-economic status but with a high level of artistic engagement did so." I think the 1% should be 31%. See https://www.arts.gov/sites/default/files/Arts-At-Risk-Youth.pdf p21.
Thanks for spotting this, Aziza - we have made the correction. 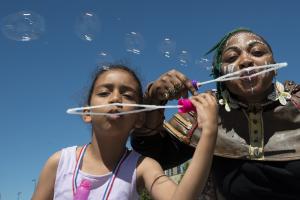