A step change in cultural partnerships with Higher Education

The moment for information and peer support to develop partnerships has never been more timely. Evelyn Wilson has established a new centre to provide that infrastructure. 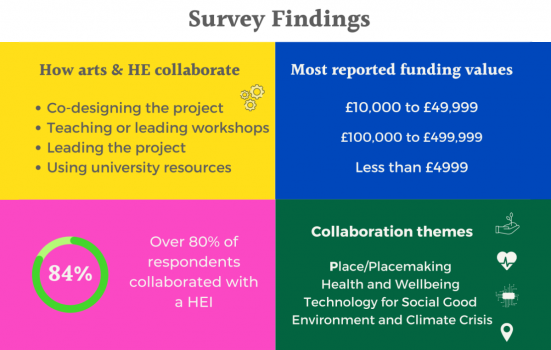 Earlier this year, The Culture Capital Exchange (TCCE) was delighted to launch the new National Centre for Academic and Cultural Exchange (NCACE), funded by Research England to run until Autumn 2024. And during the coming year, we will be making some much needed noise about the benefits and values of cultural partnerships with Higher Education.

The aim is to highlight the impacts of partnerships and their potential to amplify the narrative around important initiatives taking place throughout the UK. In this article, I want to introduce the work of the centre, share the findings of our recent survey conducted in collaboration with ArtsProfessional, and outline ways to get involved.

Our purpose is to support greater capacity for collaborations and knowledge exchange between Higher Education and the arts and cultural sector, and to develop a stronger evidence base about cultural partnerships and their wider impacts.

To do this, we are working with universities around the country, developing activities in the following areas: Collaboration Support and Networking; Skills and Capacity; Evidence Building and Impact Development; and Showcasing and Communications.

Our partners are: Bath Spa University, Birmingham City University, Manchester Metropolitan University and Northumbria University. All are working with cultural partners on collaborations, from relatively small projects through to large-scale, complex, multi-stakeholder initiatives that are affecting substantial capital and other developments in their respective cities.

Northumbria University has partnerships with New Writing North and BALTIC amongst many others. Bath Spa is home to Paper Nations, a creative writing incubator. Birmingham City University houses STEAMhouse, a new centre that unites talent across the arts, technology, sciences, maths and engineering. MMU is home to the Institute of Place Management which leads on the government's High Streets Task Force and is also active in many cultural partnerships.

The moment for information and peer support to develop partnerships has arguably never been more timely, particularly as we are seeing the emergence of ‘super partnerships’. These often have place-making and a civic remit at their core, often involve an array of different stakeholders and often, and increasingly, align with broader social, cultural and economic agendas.  All this at a time when the government’s levelling up agenda continues apace and funding is increasingly flowing beyond the capital.

Relationships between the arts and education are no new phenomenon. But there is so much more to know and so many stories to tell about the nature of these partnerships: how they came about, how they’re evolving, the investments that are supporting them and, crucially, the wider impacts they are making.

This is the work that we will be addressing through our Evidence Hub in the coming years. The hub comprises two strands. First, an Evidence Cafe where we’re developing a community of practice and interest about how Knowledge Exchange and cultural partnerships are actually being evidenced. And secondly, an Evidence repository of blogs, reports, papers and other important materials and information relating to partnerships between Higher Educations and the arts and culture sectors.

The survey: Collaborating with Higher Education

One of our first activities was to develop the Collaborating with Higher Education survey, in association with ArtsProfessional. We received 546 responses from across the sector, 84% of which either currently, or have been, working with universities. Given the title of the survey, perhaps that high figure was not surprising. However, we were fascinated and heartened by the sheer diversity, scale and nature of collaborations that were reported.

There were amazing and inspirational accounts of collaborations from individual artists and cultural practitioners; from a photographer co- researching gender equality in farming to a writer/composer contributing to a major publication on Black British History. We also heard from hundreds of arts organisations about their partnerships.

Unsurprisingly, many of these had a health dimension. One respondent told of the creation of a trilogy of theatrical pieces about the historical treatment of mental health that involved several academic partners. Another related a collaboration focussing on bringing together arts and nursing students to enhance patient experience.

There were many accounts too of projects relating to the cultural ecosystem of a specific city or area. These place-based collaborations ranged from the co-development of major bids to establish new cultural infrastructure in smaller cities, to the development of new partnerships between existing art spaces and university partners, resulting in multiple benefits to both parties and beyond.

Overall, we’re witnessing lots of wonderful small and often transformational partnerships. Both this survey and our own research are starting to indicate there is a shift taking place with a significant trend towards bigger, complex cultural partnerships often involving a range of partners and funders. Given the evolving nature of funding arrangements and opportunities, this suggests the game is being seriously upped for cultural knowledge exchange and that the time for such partnerships is now.

In the short space of time since we launched our public programme at NCACE, almost every event has been fully booked. We’re meeting people from across the country and seeing a real appetite for partnerships between the sector and Higher Education and of course vice versa. We are witnessing a step change and, as the Chair of Research England David Sweeney has written in his recent blog, what step-changes need are “both inspiration and the development of robust tools and skills” as well as vision and enthusiasm. There is, of course, one final piece in the jigsaw and that is more diverse sources of support and joined up thinking to ensure that this step change is one that really does reach its potential.

Evelyn Wilson is Co-Director at NCACE and TCCE

Sign up to the NCACE Monthly Bulletin
Here is the snapshot of our Arts Professional Survey findings.

Arts and academic collaborations in placemaking
A step change in cultural partnerships with Higher Education
How ‘perky’ are you? Why happiness is the key to workplace productivity
Reflections on resilience
Getting to grips with intellectual property
Survival skills for the new normal
The power of research