Spying on your audiences

How can you find out what your audience really thinks? Ron Evans recommends observing them using your very own spy network. 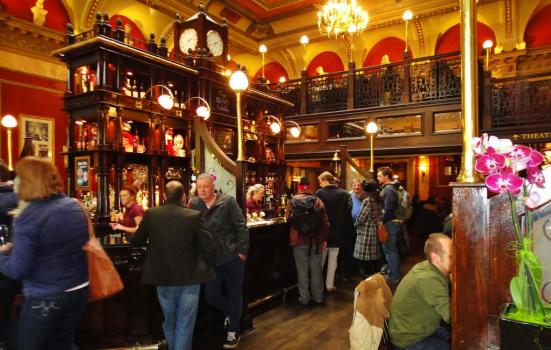 The Old Joint Stock Pub and Theatre in Birmingham
Photo:

Gareth1953 All Right Now on Visualhunt.com / CC BY

If you see me in the lobby of a theatre murmuring into my mobile, don't be fooled. The phone is just a prop to disguise the fact that I’m really observing you, the audience.

Welcome to the world of patron observation. I have taught staff in some exciting theatres how to dramatically improve customer experiences through observation and experimentation. The mobile trick is one of many socially acceptable behaviours I use to cover my surveillance. It's all about blending into the crowd: observing behaviour, but not affecting it.

People in the middle

Why all the clandestine shenanigans? Why can’t the organisation just send out an online survey asking what they could do to improve a visit. They could. But online surveys often suffer from low response rates and are usually incomplete. Respondents are frequently split between those who love you and those with an axe to grind. The people in the middle you really want to hear from probably won't respond.

Getting something running is great, but that’s when the observation and experimentation begin

But those very people loudly complain that the sound equipment is failing and they can't understand the actors. They distractedly walk right by the fancy brochures and email sign-up lists you’ve so lovingly organised. They grimace when they don't like the wine. People leak their preferences through their actions. To truly understand your audience, you have to be there: watching, listening, looking for patterns, anticipating needs and solving problems in real time.

One client wanted the audience to answer a paper-based question about why they chose to attend the performance. We found that the respondents were disproportionally female (even for a cultural audience). So I watched. Men would pick up the form, skim it, smile and put it back without answering. Why were they behaving this way? They didn’t have anything to write with. The next night, we distributed pencils in addition to the forms, and the response from men skyrocketed.

Another client was baffled about why the custom guitar plectrums they had created as a surprise after-show gift weren’t being accepted. It turned out that the volunteers were using deep baskets to hold the plectrums, and patrons were being asked to put their hand in the basket and pull one out, unseen. Volunteers had only seconds to communicate that it was a free gift, that they needed to reach in and it was a guitar plectrum. Patrons weren't getting it. I watched them recoil as if the baskets contained cobras.

We discovered that something about the baskets and the volunteers' body language were triggering patrons to think they were being asked for money. It didn’t matter that their ears were hearing otherwise. So we switched the deep baskets for wide, shallow trays, added a notecard that said “Thanks for coming!” and patrons couldn’t get enough. We ran out of guitar plectrums as people wanted to take extras home for their friends.

Observation and experimentation also directly benefit the bottom line. If you simplify your subscription form, will people be more likely to fill it out? How about revising the wording of your online donation page, and then watching the results? I’ve created startling improvements to both.

Many cultural groups get trapped into thinking that something is working, so they move on to the next thing. I call this ‘check-off mentality’. Once the idea is implemented, it doesn’t need further attention, because there is another fire to put out.

Fight that urge. Getting something running is great, but that’s when the observation and experimentation begin. It is this continual exploration of what is working – and what might work better – that yields dramatic benefits. Implementing your own observation and experimentation programme is easier than you might think. Start with the resources you already have available, as follows:

When your customers are happy, the rewards are substantial: loyalty, repeat attendance, positive word of mouth, donations, volunteerism, board service and a glowing reputation. The cultural organisations that are winning today understand the value in constantly testing to improve customer experiences. And a few harmless cloak-and-dagger tactics don't hurt.

Ron Evans is a strategic arts advisor working in the US.
askronevans.com
Tw @askronevans