A recent survey found that four in five Londoners would contribute at least £2 towards public art in their local area. Marine Tanguy and Vishal Kumar explore the potential role of citizens in new commissions. 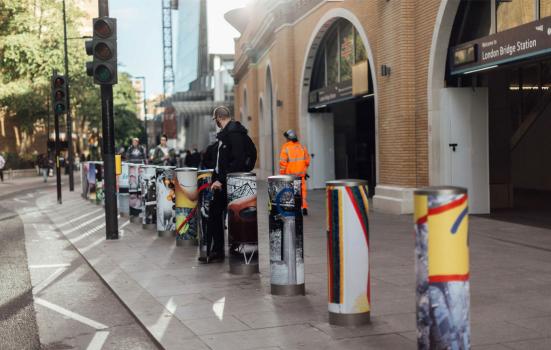 Contemporary research and debate about the future of our cities tend to focus on technology, architecture and infrastructure. And so very little empirical evidence or academic studies exist to determine whether or not public art is core to the life and needs of citizens. The study we have carried out is one of the first to demonstrate a desire from citizens to have more public art, and significantly a willingness to pay for public art projects.

In the current structure of the art industry, only a few individuals choose the public art that has an impact on the local population

While public and private organisers of public art commissions are aware of the cost and value of the art when commissioning their projects, they often lack the knowledge to the extent that communities and networks value these initiatives and how much they would be willing to support future projects.

In total, we surveyed 469 respondents across London Bridge and Whitechapel during two MTArt Agency commissions. Our results found that 84% of respondents were willing to pay £2, and 84 % of all respondents said that more public art in their city would improve their wellbeing.

The study has already had a positive impact on city authorities, policymakers and those shaping the urban landscape regarding public art. For example, the Mayor of London Fund and Euston Town Business Regeneration District commissioned artist Jasmine Pradissitto from MTArt Agency for a sculpture which uses a geopolymer to absorb harmful pollution, such as nitrogen dioxide, from the air.

The agency has seen an increasing demand for these types of projects, and yet many representatives of the public sector are still hesitant to commission new ones. In the current structure of the art industry, only a few individuals choose the public art that has an impact on the local population. But by asking citizens what sort of artworks they would like to see will be one way to build a dialogue between them and the politicians. It also brings transparency into these projects.

With our study, we also wanted to show that audiences are willing to financially contribute if they had a say in the projects themselves. If public bodies were to use this method it would open up a new area of funding for public art projects, where culture could be defined from both the bottom-up and the top-down.

As we see more citizens supporting public art projects, their demand is towards more socially engaged artists, with topics ranging from sustainability to gender issues. For us, it’s interesting that the narrative of the art appearing in cities is being driven by a more democratic attitude than in the past. In turn, the story of the city as we know it may then change.