A new home for cancelled festivals

Lucie Andersen-Wood explains how this year’s festivals have combined oral tradition with broadcasting – and given performers a new home. 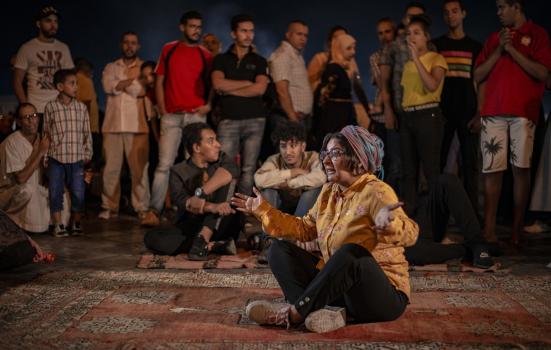 ‘Pivot’ has become a common word this year, but when the pandemic broke my husband Mike and I were primarily focused on operating our riad hotels and wellness retreats in Marrakech. Our concept of a storytelling arts venue in the old town medina celebrating Morocco’s rich oral heritage was starting to take shape but the build was still at least six months off completion, and we hadn’t yet fully formulated plans to digitise and broadcast performances.

Fast forward a few months and the bricks and mortar café is on hold, but the line-up on the website we created in its place, World Storytelling Café, reads like a who’s who of the world’s top storytelling talent. Featuring performances from more than 170 tellers and poets across the globe, the site regularly hosts high-profile events, including broadcasting tales from the ‘Kidz Field’ as part of the Glastonbury Festival virtual weekend and leading celebrations for the Kingdom 1000 project, a human rights awareness initiative backed by Arts Council England.

Crucially, it’s also generating income for the artists. One of the initial goals for the site was to provide a financial lifeline to the tellers and a way for them to continue practising their craft remotely. Operating on a pay-what-you-can-afford basis, viewers are invited to pay into a virtual hat for each teller. The proceeds go directly to the performer via PayPal.

How did this come about? Serendipity had a big role to play in the success of the site, coupled with hard graft, grit and determination.

When lockdown began, we were already in talks with some of the members of the storytelling community. While speaking to John Row, a veteran of the UK festival scene, we had a Eureka moment. We realised storytellers were going to be in lockdown and a lot of people were going to be at home – so there would be an audience. Mike started working on the project in earnest during self-isolation, bringing in a web developer to create a platform to showcase the tellers’ talents. John took charge of curating the performers and content. The website went live and the first test performance was broadcast on March 22.

There is great solidarity on the global festival circuit and we quickly found we were being inundated with applications from esteemed tellers around the world. The site developed rapidly in the first few weeks; videos were uploaded from Argentina to Australia, South Korea to Switzerland, the Caribbean to North America and Canada, in languages including English, Welsh, Spanish, Romanian, Finnish and Arabic.

The next step was developing the live broadcast function, and from here we set our sights on becoming a virtual venue, a place where any spoken word project could find a home. The site has even facilitated the use of storytelling as therapy for people recovering from addiction.

As a psychotherapist, I am aware of the healing power of certain stories and the transformational potential of telling our own story. To this end, we added a section called ‘My Story’ where aspiring writers, storytellers and the general public can share their own real life, fictional or traditional tales. A young man from Algeria, for example, shared his story of having a stroke at age 27. The deeply personal account describes his painstaking recovery and inspirational resilience. Every Sunday, using techniques from my training as a clinical hypnotherapist, I tell healing stories that use guided imagery and relaxation techniques for stress reduction and empowering thoughts.

What materialised has exceeded all our wildest expectations. We now broadcast daily at 6pm UK time, with a second performance timed to suit the time zone of the teller, as well as hosting regular weekly slots.

There have been disappointments and challenges along the way, as was to be expected as such early adopters of virtual performance during the pandemic. Inevitably we faced competition and lost some of our audience once other event organisers came online. But the biggest blow came when we realised the disadvantage of relying on YouTube as the main broadcasting platform: the channel is blocked in most schools and many workplaces, thwarting the educational aspirations of the site. It wasn’t a disaster, but it was a lot of work to move the archived performances over to Vimeo.

But the benefits far outweigh the trials. We’ve been able to provide a steady revenue stream for performers – sometimes more than they earned from live gigs – as well as greater accessibility and inclusivity. Viewers don’t have to be able to afford to buy festival tickets or travel to where an event is being held, and many of our performances are suitable for audiences of any age. Anyone can access world-class entertainment from the comfort of their home, office or school.

Meanwhile, the tellers are exploring innovative ways to adapt to the new medium. A weekly, themed “Connecting the World” omnibus featuring a wide variety of outstanding tellers has become one of the flagship broadcasts. A young tellers’ group has recently been established too, bringing together storytellers from across Europe and the Middle East to perform and socialise with people from other cultures. At the same time, these young creatives can access mentoring from some of the best in the business.

What does the future hold? Thanks to the exceptional relationships built through the process, we have plans to bring an actual storytelling festival to Marrakech. Shorter-term, we want to bring more projects online; we are interested in hearing from anyone with an audience in need of a venue! With the mechanisms we have in place and the technical support we can provide, it’s going to be exciting to see where the site goes next.

A new home for cancelled festivals