New Deal for the arts

The more you look at the cultural aftermath of this year of lockdowns, the clearer it becomes that current thinking around arts funding is a missed opportunity, Anthony Sargent writes. 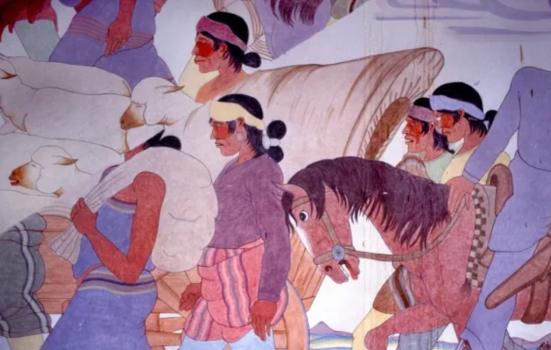 Reading between the lines of recent arts funding news - like the proposed DCMS Economic Model for arts funding and the thinking reportedly going into ACE’s new Arts Strategy - you start to see a wider problem than just their intellectual fragility. This is a unique moment, uniquely needing a fresh approach to thinking about investing public support in the arts.

Yes, it is important that DCMS thinking better recognises the recent organic development of cultural policy in place of the reductivist mathematics of its economic model. And yes, it is important that ACE’s new Arts Strategy moves beyond what has been called “vague generalisations and arcane art-speak” at a time when much ACE-supported culture remains a minority preserve, and school and (now) university arts education dangerously risks disappearing from young people’s experience.

For the long term we do need more rationally inclusive and convincingly evidence-based cultural investment strategies, but today there are also much more immediate needs if our artists are to be supported in playing their full role in the recovery from this truly terrible year – for the arts as for society more generally.  These kinds of global catastrophe differ from event to event but looking back at past crises there is some commonality in the ways governments sensitive to the needs of the moment have responded.

America’s Great Depression pushed national unemployment up to 25%, to which Franklin D. Roosevelt responded with his visionary New Deal - constantly referenced today as Governments address the pandemic’s consequences, but often characterised just as a physical regeneration programme.  However, under that capacious umbrella also sat a wealth of cultural initiatives like the Public Works of Art Project.

By the first quarter of 1934 over three thousand artists across the country had been commissioned to produce 15,663 two- and three-dimensional artworks for government buildings. Inevitably they were of varying quality, but many captured the moment with blazingly authentic immediacy.  As head of work relief Harry Hopkins so memorably said of artists - "Hell, they've got to eat just like other people!"

In 1951 the multidisciplinary celebration of the arts, architecture and design, science and technology making up Festival of Britain radiated excitement about a new kind of future - a pathway out of the devastation and human tragedy of World War II into a creatively powered tomorrow.  People involved in its planning talk more of its improvisational effervescence than of abstract or cerebral theorising.

Not as ubiquitous as COVID-19, the SARS pandemic nonetheless wrought terrible damage in the communities it did strike. Toronto (with its ‘turning the lights back on’ mantra) responded with two major interdisciplinary festivals to re-ignite the city’s cultural communities, plus ten large-scale infrastructure projects that added a new internationally-oriented pizzazz to Toronto’s already teeming cultural ecology.

Hong Kong’s response to SARS was economically led, but its two-phase programme (Reassurance-Recovery) still made space for a wide-ranging festivals programme including a Hong Kong Cultural Industries Festival and (poignant to remember after the rupture of Brexit) a collaborative Asia-Pacific Cultural Co-Operation initiative.

The key commonality in those programmes and others like them is the way they have a human rather than an institutional focus, inspiring communities struggling to survive trauma creatively beyond just answering their material needs.

The UK’s Cultural Recovery Fund had honourable intentions but it has faced persistent questions about the delivery of its funding, failing to connect with many of the cultural communities who need it most - reflecting its reliance on traditional institution-based funding models rather than the more inclusive, dispersed kind of cultural energy this moment so acutely needs.

Creative engagement with the arts holds a uniquely potent key to wider national recovery from the devastation of Covid-19.  Realising that potential calls for an investment approach based on people and their communities rather than on institutions and buildings; on imagination rather than on formulae; and on a new forward-oriented sense of inclusion and discovery rather than an attempted return to ‘business as usual’. Instead of seeing our damaged cultural ecology through a theoretical lens, government and funding agency thinking needs a lens that prioritises visionary individual creativity.

Tonic to the nation

Looking at the 10 wildly adventurous multi-disciplinary projects making up the nationwide Festival UK*2022, completely reshaped since its controversial origins, they represent the polar opposite of traditional funding agency thinking.  Still criticised by some people (who may not yet have explored its kaleidoscopic riches and its anarchic exuberance) it may yet prove to be what we most need as a “tonic to the nation” - as the Festival of Britain’s Director succinctly defined his purpose.

Its ten component sub-festivals radiate an inclusive excitement in the best traditions of the way artists have so often offered their communities adventure and ambition at times of adversity - each festival bursting with creative energy while being developed through a rigorous R&D process, partnering evidence-based theory with passionate humanistic creativity.

For the immediate future, this kind of thinking and the New Deal and projects like them stand a far greater chance of rekindling a national sense of hope and belief in the future than formulaic, theoretical approaches.  This is not the moment for preferencing a narrowly particular, ideologically selected kind of cultural infrastructure.

After a unique moment of agonising discontinuity, this is a unique moment of precious opportunity. It cries out for a fresh, imaginatively agile kind of thinking about different ways of investing public support in our artists and their work, which could yield such an excitingly fresh, contemporary cultural landscape after the ravages of the past year. As members of a global community seeking a route forward from a global catastrophe, we need to hear Robert Frost’s agelessly wise voice in ‘The Road Not Taken’ and take the road less travelled by.  As he said, it will make all the difference.

What wise and welcome words from Anthony Sargent! It's been a long wait for an article to appear in your pages to challenge current orthodoxy, look beyond the mainstream institutions, and suggest that we have to take a radically different approach to organising the arts in the UK in the future. I did post a comment on your article about NPOs not hitting diversity targets a month or so ago, but characteristically this provoked no further response. Sadly, there seems to be no forum for frank and rational discussion of these questions, nor much interest in debating them. Artists themselves - and creative artists especially - surely have to be central to any process of reform or reconstruction borne of our experience of the pandemic, when so many institutions have proved ineffective. To be fair, the Arts Council and the Government have responded very equitably and generously to individuals and small companies - my own included. But how will this generosity be translated into future strategies and funding priorities? It would be salutary to review what different kinds or scales of organisation have achieved over the last 18 months in the face of the constraints of Covid, uncertainties of income and so on. And more than that, what plans do they have that remain capable of implementation artistically whatever Covid or the economy throws at them? My hunch is that independent artist-led companies would come out of such a review rather well. However. I can already hear Joe Never-Smile's baleful cry "where is your evidence?", to which I would respond that I've posted several articles on my Blog during the pandemic arguing the case for artists and small companies to be more widely trusted and respected. The Grand Union, which is structured on a collective rather than a hierarchical model, celebrates its 40th anniversary next May. Like Anthony, I'm sceptical of what statistics tell us about the value of art. However, in reviewing our own past for this celebration, two startling figures emerge: since the beginning, we have never done a project which involved less than 60% BAME and 40% women artists (the average is actually even higher). This is yet another example of how artist-led companies can blaze a trail in addressing inequality creatively. Tony Haynes Grand Union Orchestra www.grandunion.org.uk www.tonyhaynesmusic.wordpress.com
Thank you for your comment Tony. We are always interested in articles that challenge current thinking and welcome debate on our pages.