My Gurus: ‘it is always about the work’

Jimmy Fairhurst, Artistic Director of Not Too Tame, talks about the eclectic mix of people who have inspired his career as a working-class artist. 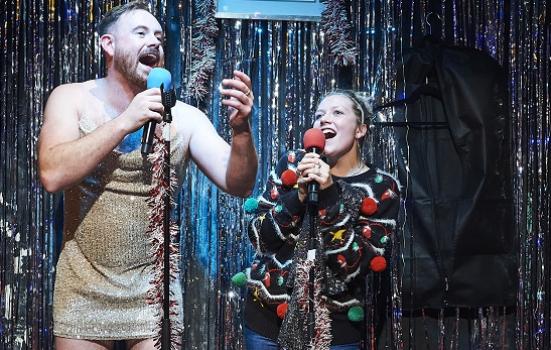 Not Too Tame's production of Cinderella.

He's my younger, cooler, more rock-and-roll brother and I would love to be half the artist he is – 'our kid' is one of the most inspiring musicians out there. Dean was the lead singer and songwriter for Slydigs, who toured extensively on their own and as main supports to various bands including US and European tours with The Who. His new band Standin’ Man are out of this world! He's an artist through and through and I've always respected his dedication to his craft; he's self taught, an avid reader of anything to do with music and philosophy and can stay up for days on end partying. I’ve seen him stand in front of 30,000 and have that audience in the palm of his hand. He inspires me each day to keep grafting, follow my own artistic voice and to challenge preconceived ways of doing things. If that isn't true rock'n'roll, I don't know what is.

Mr Harrington was my English teacher. This selfless wonder of a man gave me a love for all words in all forms: spoken, written, sonnets and songs, the lot! Words became my music; a festival of delights in my mind as I was introduced to Keats, Chaucer, Cooper Clarke, Wilde and more. If it wasn't for Mr Harrington, I doubt I would have ever entered the arts. Gatekeepers are so vital to higher education, confidence and self-belief. Stephen filled my mind and world with endless words and phrases. He could quote poetry, Shakespeare and a universe of apt quotations at the drop of a hat, but what really had my ears pricked with eager anticipation were his insults. I once heard him bellow down the corridor: "You, boy, are the bacteria on the breath of humanity!"

Carole, or 'Miss', was my Drama teacher at St. Aelred's R.C. High School in North West England. 'Drama isn't for me; drama is for girls, ponces or posh people', I thought. Oh my, how I had it all wrong! I was supposed to be continuing a successful career in rugby league, but theatre put a stop to that. Carole, who is still a very close friend, stood up to my father's challenges to me being an actor.  She told him straight (she tells everyone straight) "I think he can really do this". I'll never forget that moment. I'm glad to say my dad's now my biggest supporter. Carole gave me, and numerous other working-class kids, the confidence, self-belief and opportunity to see that the arts is not a ring fenced career for the middle classes, but for everyone - even me. It's all her fault!

'The Gaffers', as I affectionately call them, were a huge part of my life during my first professional job after leaving the Royal Welsh College of Music and Drama. I toured the world with theatre company Cheek by Jowl and their show ‘'Tis Pity She's a Whore' and learned immense amounts from these three artists. Declan’s understanding of human nature is profound – working with him was the first time I went, ‘oh, that’s what genius is’. It’s not just about their work on stage but how they exemplified how to behave and work with people off stage. Their attention to detail in every aspect of the work – and their understanding that it is always about the work – is an inspiration for Not Too Tame. Keep an eye out for Owen Horsley: he will run the theatre world one day, of this I’m certain!

I have few heroes these days but Sarah is certainly one of them. I’ve learned a lot from working with Sarah at Derby Theatre, including ‘you get more with honey, than vinegar’. She invests heavily into everything she does, which I think is why I connected so much with her. She knows what she wants but she allows other artists the space, freedom and support to flourish and show their talent. I’ve watched with sheer amazement how she has inspired and cared for each member of her team and the audiences that she’s worked so hard to engage; from the cleaners to the youth company to the numerous artists that benefit from working with her. She really cares. You can see that in the effort and attention to detail she puts into everything, whether it’s a catch-up meeting, an early hours email, exploration of text, or engaging new audiences. You can’t kid a kidder and anyone who works with Sarah knows she is in this for the right reasons.

My Gurus: ‘it is always about the work’