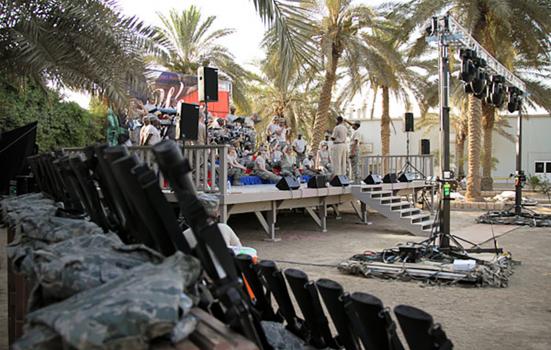 Performing at an undisclosed location

I used to work for the US Air Force, performing for troops in dangerous places with an elite U.S. Air Force unit called Tops In Blue. We were highly trained soldiers performing for soldiers. Or as our Commander put it, ‘family entertaining family’. It just so happened that we were soldiers with performing talents, and in our off time from our day jobs as jet engine mechanics, chow hall cooks, ER nurses and more, we had to compete for a spot on the tour. We were our own tech crew, logistics and everything else.

Whether we were performing in Kuwait, Greenland, Korea or Guantanamo Bay Cuba, we were always required to shake the hands of each and every audience member afterwards. It wasn’t an option, it was a requirement – so much so that it was actually choreographed into the finale of the hundreds of performances we did worldwide each year. Performing under the threat of sniper fire for an audience sitting on tanks or in makeshift tent cities in the middle of the desert fills you with a different kind of responsibility. Your ego shrinks quickly and you’re reminded that you are there for one reason – to serve the audience. For some of these soldiers stationed in harm's way, we were the only entertainment they got all year.

The currency of relationship

The idea of taking that responsibility one step further – shaking each and every hand after the show – really stuck with me. Among the touching and private things troops shared with us, one of the most common was ‘I would have gladly paid more for that’.

Given our current situation, shaking hands is the last thing people want to do, but talking with and listening to the audience remains the most valuable asset we have. I’d argue it is more valuable than cash, because when executed properly it can lead to increased loyalty and revenue. 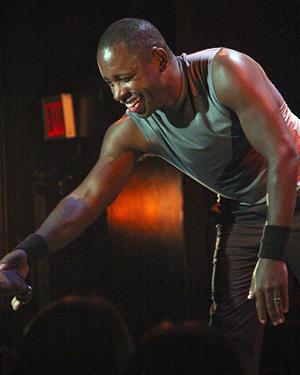 The currency of relationship and attention is often underestimated. The notion that people find more value after the experience than before was something I just couldn’t shake, but I chalked it up to emotion and left it alone for a while.

I kept performing here and there, always shaking hands with audience members and still hearing that same phrase: ‘I would have paid more for that’. Many years later when I wrote a solo show called Basic Training about my experiences performing with this group, I found myself at the Edinburgh Fringe Festival. After selling out two seasons and winning the Fringe First, I still insisted on shaking hands afterwards and the results were the same.

When I wrote the follow up to Basic Training I decided to give it a go. Would people really pay more after a show than before? After all, people say lots of things they don’t mean. But although you can’t possibly implement 100% of any audience feedback, consistency tells a story that’s worth paying attention to.

My analog ‘pass-the-hat’ version made me more money than had I charged $20 per ticket but I had no way of thanking anyone for their contribution by email. After searching online for weeks I could not find any solution that allowed the audience to make a reservation for a small fee, enjoy the experience and then pay when the emotional value is highest - afterwards. So I learned to code and built it myself.

In the summer of 2018 I tested it out and made 82% more income than I made performing my show Off Broadway. It occurred to me that perhaps this isn’t just another ‘kind comment’ that audiences make in passing. They would actually pay more because it is difficult to know the value of something new or unknown until after you’ve seen it.

It also seemed like that post-show opportunity for engagement was a pleasant surprise to audiences, and it cultivated a more authentic relationship. When I talked to performing arts centres about my crazy idea, they immediately responded with requests to try it out because empty seats send the wrong message, and ‘papering the house’ doesn’t provide any useful data. They were also battling with the endless choices of streaming services which made it harder and harder for people to leave their couches. Remember those days?

As theatres around the world validated the idea by writing cheques to ensure my crazy experiment became an enterprise application, they also made more money. An average of 30% more. Our transition to online events was seamless, and between March 2020 and May 2020 the average audiences paid jumped to 50% more.

When live performances return it won’t be floodgates opening to thousands of people eager to pack our venues. It will be about customer confidence and perceived value. Live streaming is here to say, and streaming for free doesn’t scale nor does it provide any data you need to build your most valuable asset – long term audience relationships.

Kahlil Ashanti is an entrepreneur, actor, web developer and CEO of weshowup.io, a pay-what-you-can platform for experiences. Find out more at weshowup.io.