A collective of dance freelancers has initiated a critical response to the fragile nature of their livelihoods. Anna Alvarez and Alister O’Loughlin say they are aiming for long term change. 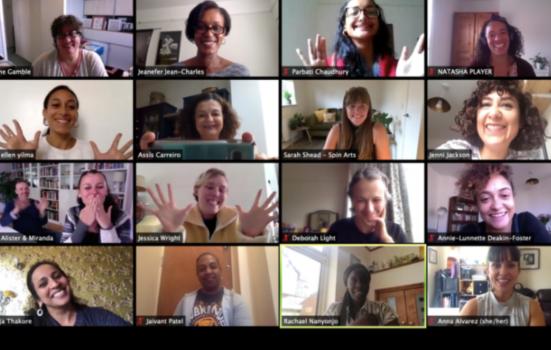 Last summer Fuel – together with over 100 sponsors - initiated a Freelance Task Force (FTF) in response to Covid and its impact on freelancers in the performing arts industry. The FTF was made up of some 160 freelancers drawn from all disciplines.

During the initial 13 weeks, a sub-group - the Dance FTF - was established to champion and highlight issues in dance and movement art forms in particular.

Representing a range of backgrounds, regions and experiences, our common link was being freelancers in dance. We are just two of a very diverse group of people that work in the dance industry.

The aim of the FTF was to provide a critical response to Covid and its immediate effects on freelancers in the performing arts sector. In many of the conversations, there was an implied ‘theatre’ before the word ‘freelancers’ so we thought there was a need to represent dance industry freelancers specifically.

With a view to longer-term change, we wanted to address the inherent fragility, vulnerability and precarity of freelancing. Dance organisations and funders have recognised the importance of our work and offered financial support to continue. They include Arts Council England, People Dancing, Independent Dance, Spin Arts, Pagrav Dance, Sadler’s Wells Theatre, One Dance UK and Cheshire Dance.

It won’t be any surprise to the dance community that the Dance FTF was action-focused from the start and, through the creation of working groups, we were able to harness a plethora of skills and work as conduits for freelance dance artists. The working groups explored specific areas of concern covering adminstation and communication; movement directors; early career artists; pay scales; and anti-racism and inclusivity.

Towards an ideal arts sector

These groups worked on everything from sharing opportunities, jobs and surveys to convening conversations about how to work collaboratively within a creative team. They also provided much-needed networking opportunities and workshops. But perhaps most important strand of work was the research undertaken on pay scales.

Following widespread consultation with more than 400 people, this group looked at the experiences of freelancers, the differences between long- and short-term contracts and hours worked. It found that when preparation time was included, pay rates often fall below the statutory minimum wage. The work has been welcomed by sector organisations but as pay rates can only be recommended by unions, we are in ongoing conversations with Equity to address this.

The anti-racism and inclusivity working group has been collating best practice resources on anti-racist and anti-discriminatory initiatives in the arts sector and identifying the specific needs of Black, Asian, and Ethnic Diverse artists.

A report authored by Annie-Lunnette Deakin-Foster and Natasha Player has been produced encompassing a set of guidelines, principles and ideals. Using the umbrella acronym IDEALLL, it addresses inclusivity, diversity, equity, accessibility and legacy, liberty and love to work towards an ‘idealll’ arts sector.

The 5 Guiding Principles by Alister O’Loughlin & Miranda Henderson resulted from an exercise to discover people’s ‘burning issues’. The most burning was the desire for a ‘fair-trade model’ for freelancers.

Fair Pay: relating not only to better rates of pay, but (recognising that few organisations can simply increase budgets), looking at ways of making pay fairer.

Inclusivity: supporting diversity, with reference to current best practice & language. A continuous process of investigating internal structures and cultures within organisations to ensure that inclusivity is the norm.

Representation: freelancers being involved in decision making processes - borrowing the civil rights motto ‘nothing about us without us’. This isn’t about freelancers as unpaid board members, it’s about a freelance voice in recruitment, programming, and other areas of delivery.

Transparency: in contracting (what is the job? what are the fees?) and data about freelancers (who? how many? doing what?)

Sustainability: environmental sustainability, but specifically acknowledging the lifelong precarity of freelancers. It asks organisations to recognise this and work to support freelancers at all stages of their careers.

The website is currently in development but will be a repository of best-practice exemplars for organisations to adapt and adopt.

At the start of the FTF there was a national spotlight on freelancers. As we live through another winter of restrictions and working from home, we need to maintain awareness of freelancers as the most precarious workers in our sector.

There has been some progress. The most recent application process for Arts Council England referred to freelancers for the first time. This helps to ensure that publicly funded organisations recognise the need to continuously evaluate and improve their ways of working. We have also noticed an increased demand for accountability processes particularly around fair pay and racism in the workplace.

While the work of the sub-groups is ongoing, we encourage more organisations to adopt the 5 General Principles as an accessible and concrete action and place to start. Then the Dance FTF will hand over its work to national dance organisations in Spring 2022.

Anna Alvarez and Alister O’Loughlin are founder members of the Dance FTF.

Anna is a dancer, choreographer and movement director.
Alister is an actor and physical theatre practitioner.