Don't run at it

What is it like to join Arts Council England's National Portfolio? Annie Rigby shares her stories of joy, relief and fatigue following her organisation's first year as an NPO. 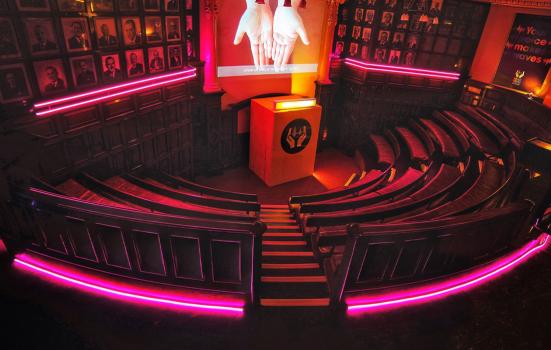 In the lead-up to Unfolding Theatre becoming an Arts Council England National Portfolio Organisation (NPO), I asked lots of different people for advice. I was still asking three months into our first year when Annette Mees, the previous Co-Artistic Director of Coney theatre company, and now at the Royal Opera House, said: “Don’t feel like you have to run at it. We felt we had to do everything in the first year. We created so much pressure for ourselves.” I nodded wisely as if I was taking her advice - but really, I was thinking that we’d done exactly the same thing.

Our first major piece after becoming an NPO was Multiverse Arcade. Created with 52 young people, this is an interactive installation of arcade machines that play videos on your palms, record your voice and ask young people what changes they need to make to save the future.

I’d got so tired of going from project to project, endlessly saying goodbye to the participants, audiences and partners we’d got to know

It was nothing like anything we had ever made before. It brought together young people, co-created writing, performance, software development, filmmaking, design, projection and more. It was amazing and terrifying. And if I had my time again, I would choose a first major piece that was more like something we’d done before.

We’d set a target audience of 4,000 visitors and ended up welcoming over 16,000. The feedback was amazing: there were so many connections to make, stories to tell, people to meet. But I was so busy that I didn’t have time to do half of it, or to make the most of it.

Now we’re at the end of our first year, and it’s time to make our next major show. One of the things that I’d become frustrated by as a project-funded company was the time it took to develop a project. We’d raise money for R&D and then have to wait until we could raise money and build partnerships to develop the full production. And then often wait again to tour it. It makes everything so slow. But there’s a lot of thinking space in those gaps. It's unpaid thinking time - but that can still be welcome, when sometimes it feels like I’ve swapped that for paid no-time-to-think time.

Another thing is that recruitment takes ages. We’d written in our business plan that we would recruit trustees and two associate artists at the beginning of our first year. We started with the trustees, and received far more applications than we were expecting. And it felt like a really important process to get right. So we took our time, and got three brilliant new trustees.

But that meant we didn’t recruit associate artists until the autumn. And we didn’t appoint a production manager for Multiverse Arcade, because the designer and I felt we could cover it between us. And we took on another big summer commission, because it was a really exciting project with great artists. You can see where this is going…

There’s a lot to do. We knew there would be. We looked at all the new things to report on and systems to establish. We’ve benefitted from the generosity of other similar companies, such as GemArts, Open Clasp, New Writing North, FanSHEN and Northern Stage, who have shared spreadsheets, Airtables and CRM tips.

What helped came from the coincidence that I also became a trustee of Seven Stories, the National Centre for Children’s Books. Unfolding Theatre is a Band 1 NPO, so our reporting requirements are light touch compared with bigger organisations like Seven Stories. It might not feel like that - but seeing the reporting demands on a larger NPO helped put things in perspective for me.

This is also the first time I’ve had a secure monthly income since I founded Unfolding Theatre ten years ago. There isn’t a bit on Arts Council England’s annual return to talk about the fundamental difference that has made to me and my family. But it’s space to breathe. It’s the ability to be a mother and a theatre director. It’s the ability to make theatre in the place I feel at home. It’s an enormous privilege.

I also feel the strength of the relationships we’re building. I’d got so tired of going from project to project, endlessly saying goodbye to the participants, audiences and partners we’d got to know. It’s felt really good to be able to establish long-term relationships. We’ve founded a young people’s collective, Right Now People, who we will support to develop their own projects, while they influence our creative thinking. We’ve been able to return to community groups to deepen relationships, and support participants to become volunteers and leaders of their own creative projects. And it’s enabled them to become a part of our creative processes.

So what advice would I pass on? I don’t know quite yet. It feels like we’re a beginner again in the best way, but in a way that sometimes feels harder. It’s an unbelievable opportunity. Don’t run at it.

Don't run at it
A sound investment
One coin, two sides