Cultural entrepreneurship as an antidote

A plan to breathe artistic life into a historic bookshop aims to reverse a pattern of decline in Sunderland. Andrew Leach explains. 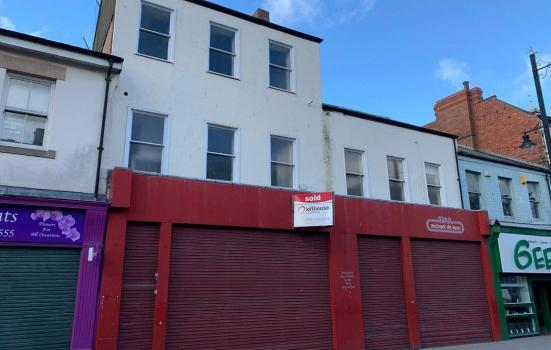 Sunderland city centre, like most of the North East’s cities and towns, is feeling the devastating impact of Covid-19 on the local economy. A city which hadn’t fully recovered from the 2008 financial crash is now facing the mass closure of businesses, with cultural, leisure and hospitality sectors bearing the brunt of it.

Once recognised as an industrial powerhouse, Sunderland was famous for its shipbuilding, glass making and coal mining, until jobs moved overseas and sites were closed down. More recently, Sunderland’s football team were playing in the top division of English football, but now find themselves in England’s third tier. This has had a significant impact on private investment into the city. A decline in belief of the city, both on and off the pitch, has been well documented on Netflix’s docuseries, Sunderland ‘Til I Die, with audiences sharing their feelings of frustration about how Sunderland is falling further behind other big cities when it comes to cultural and economic success.

Amid the gloom however, Vincent Todd, co-director of Marengo Estates Ltd, has set his sights on Sunderland becoming a thriving cultural and creative hub.

Originally opened on Christmas Eve in 1852, Hills Bookshop is considered a cultural institution by avid readers and lovers of arts and crafts. It closed its doors for the last time in 2006 due to the declining high street, but Vincent plans to re-open the building on Christmas Eve 2021, 169 years later, turning Hills Bookshop into a multi-use space.

The building will host a café, crafts shop, counselling rooms, artist studios, exhibition space, and community workshops with disabled access. He wants to create a space for the local community to immerse themselves in art and culture, find a new passion, create experiences, and ultimately play a role in shaping people’s lives for the better. The aim is to breathe new life into this part of the city by providing culturally enriching activities to people of all ages. This will generate higher levels of footfall into the city, which in turn will boost the local economy and provide people with more access to resources.

He says Sunderland enabled him, as an early career cultural facilitator, to accelerate his career and development. Within just three short years, he moved from being a postgraduate student to a company director. Support from the University of Sunderland and the Enterprise Place, which has partially funded the Hills Bookshop project, will play a vital role in guiding the project to fruition.

Among its aims, Marengo Estates Ltd. want to create an environment that will help retain the best talent in the North East and bring an end to the ideology that in order to succeed in the creative industries, people must leave the region and move to big cities.

Vincent and his fellow co-director, Mark Burns Cassell, have experience in operating successful community interest companies, with MBC Arts Wellbeing becoming widely known across the North East for its creative workshops in soapmaking, ceramics, and fused glass. Mark believes arts and culture shape and expand people’s knowledge and experiences, and MBC Arts Wellbeing has unleashed people’s creative talents. The goal is to reproduce this success at Marengo.

The company has partnered with Norfolk Street Arts, a registered community interest company, and will be eligible for grants to support the project and commission creatives. Private income will be generated through renting out studio space and office space to the rear of the building, sales in the arts and crafts shop, and from the independent café. This will contribute towards achieving financial stability and enhancing further community workshops that benefit residents. Budding artists will be able to exhibit their works and talents in the spaces available.

Both Vincent and Mark recognise that reinventing Hills Bookshop ties into a much grander vision for turning Sunderland into a cultural and creative hub. Sunderland City Council has outlined its plans to transform the city into an outward looking, international destination for businesses via creative, technological and green industries by 2030. Councillor Andrew Wood says the repurposed space will “drive that vibrancy” the council is seeking.

Ultimately, the pair hope to create a unique user experience for visitors. In time, Marengo will turn community-led arts and creative programmes into an invaluable facet of the economy in Sunderland and the wider North East region.

Cultural entrepreneurship as an antidote