As technology becomes an increasingly distracting force, it’s down to live entertainment to tempt people to set aside their devices and be present with each other, says Dave Wakeman. 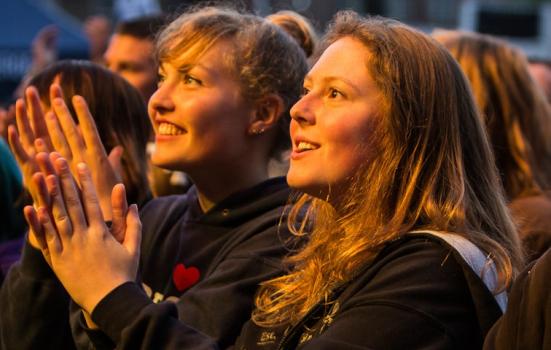 For most of us, attracting attenders and achieving long-term stability are key issues for our organisations. But our culture is now dominated by technology, and options for distraction and entertainment increase daily. That makes the challenge of gaining people’s attention tougher than ever, and the task of filling our venues even more complex.

Thinking and acting with an eye on the future is very important, and to understand the future we must first look at where we are now.

Communities are vital in creating a positive future for us because as humans, we long for connection to others

Fortunately, as the ability to be distracted on our devices has increased, consumers’ desire for experience and real connection has grown. That’s great for cultural organisations, because what we do is built on connection and experience. It is an opportunity we mustn’t miss.

The power of telling stories

The starting point for making the most of this opportunity lies in the stories we tell. For far too long we have allowed the marketing and advertising of our shows and performances to focus too much on the stars, the price, or other things that don’t talk about the ‘experience’.

To win the future, we have to start telling stories. Stories about the way a night at the opera moves us. Stories about how a powerful play makes us view the world in a different way.

We need to tell these stories because a star may give you a short pop while the actor is in the show, but you want the long-term loyalty to be to you, not the star. To do that you need to develop a deeper emotional connection linking your audience with you, your venue and the art.

Stories help us do that. Stories are how we process information and make sense of complex ideas. But most importantly, stories help us create the emotions that will prompt action: cavemen used stories to tell their tribe how to find food or avoid being eaten by saber tooth tigers.

Closer to home, think about the way shows like Hamilton use coverage of its awards, the demand for tickets and its desire to beat touts to sell consumers on the idea that this show is the only show to try and see on their next night at the theatre.

The next step towards winning the future of live entertainment involves creating communities around our venues, our performances and the people who attend our shows.

Think about a band like the Grateful Dead. They were never the hottest band in the world. In fact, over the course of their career, they only sold 35 million albums. But they were exceptionally good at selling concert tickets, selling more than 26 million during their career.

Because they weren’t the hottest or most commercial band, they couldn’t rely on hit singles to sell tickets. Instead, they focused on their fans, building a community of followers called Dead Heads. These fans were so dedicated that they followed them from show to show, building an economy of their very own to support their commitment to the band – selling bootlegs of the band’s shows, tie-dyed t-shirts and edibles.

This community didn’t develop due to infrastructure spending of the band. It grew out of a shared commitment to an idea, art and a feeling of connection to a larger organism, a community.

Communities are vital in creating a positive future for us because as humans, we long for connection to others. The need to connect goes as far back as the very beginnings of man. That’s why there has been a reaction to our dependence on technology, towards live experience. It is only natural. That’s who we are.

Many arts organisations already have structures in place that will allow them to nurture these communities. They have a building, a social media presence, subscribers and customers. The key to building a community is combining all these things intentionally so that you are the organising theme around which it will gather and connect.

That might mean open houses, happy hours, community performances or any number of other activities that feed the physical with virtual chats, groups and videos. All connected to you.

The ultimate ambition of claiming a new future for live entertainment revolves around embracing our humanity. This can be as simple as looking at every touch point as a marketing opportunity to bring people closer to you and your building, your art and your performances.

This means that the customer path you lay out for your audience isn’t a rush to get them to the most expensive tickets or biggest gift, but a lifelong journey that means you are a part of each other’s lives.

Ultimately, the future of live entertainment isn’t about an ad campaign, a hot show or a new star. It is as much about creating opportunities for people to set aside their devices and be present with other people. In a world where we are all distracted, humans can and will win the day.