Covid taught us to care again

The pandemic has put an end to the days when an aloof but brilliant leader could direct operations from behind closed doors. Honesty, empathy and communication are now the hallmarks of effective leadership, writes Chelsea Pettitt. 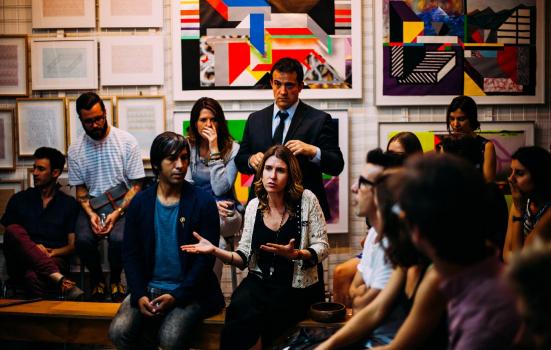 "Let’s look to empower more individuals at all levels by working with honesty, open communication and empathy."

It all started at the tender age of 20, when I was thrust into my first leadership role in retail while at university in Los Angeles. How was someone so young supposed to gain the respect and trust of older, more experienced employees?

My instincts said to work hard, set an example, be honest, and take on the worst parts of the job so that my team didn’t have to. I cleaned up after dirty customers and allowed them to scream in my face rather than my colleagues’. I worked weekends and Christmas so those with families could go home. This worked, but it also led to the first of many comments from senior management that I was “too honest” and “too friendly” with my team. This shocked me at the time, but years later, I learned the UK arts sector was no different.

Art world leaders have looked more or less the same in the last few decades - clever, mostly white, usually male creatives given director roles across the country and internationally. They give great speeches, curate blockbuster exhibitions, walk in the ‘right circles’ and generally work the system which has favoured them for so long. When I came to the UK in the early 2000s, the status quo was ticking along, and hierarchies were being maintained. Many leaders at the time were aloof, with separate offices left empty as they travelled the world. In-house teams could rarely get a meeting with them, and junior employees delivered the detail of projects for which the ‘leader’ claimed the glory.

I should add two caveats here: not all managers were like this, and there will be many examples where this was not the case. Secondly, this applies not only to the arts sector – many retail and hospitality managers sit in back room offices while frontline and front-of-house teams deal with the demanding public.

Many industries suffered from a belief that once you paid your dues, you could eventually be one of those senior managers who get to ‘delegate’ and escape the pressure of the floor. But the arts were somewhat different: we also felt we had to possess innate charisma, extensive qualifications, and the right social and professional circles to succeed. These qualities that have been dictated to us for decades are undoubtedly suited to those from a certain background. “Those who don’t have them can’t be leaders of arts organisations,” we told ourselves.

With the #MeToo and Black Lives Matter movements gaining international traction in recent years, many influential individuals in the international art sector were called out for inappropriate behaviour: bullying, sexual harassment and racism. Ultimately, the status quo remained, and business stayed the same. But once the fragile hierarchies were laid out for all to see, with primarily Black, Asian, and other ethnic minorities bearing the brunt of furloughs and redundancies in 2020, questions were raised about leadership in the arts sector. The pandemic changed our idea of what good leadership is.

Staff who did not feel as if they were part of a team, who were kept in the dark about organisational practice and expected to deliver rather than collaborate, felt betrayed and angry. Had leaders communicated with humility, transparency and honesty for the past few years – if they had truly empowered others rather than their own agendas – the conversation around an ailing arts organisation could have been very different.

2020 exposed the weakness of this outdated idea of a leader. Abilities we once prized – oratory, curation and networking – can be learned. And yet, none of them matter if you do not work with your team with integrity and trust. Teams will support the ethos of the organisation if they believe leaders will put their interests, not those of boards or the bottom line, first. Crises force hard decisions that leave people feeling betrayed; leaders sadly have no way to escape this. But displaying your core values plays a crucial role in navigating a crisis with your colleagues.

So, what now? It has been nice to see recent director job descriptions be more explicit in embracing other ideas and visions of leadership and an eagerness to bring in a diversity of voices and backgrounds. Only time will tell if this really translates into new leaders for the sector. Books, training and talks about leadership often say it starts from within; you must know yourself first. Of course, I thought I knew myself. I read books and listened to podcasts about women in leadership and emulated what I saw from 20+ years of different managers. But if 2020 taught us anything, it is that leaders are constantly changing and learning how to lead. One never really knows themselves – especially when everything they know is thrown into chaos.

I had to rethink what my role was in order to lead people through this challenging time. I had to go back to the instincts I was previously taught to suppress – to communicate, to be honest and show empathy, to give more, not less. Rather than doubling down on our previous ideals of senior management, now is the time to get creative in thinking about new, collective ways of working. Leaders of the future arts sector will be from all walks of life and will bring fresh ideas to what hierarchy means, perhaps embracing styles of lateral leadership.

As we head into 2021, let’s work more in partnership to find mutual and equitable objectives across teams. Let’s share good practice from artist-led organisations and community-led initiatives and facilitate training in lateral leadership. Let’s look to empower more individuals at all levels by working with honesty, open communication and empathy. This way, we can create space for new, successful leaders resulting in a much more collaborative arts sector. As Martin Luther King Jr. said: “We may have all come on different ships, but we’re all in the same boat now”.

Chelsea Pettitt is Head of Arts at Bagri Foundation.

Covid taught us to care again