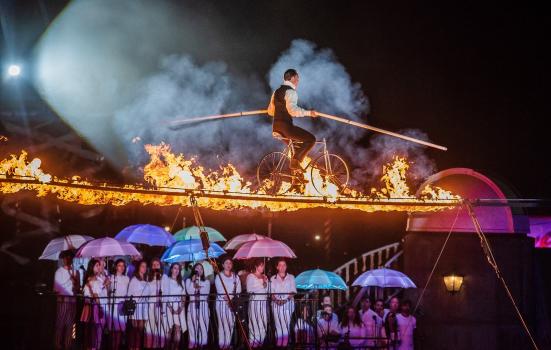 Modern circus as it is known today can be traced back to 1768, when trick rider Philip Astley discovered that when his horse galloped in a circle, the centrifugal and centripetal forces allowed him to balance on its back. He bought some land at the foot of Westminster Bridge, built a ring, hired a clown, and invited audiences to watch.

Circus has always had its finger on the pulse and been quick to react to the cultural climate. In an era before access to instant news and pictures via TV or social media, circuses would often be telling the stories first. In 1854 Astley’s circus re-enacted scenes from the Crimean War for audiences.

When TVs entered American and European homes, circus began to decline. Recessions and depressions also had an impact. When large, tented shows became economically unviable in the 1980s and 90s, many artists developed outdoor work without the need for a roof. They turned disadvantage into opportunity and today, the outdoor arts sector is an important part of the UK cultural scene, drawing an audience that is often younger and more diverse than venue-based performance. It has become the art form that launches city festivals and opening ceremonies – circus has been integrated into anything that needs spectacle.

This year has been difficult for everyone, circus included. Cirque du Soleil filed for bankruptcy in June, cutting 3,500 jobs. With a summer of cancelled shows, festivals and events, thousands of freelance artists in the UK have suddenly found themselves without any form of income.

At Cirque Bijou, the year got off to a promising start with a month of shows at Taichung Lantern Festival in Taiwan, but we have had no live performances since. We, like many other organisations, have instead refocused on supporting freelance artists with funding advice, training, coaching and mentoring. Without work, many have had to leave the industry. It is our hope that when things pick up again, they will be back – and that companies like Cirque Bijou will be here to employ them.

Some of the enduring strengths of circus are its sense of community, self-reliance and adaptability. We are a small industry who work closely together. Traditionally, circuses were family outfits – marriages brought circuses together, divorces split them apart. But even if nowadays we aren’t all related, we remain a resilient community of entrepreneurs, held together by the circus’s strong sense of identity. Circus has always formed strong connections with the communities it performs to and today this sense of connection is perhaps more important than ever.

We are optimistic about the future because circus is flexible; it can happen in many different ways and different kinds of spaces. Big tops will continue to be important, as will work in theatres and outdoors. We continue to look forwards, creating work, nurturing partnerships, and experimenting with new ideas. In September we produced a short video illustrating how participatory performance can happen outdoors in a Covid-compliant manner.

It seems that tented and outdoor work will be the first to return. With this in mind, we and our partner, Diverse City, are going back to our roots and investing in a big top, with the support of ACE’s Cultural Recovery Fund. In this way we can create a Covid-safe performance space for our artists, audiences, and communities. This will house, among other shows, our reimagined Extraordinary Bodies show ‘What am I Worth?’, which will include new digital elements.

Across the centuries, circus has managed to keep the essence of its art form while reinventing itself to suit the zeitgeist. While performing elephants, freak shows, and circus parades have mostly been consigned to history, circus itself has remained a constant. The risk, the danger, the suspense, and the extraordinary spectacle: these have all remained. Ultimately, audiences will always have a desire to gather, to celebrate, to share moments together. This is what circus does best.