A hundred years after (some) women got the vote, they are still under-represented in creative and management positions in the arts. Theatre company Spare Tyre champions women, and Lynette Shanbury calls on everyone to do the same. 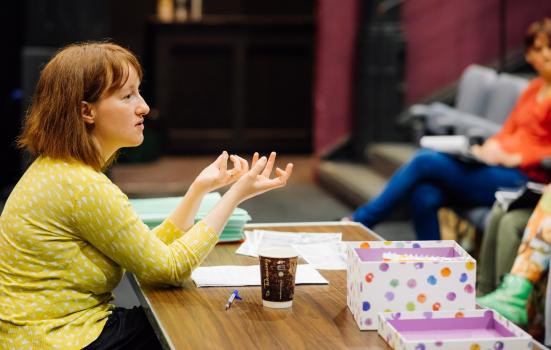 Spare Tyre has been championing women since we began as part of the alternative feminist theatre movement of the 1970s. The work was funny, uplifting, cutting and unapologetic. Since then, who we work with has expanded, reflecting wider social movements, such as older people and people with learning disabilities, but women have always been fundamental to shaping our work, even if on the surface that might not be overtly obvious.

As a society we are conditioned to envision a particular embodiment of power, and it is male in form

We are proud to be a female-led company. Our artistic director/CEO, Executive Director and Chair of Trustees are all women, leading a diverse team of core and freelance staff. Equality of opportunity is a human right that runs through the fabric of the company’s mission.

Employment issues in the arts such as inflexible and unsociable hours, gender discrimination, and the general expectations of overwhelming work levels, make working in the arts a challenge for many women. And yet it is a sector that attracts many of them to the workforce.

The 2016/17 National Portfolio Organisation (NPO) survey by Arts Council England reveals that women outnumber men in the workforce as a whole (46% female and 39% male), and also fill more managerial roles. In fact, 2016/17 was the first year that there were more women in chief executive roles than men.

This sounds like good news, but women were still significantly outnumbered in the key roles of artistic director and chair of trustees. If you delve a bit deeper, dissecting this data by size of organisation, you discover where the power across the sector still really lies.

What all this means is that the huge strength of artistic power that is held by these major organisations is still firmly controlled by male gatekeepers.

So why, when women outnumber men in the overall workforce, are we seeing this significant lack of female representation at the top? If we want to see more women in charge, we are going to have to reframe our view of what a leader looks like. As a society we are conditioned to envision a particular embodiment of power, and it is male in form. Male leaders, male-defined work structures, male historical visions of success.

I’ve never been particularly interested in working in the really big organisations – perhaps because I thought I’d never be more than a cog in a big machine, unable to grasp any power. By not attempting to challenge this, am I essentially self-selectively reinforcing men’s position as the gatekeepers of our industry, with the power, the resources and the ears of government? What would it take for me to want to lead those organisations?

We have to create a mindset within our organisations that enhances and supports personal, and therefore professional, growth. Rather than asking women to adapt to the historical structures of our industry, we need to rethink our cultural workplace so it is fashioned around them. It is clearly working in smaller organisations, so what’s stopping it from working within larger organisations?

As an organisation, Spare Tyre actively seeks chaos and risk. The traditional structures of professional work are there to be used but not to control the work we create. If something isn’t working we try to change it, and we aim to support people as individuals, not as their roles.

We create an environment which we believe is conducive to open and flexible working, nurturing and building skills and confidence over the long term. This is applied across the organisation’s work, encompassing all our ‘Spare Tyre family’ (artists, participants, managers, trainees). It is done through both formal and informal structures – flexible working as standard, treasuring informal communication channels, retaining minimal hierarchy, and valuing ongoing mentoring.

We put the ethos of progression and development at the heart of our values, and give people the opportunities to take creative risks over a long period of time. That not only supports managers and creatives who are women, but those from other backgrounds, particularly those less economically advantaged.

I genuinely believe we are on the right track, and that the arts are well placed to take a lead role on this within wider society. The discussions that are happening around the gender pay gap, challenging abuse, and how different ways of working can support women in the workplace are all helping to slowly build new structures that work for women. This year’s centenary of (some) women getting the vote is a useful focal point, but it is just one moment in a long and ongoing struggle for social equality.

For Spare Tyre this is an important year for women – just like every other year. In February our Invisible Women festival showcased a female-led, older company of artists who created a production around the moral complexities of assisted dying, a woman of colour reading excerpts from her new novel set in post-Brexit Britain, and a BAME female choreographer/dancer exploring women’s identity.

Although this focus on women was timely in the current climate, it was not unusual within our work. The work was complex and diverse, not necessarily focusing on women’s issues as such but a focus on women as storytellers and creators.

Within the arts, the proliferation we have seen in the last ten months of programming ‘special’ seasons of creative work by and for women can be seen as a kneejerk response to our own industry-specific scandals and the wider #MeToo and #TimesUp movements. But the question is now how will that become ‘un-special’.

How do we normalise this kind of programming, so it no longer needs to be framed as a marginalised creative voice? It is a challenge Spare Tyre has been addressing for 40 years and will continue to tackle. Instant cures don’t work ­– long-term slogging is required. Championing women is for life, not just for this year.