Being at home in Manchester

A group of artists from Deaf, disabled and neurodiverse communities have been working on a project to transform accessibility. Nickie Miles-Wildin reports on its successes. 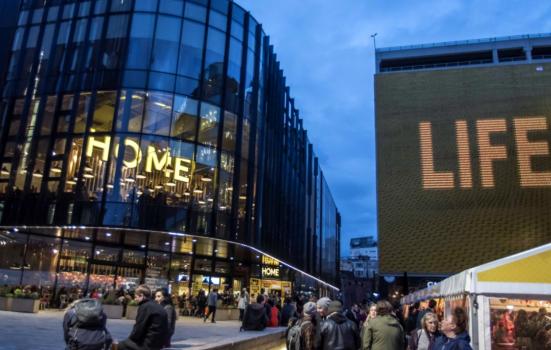 HOME Is Where The Art Is began as an idea about how HOME, Manchester’s centre for contemporary theatre, film, art and music, could engage more Deaf, disabled and neurodivergent artists as audience members as well as future creatives.

Artists from across these communities were invited to immerse themselves in HOME's programme and creative outputs, while also considering what HOME should or could be doing over the next 25 years.

Starting in 2019, as part of Future Arts Centres’ lottery funded Here and Now project, it was inevitably delayed by the pandemic. But in September 2020 after a callout for artists, we got going with regular discussion sessions via Zoom. Aware that five artists who had never met were suddenly thrown together in a virtual environment, I was keen to make the sessions as fun and creative as possible.

Working with co-facilitator Maddy Costa, we ensured that it was a safe space - including the guarantee that everything discussed among the group remained among the group. We were apprehensive at first of being online, not in a quiet space at the arts centre. But actually, speaking to each other from our own homes brought us all closer much quicker. It allowed us to eat dinner, look after pets, and manage pain all while we chatted.

Our virtual meeting room soon began to feel like a truly accessible space. Of course, it wasn’t for everyone and Zoom fatigue meant a few artists decided to step away, but all were keen to re-join when we reassembled in person.

Unable to watch live work, we focused exclusively on the HOMEmakers programme, designed to be created and performed at home (as opposed to HOME) for an audience who were also at home. At each session we chose what we would watch in preparation for the next. The first two were polite, analytical and felt slightly novel.

But as the group began to develop, guards went down and more honest, open opinions were shared. What someone hated, another person loved. Our artist panellists began feeding into the accessibility of the work.

“Could the captions be integrated more?”
“Why was there limited audio description?”
“Don’t forget to add the flashing images warning to this one.”

All comments were fed back to HOME, enlightening them on how access should be included from point of creation, rather than as an afterthought. These discussions also fed into the panellists’ own creative practice.

Earlier this year we managed our first in-person meeting to watch Midsummer Night’s Dream at HOMEground – HOME’s temporary outdoor space. Not all our artists/panellists were able to attend as some were shielding and others were understandably still anxious about gathering.

For those who did, there were many WhatsApp messages sent before we managed to find one another - after ten months on Zoom it’s hard to recognise yourself let alone other people! Artists brought +1s and we had tables next to one another. It felt like a momentous occasion for us all, being together, meeting in person for the first time and watching LIVE theatre. At the interval and after the curtain call, we started to critique the play as we had done online. And of course, we fed back to HOME on the access concerns of the outdoor venue such as the position of the portaloo.

What have we achieved?

Sadly, Home Is Where The Art Is comes to an end soon. I’ve met a diverse range of artists – from cabaret and spoken word to sound designer, writer and circus performer. I’ve expanded my ability to articulate what I think about a piece of work, and to listen and absorb how other people view art.

Practices have been shared, songs inspired by the group and the art we have been have been composed, and an EP is being released. Blogs, poems and short films have been made. Collaborations have started. And the artists are working on a piece about their time with the project around the theme of ‘What Cultivates Inspiration’.

Most importantly, HOME now has a relationship with a range of artists who can cast a friendly but critical eye on how accessibility needs to be embedded creatively into all programming. With access improving, everyone now feels more welcome in the building. This conversation will continue: these artists won’t allow it to be dropped.

Diverse communities play an important part in the role of venues, and in the arts as a whole. I encourage you to find a creative way to engage with them. If HOME had merely asked for this group to help them tick certain boxes about accessibility, the project would have been short-lived.

Investment in these artists, critics and audiences - particularly at a time when we were shielding and had not left our own homes for months - allowed for honest, open conversation. They feel valued and welcome, and that HOME is a place for them as both as an audience and as artists.

Being at home in Manchester