As cultural organisations are looking for new ways to reduce their carbon emissions, Kate Harvey reports on a remarkable 10 year journey which has led to excess energy generation being redirected to the National Grid. 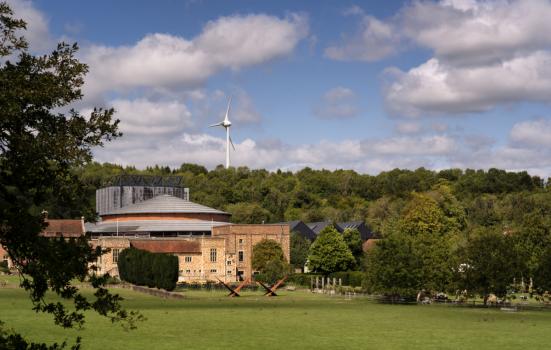 Besides world-class opera, Glyndebourne is perhaps most famous for its beautiful setting, a feature that sets it apart from other international opera houses, more often located in cities. Situated in the heart of the South Downs, an area of outstanding natural beauty, Glyndebourne’s location provides an inspirational backdrop for artists and audiences alike.

For the company, the beauty of our work environment instils a sense of responsibility to minimise our negative impact on the environment. For more than a decade, Glyndebourne has been working towards an ambitious long-term goal of becoming carbon neutral in its direct operations. We recently signed up to the SME Climate Commitment to halve CO2 emissions by 2030 and achieve net zero by 2050.

This has meant looking at every aspect of our operations to identify opportunities to reduce our consumption of energy, water and consumables; work that has been spearheaded by our Environmental Champions, a volunteer group of staff drawn from across the company. Topics raised and acted on by that group include the development of electric car charging facilities, a switch to sustainable cleaning supplies and a ban on unrecyclable takeaway coffee cups.

To encourage all staff to play their part, a ‘green purchasing clause’ was added to Glyndebourne’s purchasing policy to put environmental impact alongside price when choosing a supplier, whether for stationery or stage sets. One recent example of that clause in action: when the lighting department decided to upgrade part of its rig last winter, energy efficiency was among its top priorities.

This ethos also extends to capital projects. In 2019 we opened a production hub building that meets the BREEAM excellent standard for sustainability and, later this year, work begins on a new event space that will be built following closed-loop principles. The building’s materials, many of which are normally described as waste, will be sourced from the site or the immediate area. These include wood from trees felled due to ash dieback, food waste such as oyster and lobster shells, and corks.

One of Glyndebourne’s earliest and most eye-catching projects launched in 2012 when, after a five-year planning process, Sir David Attenborough cut the ribbon on a state-of-the-art Enercon wind turbine, designed by Norman Foster.

The turbine sits a short distance from Glyndebourne, on an area called Mill Plain the remains of an 18th century post mill still stands. The owners of that windmill chose their location well and, as we approach the ten-year anniversary of its launch, the Glyndebourne wind turbine has just produced its highest ever yield. During 2020, it generated 1,820 megawatt-hours (MWh) of electricity with an average annual wind speed of 6.4 metres per second (m/s) beating the previous record set in 2015 of 1,769 MWh with an average wind speed of 6.5 m/s.

Electricity consumption was significantly reduced last year due to the impact of lockdown, leading to the cancellation of the 2020 Festival. As ever, excess energy from the turbine was sent to the National Grid to provide a green source of energy for the local community.

While 2020 marked a record output, the turbine has consistently exceeded its target to generate the equivalent of 90% of Glyndebourne’s annual electricity requirements, helped by a drive to reduce electricity consumption through measures such as modification of the air conditioning system and the installation of timers and light sensors. Between 2012 and 2020 the turbine has produced the equivalent of 105% of the electricity used by the company in that period, resulting in a 50% reduction in carbon emissions.

Costing £1 million, the turbine was a substantial investment and was funded through reserves built up over 20 years to ensure the charity’s long-term sustainability. The project was informed by an analysis of the organisation’s own-generated carbon emissions, which revealed that it was the single largest financially viable initiative that could then be undertaken to reduce our emissions and, by outperforming expectations, the investment was recouped in less than six years.

But while projects such as the turbine require considerable financial outlay and a careful assessment of the likely return, significant improvements can be achieved without great expense.

The second biggest annual reduction in Glyndebourne’s carbon emissions was achieved in 2018 when the organisation became zero-waste-to-landfill, thanks to a new waste management contract with Paper Round. The investment was in identifying the right partner and adapting our working practices. Now, Glyndebourne and its onsite catering provider operate under a single waste management contract enabling a full waste and recycling strategy to achieve greater environmental impact.

Tips to improve your sustainability

For other arts organisations wishing to become more sustainable, our tips would be to engage staff to ensure that their specialist knowledge is used to support your efforts; measure key elements of your environmental footprint to get a clear picture of where you can improve and to see the impact of the changes you make; look for small, easy wins alongside big initiatives; and talk to suppliers and partners about how they can help you to achieve your goals. Finally, take advantage of the support available from Julie's Bicycle and via resources such as the Theatre Green Book, led by Theatres Trust, which Glyndebourne is supporting to produce industry guidelines for environmentally responsible theatre.

Kate Harvey is Glyndebourne Senior Press Manager and a member of the company’s Environmental Champions Group.