'New artists' don't have to be young

The arts sector must do more to include older people, not only as consumers but also as creators of culture, says Stella Duffy. 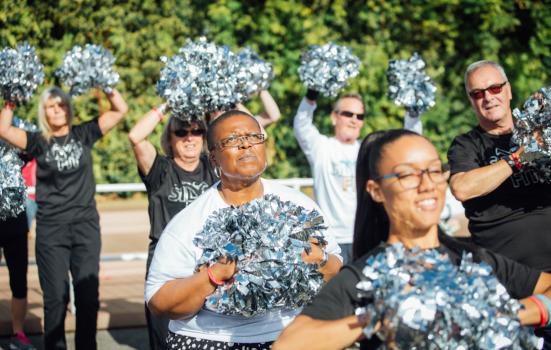 Cheerleaders from the charity Silverfit at a Fun Palace at Brockwell Lido in London.
Photo:

Raised in a working-class family from a south London council estate and later in a small timber town in Aotearoa/New Zealand, I have lived the difficulties that result from little or no access to the arts as a child. Working in and staying in the arts sector has been hard. While my own experience assures me that all children and young people need access to arts, it is also clear that our sector must do more to include older people, not merely as consumers of culture but also as cultural creators.

There are great organisations doing this work, sometimes with a specific focus on older people: Entelechy Arts, Highland Print Studio and Spare Tyre are some of the many cited in the Baring Foundation’s recent report On Diversity and Creative Aging. Others working in community-led creativity - like my own organisation, Fun Palaces - ensure that older people are automatically part of our work because our brief is to include anyone, always. In Fun Palaces 2019, 15% of all Maker teams (those that led Fun Palaces in their local community) included both people under 18 and those over 65. When we support communities to create by and for themselves, intergenerational work happens naturally, creating value for all ages. Similarly, 64 Million Artists report that participation by over-65s in The January Challenge is consistently around 18%. The Office for National Statistics predicts that a quarter of the UK’s population will be over 65 by 2050. This rapidly growing group needs support to continue contributing to our society and the arts sector is well-placed to lead on this.

Partly, this is a societal problem. Youth is considered vibrant, promising, offering hope; old age is not only seen as the opposite, but also perceived as less photogenic. This is an important point: our sector is optics-obsessed. In a society that does not want to see old people, it is all too easy to deny old people. This becomes an arts-specific problem when we see that much of the sector has a misplaced trust in the arts as a meritocracy, believing ‘talent’ will shine out in youth regardless of privilege. Orian Brook, Dave O’Brien and Mark Taylor’s Culture is Bad for You, out in July, exposes this myth and many others (including the one about the golden age of arts funding). I won’t pre-empt their revelations here, other than to say that a meritocracy relies on everyone having the same support to engage from the beginning. This is not the case in the arts now, and it never has been.

We can do better

We could start by scrapping all age-related ‘new artist’ schemes. For the sake of a more vibrant and diverse arts we must work to include all those currently excluded, of any age. To make real impact ‘new’ must mean new – not just young. The 76-year-old who has never yet had a chance to express themselves as an artist has as much right to be supported to do so as the 16-year-old in the same position.

And we can stop pretending there was a ‘golden age’ in arts funding that benefitted those now in their sixties and seventies. The main beneficiaries of this supposed golden age were simply the usual suspects – white, middle class, able-bodied. They run our arts sector now and so far have not been very successful at letting everyone else in.

We must also acknowledge the swathe of older people – people of colour, working class, disabled, LGBTQ – who were not welcomed into the arts in their youth, who were led to believe that arts were for other people, who were denied access to the sector as potential artists themselves. We must ensure our work involves them on every level, particularly as thinkers and as leaders.

And when we discuss arts education we can acknowledge and campaign for lifelong learning, rather than focusing only on school-age children and young people. If we make creativity and participation accessible for older people now, and if our work supports older people to create as they choose to create, then we have a way to keep our aging population engaged, learning and contributing to society. In doing so, those who in their youth were denied the opportunities that their more privileged peers were gifted will finally have access to 'artisting' (François Matarasso’s term is particularly useful here and, not coincidentally, comes from his work Winter Fires: Arts and agency in old age).

Welcoming those who were previously excluded into the arts sector will create better arts simply because including more people allows for wider thinking, more ability and greater possibility. We can do all this, and in doing so better support our young people by defusing the ticking time bomb of a lonely, disaffected, aging population – a burden that will fall on the very 16-year-olds our youth-focused arts sector purports to support.

Stella Duffy is an award-winning novelist, short story writer and theatremaker, and Co-founder and Co-director of Fun Palaces.

'New artists' don't have to be young