A project run by the Royal Exchange Theatre in Manchester and a housing provider started with cultural visits and ended with a full-scale theatre production. Inga Hirst tells the story. 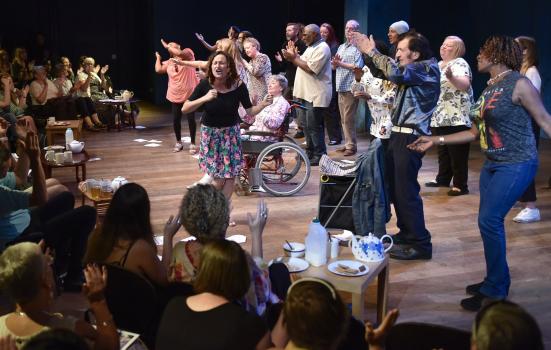 In 2015 the Royal Exchange Theatre and One Manchester, a housing provider in the city, came together to develop a new three-year programme called On top of the World (OTOTW). Four tower blocks in the areas of Hulme and Gorton were identified for the project, which was designed to target single-occupancy residents living in high-rise accommodation.

The tower blocks were among the top 5% most deprived neighbourhoods nationally (according to the 2010 Indices of Multiple Deprivation), together housing 276 people. 98% of residents live alone, and many have complex social needs.

OTOTW was designed to tackle isolation and loneliness using cultural engagement and creative and participatory arts. Its central focus was on training and developing skills to support residents in becoming more active in the community, thus improving their social networks, health and wellbeing.

The first year of OTOTW laid the foundations: developing relationships between the project leads, residents, caretakers and housing officers, and building partnerships with key agencies and community partners. The activities focused on introducing the residents to new cultural experiences and encouraging them to work alongside each other. Initial projects included Christmas carol celebrations, a spring garden planting event and regular cultural trips to theatres and venues across the city.

It became apparent that for OTOTW to have maximum success, a continued presence in each of the blocks would be required. One Manchester identified spaces within each site to house drop-in arts sessions. This approach enabled some of the most vulnerable and isolated residents to connect to others and gain valuable support.

The importance of a communal space has been one of the key learnings from the project and One Manchester is ensuring that this kind of facility is now included in all of its blocks. The drop-in sessions are continuing and are now managed from within the community, thanks to the training of 12 residents as cultural ambassadors. This ensures that a vital part of the project is sustained.

Project manager Tracie Daly says: “It feels like we’ve built a solid foundation – the result of our approach is paying off and residents are now taking hold of the project and flying.” One female resident commented: “I used to be sat at home all day doing nothing - now I can’t believe how busy I am with drama, trips to the theatre, and I’ve got to know loads of people too.”

In the first year of the project, 163 residents participated at least once, with 37 taking part in regular weekly activity across the four blocks. In the second year, the focus moved to developing artistic content and ambition. 12 of the core group began to develop their confidence, communication and social skills through acting and drama workshops. Another group worked with tower-block resident and writer Tina Cribbin on creative writing and traditional storytelling techniques. This initial drama project would eventually led to the performance ‘Can you hear me from up here’.

The group began working on the drama project in July 2017 as a response to the Grenfell disaster, giving residents a voice and a platform to share their experience of high-rise living. The project was developed into a radio play and became a fully realised theatre production performed at the Royal Exchange Theatre in July this year. The radio play has been shared with One Manchester staff and the play was performed at the housing provider’s head offices so that employees could better understand the lived experience of their customers.

Dave Power, Group Chief Executive of One Manchester, said: “Isolation and a lack of belonging can have a huge impact on people living in our communities. The wellbeing of our residents is hugely important to us and we wanted to do something different that will really have an effect on people’s lives.

“This performance gives our residents a voice and an opportunity to express themselves. Not only is it incredibly brave of them to put themselves in the spotlight and discuss matters close to their heart, but it allows us to digest everything our residents are saying.”

As the umbrella project OTOTW draws to a close, both the Royal Exchange and One Manchester can see the impact this programme of work has had on the residents. It has significantly improved their immediate connections to the surrounding community and resources.

Engaging in regular activity has helped residents establish a routine and given many a new sense of purpose. Participants have reported feeling less lonely, friendships have developed and there has been an increase in neighbourliness. One tenant said, “I love being part of this. I feel like somebody again, not a nobody.”