Preston’s Harris Museum and Art Gallery needs ‘re-imagining’ and who better to do it than the young people who will be its visitors in the years to come, says Matthew Wilde. 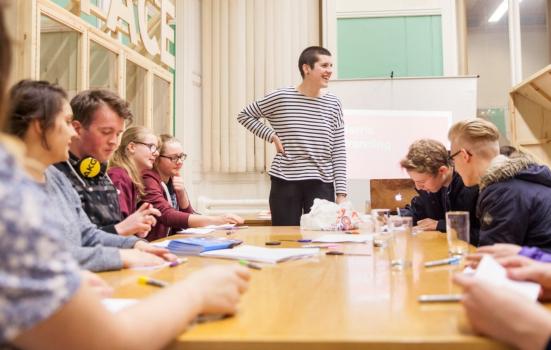 The Harris Museum, Art Gallery and Library has been working with Blaze for five years, since we delivered a youth-led festival at a London 2012 closing event in the north west of England. Five young leaders emerged from that project, all passionate about continuing our work.

The Harris, with Lancashire County Council, supported us by providing an office space and funding a project manager position, and a further series of projects were delivered between 2013 and 2016. Now we are supported by Curious Minds, an organisation based in the north-west of England dedicated to increasing access to arts and culture for children and young people, but the relationship with the Harris continues.

In September 2015 I met Jon Finch, Lancashire County Council and Preston City Council's project leader for ‘Re-Imagining The Harris’. I was full of apprehension, based on hearsay that he was brought in to whip the Harris into shape, but our values aligned and it was clear that he was fully committed to young people playing a key role in the project.

He set me the task of making it happen and the first thing I did was apply for grant funding from the Heritage Lottery Fund (HLF) for a project called Harris Transformers.

Harris Transformers has been shaped by my own experiences as a Blaze participant. I had seen for myself what can be achieved by giving young people complete autonomy over a project, including the strategic direction, marketing, budgeting, interviewing and commissioning professional artists. This led me to find a group of young people who were keen to work in a similar way.

The result has been a group of creative and ambitious young people aged 16 to 25 from across Lancashire, who get together for weekly sessions led by youth facilitator Hannah Whitlow. Over the course of six months they have collaborated with professionals from Wayne Hemingway Design and Purcell Architects, as well as historians, curators and archivists.

A guide to the Harris has emerged in the form of a Zine that reflects the young people’s conversations with these professionals, their research and development from visiting other museums, and their ambitions for the Harris.

Part of the Zine is interactive, enabling the Harris Transformers to consult with others about the building. Their thoughts have contributed to a capital grant application to HLF: a successful application would see the Harris being re-developed and the young people’s ambitions coming true.

A building for the next generation

If an historic building in the heart of Preston is going to be re-imagined and relevant in a hundred years, the next generation are in the best position to ensure its relevance in the future. Throughout the process my obsession was that this project had to be representative of the communities who live in Preston.

To get young people interested and involved in the project, we used many different promotional avenues such as social media, blog posts, press releases, Survey Monkey and more. As a result, a diverse group of young people emerged, some of whom have never been to museums, libraries or galleries before.

Two of the main reasons that the project has been a success are Jon Finch’s commitment to embedding young people in the future of the Harris, and the fact that Hannah and I are young people ourselves. This helps us understand the group’s needs and ambitions and a collaborative respect has developed among us all because we are on the same level.

Some people would call this ‘peer-to-peer learning’. I call it amplifying young people’s voices. Young people are being given an opportunity to genuinely shape something and collaborate with professionals on an equal level. We believe that all young people have a voice, and Blaze’s role is to simply make it heard by using the arts as the medium.

This is what has made this project a success and has retained the interest of 30 young people attending Harris Transformers every week. I urge other professionals to find a similar level of commitment to ensure that their work is sustainable and relevant for the next generation.