Part of the place

An In Harmony programme has embedded Royal Liverpool Philharmonic in its local community. Susanne Burns reveals how the orchestra helps shape Everton’s sense of place. 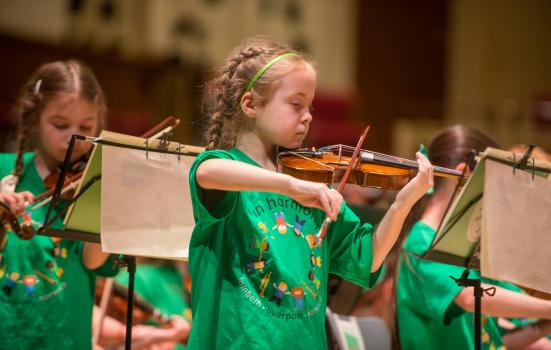 The value of an orchestra to the city whose name it carries is economic, cultural and social. Because of the orchestra’s iconic value and status within a city, like a university or a football club, they play an important role in civic life and politics, with the potential to contribute to the shaping of society and place.

The Royal Liverpool Philharmonic has been a part of the Everton community since 2008. It initially established its rehearsal and education centre there and went on to establish In Harmony Liverpool, an immersive musical programme to improve the health, education and aspirations of children and young people in Everton, one of the most deprived areas in England.

From working with 84 children in 2009, In Harmony Liverpool now reaches 720 children up to age 18 and their families, all taking part in orchestral music-making every week, free of charge, in and out of school.

A longitudinal programme of evaluation and research has tracked its positive impact on children, their families and the wider community. Two recent reports show it is proving to be an exemplar of how an organisation with international status can and should have real and positive impacts in its own city and community.

The impact on children has been evidenced in increased wellbeing and resilience, enhanced aspiration, confidence and motivation, resulting in and contributing to improved academic attainment and musical achievement, enjoyment and progress.

This alone would be enough to shout about, but it is the impact that this appears to have had on families and the wider community that could be seen to have the most long-term significance. As the children became more engaged and more determined, individual aspiration and community pride became evident, creating what could be called a virtuous cycle of change.

The establishment of two orchestras that bear the community’s name, Everton Children’s Orchestra and Everton Youth Philharmonic, has generated a sense of pride and achievement after years of low self-esteem. Both ensembles are central to community events in Everton, performing in schools, nurseries, churches and festivals with concerts always well attended by families and community representatives.

After seven years, In Harmony Liverpool is seen as a community-owned, and increasingly a community-driven programme that has grown and evolved organically. The children’s involvement in high-profile concerts at Liverpool Philharmonic Hall, BBC Proms and others has increased civic pride and support for the programme. From being ‘not for us’, Liverpool Philharmonic is now our orchestra, and the musicians feel it is “the best thing we have ever done”.

One parent said: “No one can say that their son or daughter can’t play an instrument now and that opens up life to them.”

So, how has this happened and what can we learn from it about how cultural institutions might generate operational capacities that support this process? As Michael Eakin, Liverpool Philharmonic’s Chief Executive, states: “The evidence of the success of a programme like this can only be seen over a generational period – you can’t just go in, do a couple of years and get out again.”

This long-term commitment is of major significance as it has allowed trust to be built. Liverpool Philharmonic is there in Everton and is not going anywhere. Partnership-working has placed professional musicians at the heart of the community generating long-term relationships, joint-working across professional disciplines, friendships and trust, providing role models and progression pathways.

Through music we can see that interventions in the early years supports children’s overall development. This in turn impacts on their families, the wider community and place, and this changes the institutions that serve those communities.

The leadership of the programme has required the orchestra to play a role that has cut across traditional organisational and professional boundaries, forging new relationships and creating fresh approaches. Its independence has been important and has resulted in the organisation assuming a leadership role in developing new approaches to community engagement and social change. A role beyond that traditionally expected of a symphony orchestra.

The organisation now places its learning programme at its heart, presenting two parallel public messages: the international status of the Royal Liverpool Philharmonic Orchestra and its local impact through pioneering educational and community development work.

In Harmony Liverpool is beginning to transform some of the deep-rooted professional characteristics of the orchestra. At the onset, a minority of players engaged with the learning programme, but this has changed significantly and players are now involved in leadership roles, leading ensembles, as coaches, role models and teachers, leading instrumental tuition and playing side by side with young musicians in rehearsals and concerts.

Part of the place

This programme may claim to be changing lives and communities, but it is arguably also changing the way that orchestras operate and in turn how they serve their cities and places. This value is precious as it has been co-constructed between the organisations involved, the artists and teachers, the participants, community partners and residents, as well as decision- and policy-makers.

When a cultural organisation perceives itself as part of the community rather than an outside benefactor bringing resources to it, the potential role of the orchestra in society is maximised and everyone benefits. Liverpool Philharmonic has become a part of the place.

Susanne Burns is an independent consultant, researcher and evaluator in the cultural sector.
www.susanneburns.co.uk

Part of the place
Relationships with a future