Growing slowly and organically has helped Kidderminster Arts Festival respond to the needs of local artists and the community, says Loz Samuels. 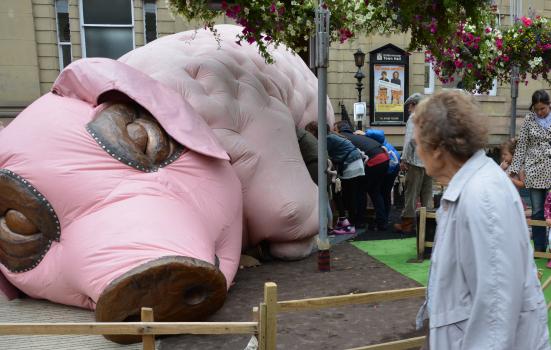 'Pig' by Whalley Range All Stars

When Kidderminster Arts Festival (KAF) was born in 2003 it was not seen as a long-term project, but just as an exploration of interest in a wider cultural offer in the town. The event attracted 2,000 people to a handful of locally generated exhibitions, workshops and street entertainers.

In 2005, I took over as Director with a vision to stage an exciting, diverse festival that would grow and evolve over time. Ten years on, we present on average of more than 65 acts, shows, events and exhibitions to over 100,000 people over a two-week period in August.

KAF has grown organically, gathering a core of local artists and organisations who contribute to the programme. Their work is stimulated by themes that local people have prompted and can relate to, such as local WWI stories, tattoo culture, the historically important carpet industry and now the local music culture.

These may not sound like particularly unusual or exciting themes, but with imagination and a contemporary slant we have attracted local and nationally known artists who have produced a series of unique commissions, many of which have toured well beyond the festival both in the UK and overseas.

The festival has filled the gap in contemporary yet accessible arts. We know festivals aren’t a fix for a town’s problems but they can have a significant positive impact – building local confidence, contributing to the local economy, attracting funding, building community engagement and nurturing local creative industries.

It is still relatively early days for KAF, yet it has already made a tangible difference to the town’s cultural landscape. It has stimulated local groups to join in with standalone elements that are embedded in communities that would be traditionally hard to reach.

KAF has become a building block for artists developing their skills and broadening their practice. Local poet laureate Heather Wastie said: “I have been inspired by other performers, had performance opportunities of my own and enjoyed being part of a network of artists who support each other. This has all had a positive impact on my creative output.”

Kidderminster, like many other small towns, is suffering a decline in shopping on the traditional high street. Councillors and residents are looking at proposals for regenerating areas of the town centre with options to include a blend of shops, leisure, commercial and housing.

These proposals include ideas for attracting residents and visitors into the town centre in the evenings. The music theme has been incorporated into a new strategy highlighting the importance of culture in the town’s future.

We are publishing a prospectus aimed at businesses with a view to them sponsoring the event. This prospectus has been commissioned thanks to funding from Worcestershire County Council and reflects the introduction of a commercial approach to the festival prompted by necessity and an eye on the future.

As I write this, we are awaiting the outcome of a funding application to enable the creation of an ambitious ticketed show ‘Access all Areas’ by Metro Boulot Dodo. This show will use iBeacon technology and live performance in an immersive installation bringing to life musical moments, social history and backstage antics.

It will be the most ambitious project the festival has seen and hopes to draw broader regional audiences that have an interest in the town and its approach to culture. It will offer an opportunity for local performers to be cast, giving them a new challenging experience through workshops and mentoring.

The move to present a ticketed show marks a shift towards planning for the sustainability of KAF. It’s a risk but I think it’s an essential move with the hope that loyalty which has been nurtured with local audiences will pay off.

The festival has evolved to a point where it offers a real opportunity for local venues and artists to experiment with programming a break from convention and take creative risks with the support that the reputation and publicity the festival offers. That’s an achievement we are really proud of.