The evidence suggests that a diverse workforce will bring a diverse audience. So it’s time for the arts to be bold and lead the diversity charge, says Sam Colt. 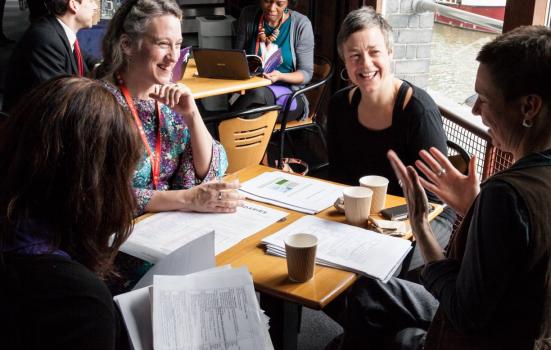 The empirical evidence shows that the percentage of women working in the arts is over 50% at all levels – far higher than many sectors in the UK economy – so it would be easy to conclude that the battle for gender equality is won. However, it is plain to see that as with the commercial sector, gender equality drops significantly when we look at the major national arts institutions, where with some notable exceptions, the top jobs continue to be held predominantly by men.

It is unlikely that the reasons are unique to the arts sector. Much has been said about the challenge of managing childcare (and increasingly parent care) around the extended working day of senior executives. Law firms have acknowledged that despite attracting equal numbers of men and women into the profession as trainees, they are losing vast numbers of women in their thirties who decide that if they want a family, law is not the profession to follow. Clearly, the arts sector does not face the same problem but something clearly happens at the top. Surely few sectors demand greater out-of-hours commitments of their chief executives than the arts sector. Hosting VIP guests at performances, private views or opening nights goes without saying, but the increasing demands on institutions to fundraise adds a plethora of dinners, breakfasts and meetings that rarely fall within the working day. Add this to the not insignificant responsibilities of running large, complex organisations and we must surely worry that the barriers are increasing rather than decreasing, and there appears to be no obvious solution.

The sector must continue to strive to ensure that it does everything in its power to retain and develop its finest female talent, but we must also acknowledge that gender is only part of the wider diversity debate. The New York-based Center for Talent and Innovation in a recent survey found that “when teams have one or more members who represent the gender, ethnicity, culture, generation, or sexual orientation of the team’s target end user, the entire team is far more likely (as much as 158% more likely) to understand the target, increasing their likelihood of innovating effectively for that end user”. This seems pretty obvious and, if true, suggests that all the hard work that goes on across the arts in terms of broadening audiences through outreach and education could be much more effective if the organisations themselves were more diverse. Clearly, there is something of a chicken and egg scenario here in that if the artistic output appeals to a narrow demographic then by definition it is likely that the same demographic will be drawn to work in the sector. Great work is being done and real progress has been made to broaden artistic programming but it requires an appetite for risk at executive and board level.

There is a stunning example from the world of fashion that illustrates the ability to shift audiences almost overnight. When the French fashion house Balmain appointed Olivier Rousteing as head of its women’s design studio at the age of 22 and promoted him two years later to Creative Director many thought it brave if not foolhardy. But the risk paid off and the young, charismatic Rousteing not only stamped his own creative flair on the collection but also brought with him the cool crowd. There are other examples where bold decisions have paid off: Pearson flourished under the leadership of Marjorie Scardino, the FTSE’s first female CEO; and Birmingham City Football Club didn’t regret appointing Karren Brady as its Managing Director at the age of 23.

If creativity is “the ability to transcend traditional ideas, rules, patterns, relationships and to create meaningful new ideas, forms, methods or interpretations” then diversity in its broadest sense is surely the fuel for creativity. In this sense arguably no sector understands diversity like the arts. Combine this with the sector’s unquestionable appetite for risk, and the arts should be leading the diversity charge. It is about being brave and nowhere does brave better than the arts.

Sam is speaking at No Boundaries 2015 conference later this year.