What happens to sculptures and other artworks in a forest trail over time as they surrender to the elements – or to the native bats, asks Cathy Mager. 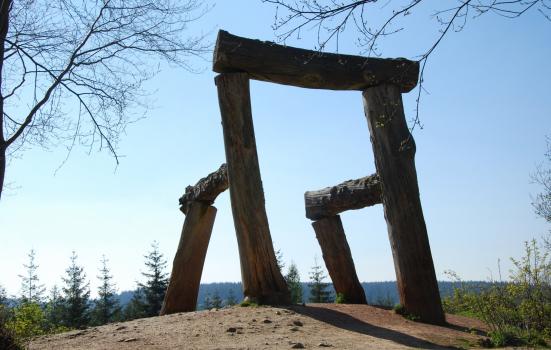 After 15 years of working in public art in London, in the concrete surrounds of the Southbank and tunnels of Art of the Underground, I relocated to the stunning woodland scenery of the Forest of Dean Sculpture Trail. I have spent the last six months exploring my new outdoor office, a 4.5 mile path that features 16 contemporary artworks including sculptures by David Nash and Annie Cattrell. I’ve discovered it is not just a place of art for a human audience with nature as an attractive backdrop but an environment where wildlife and art have merged and co-depend. This became apparent when, soon after I started my role, I was asked to work with ecologists to safeguard the future of a family of bats living in one of the most iconic but fragile artworks on the trail, Place by Magdalena Jetelova (see photo above).

So as the trees and plants fade and change each year on the trail, the artworks follow the same unpredictable pattern

Place is due to be decommissioned at the end of this year. It was the artist’s original intention for the sculpture to be a temporary piece that would eventually be burnt to make charcoal. Charcoal-making has long been a popular tradition in the Forest of Dean and she envisioned the artwork would transition into a giant charcoal pile. But the giant chair became an instant hit with visitors and it was decided to leave the sculpture standing. Its huge tree-trunk arms and legs have withstood the force of many storms for three decades, but have been slowly disintegrating, allowing cracks and crevices to open up, providing the perfect hiding place for the forest’s native bats and more recently a nest of blue tits. However, the bats squatting in the sculpture have posed a dilemma. The work has been gradually tilting for many years now, and despite some efforts to delay the natural degradation of the piece, it is beyond repair and will eventually be no longer deemed structurally safe.

I will be carefully planning and consulting with conservation experts to determine how to provide a safe and long-term home for the bats. Following this, with Magdalena Jetelova’s blessing, the artwork will then be charcoaled and recycled by artist Onya McCausland and local community groups who will use it to produce drawings and paintings for a new exhibition next spring.

The founders of the trust in 1986 were inspired by the Land Art movement and for the last 29 years the trust has, for the most part, let nature rule how long the artworks remain in the forest. Its sculptures are left to the elements, to degrade and be vandalised by the plants and wildlife around them. One of the Forestry Commission founders Martin Orrom explained that the original vision was that the sculptures act as “catalysts for our imaginations, releasing new ideas in us about our relationship to nature and the environment, and prompting a sense of awe and wonder”.

Some other artworks on the trail have disappeared completely or have been removed for safety reasons. Others are camouflaged by foliage or have been consumed by the forest floor, lost, buried beneath plant life and soil. So as the trees and plants fade and change each year on the trail, the artworks follow the same unpredictable pattern. As the legendary giant’s chair surrenders to the elements and falls into the forest floor, I am working with the board to plan the next generation of sculptural landmarks inspired by the heritage and landscape of the forest. Most recently, Henry Castle has been commissioned to lead a major new artwork due to be completed next summer. I will be watching keenly to see what the trail’s resident wildlife makes of his work and how they may change and determine its future.

Working with nature
The arts in a box