What better place to learn about using the arts to help older people and those with dementia than in Japan, where a quarter of people are over 65. Nick Ponsillo reports on his recent trip. 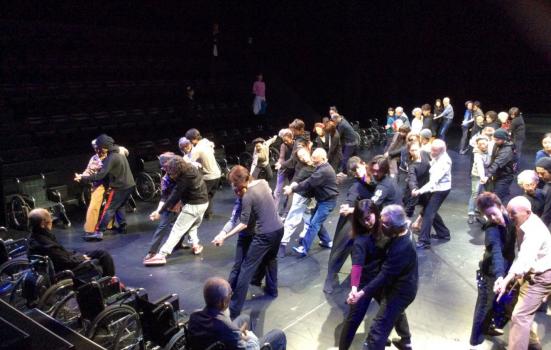 This April a group of UK arts professionals travelled to Japan to share experiences of working with older people and to gain a deeper understanding of Japan’s approach to an ageing society. Organised by the British Council Japan, Baring Foundation and Calouste Gulbenkian Foundation, it was a fascinating and inspiring week which challenged us all.

Active ageing is one of the most important social agendas globally and particularly pertinent in Japan. Currently 25% of its population (32 million) is 65 or older, and 4.6 million people live with dementia with another 4 million likely to develop it in the coming years (the figure in the UK is currently about 800,000 diagnosed with dementia). With the Tokyo 2020 Olympics and Paralympics on the horizon, there is a tangible desire to create a strong Cultural Olympiad with London 2012 cited as a model of excellence. Tokyo is looking to use 2020 as a catalyst to galvanise support for the role of the arts in wider society and how the arts can respond to the growing population of older people.

Over 1,200 older people with little or no theatre experience auditioned… took part in training for five days a week, four hours a day for an initial period of 12 months

There is a clear desire among the organisations, artists and businesses we met for the arts to become a more accepted and widespread community resource. There is already some long-standing and fantastic activity taking place but my impression was that this occurs in unconnected pockets. There seemed to be a real need for these pockets to be connected, to drive the agenda and make a significant impact.

Since 2012 Manchester Camerata has been working with people living with dementia in both care homes and community settings across the north west of England. Through Music in Mind music therapists and professional musicians work as co-facilitators, using a group model based on creative improvisation that enables self-expression at all stages of the illness. Our partners, the Alzheimer’s Society, Age Friendly Manchester, Tameside Public Health and the University of Manchester, are key to the ongoing development and success of this work.

Crucially, research and evaluation is embedded within Music in Mind and we have a growing evidence base that the project improves quality of life, develops relationships between people with dementia and their carers and reduces the use of medication. The way in which the project operates, the fact that research is a core part of the activity and the way in which it functions across sectors, was of particular interest and was principally the work I shared at the conference.

Measuring impact was a key line of enquiry during the conference workshop sessions and there was a sense that to justify the role of the arts, research needs to be quantitative. This led to further discussion about the right type of research relationships to fit the right type of project activity. This is something that we have been discussing in detail with our colleagues Professor John Keady (University of Manchester) and Dr Christine Milligan (Lancaster University) and how the current methods don’t really get to grips with explaining the impact of Music in Mind for the person with dementia. To begin to tackle this, we have been awarded an Economic and Social Research Council grant for a CASE studentship which will see a PhD student develop an ‘in-the-moment’ multi-sensory assessment tool for dementia.

It was evident from a presentation by Takehito Tokuda about the Fujinomiya City dementia-friendly community that this is an area in which Japan is more developed in its thinking and implementation. Dementia isn’t the problem, but our communities are. It was exciting to see that business, community, government and third-sector organisations are working together on a number of holistic initiatives that move way beyond an awareness of dementia to tackle a range of issues from effecting a total transformation in the way society thinks to the labelling, fragrance and bottle design of shampoo.

One of the most memorable experiences was our trip to the Saitama Art Theatre, meeting members of Saitama Gold Theatre. Established ten years ago by Yukio Ninagawa, the renowned Japanese director, over 1,200 older people with little or no theatre experience auditioned for 48 places to form a new theatre company and took part in training for five days a week, four hours a day for an initial period of 12 months. The company produces work of the highest artistic standards, gaining an international profile. We witnessed a short excerpt from its current production of Richard II which was breathtaking. It was a privilege to share such an incredible experience and hear company members explain how being involved has made such a positive impact on their lives, including overcoming paralysis. Their integrity and constant search for the highest artistic standards as individuals and a company was an inspiration, left many of us speechless and was evident in a modest comment by a 90-year-old member who said that they didn’t consider themselves to be professionals yet.

I left Japan full of inspiration and determination. I had witnessed some incredible work and encountered many special people and artists working with older people for genuine and selfless reasons in the sincere belief that the arts can and should play a significant role in society and support people to make positive changes in their own lives. Our small sample of this work in Japan demonstrated to me that these pockets of activity are primed to become more mainstream. I feel sure that this belief and desire will be realised to its absolute maximum by a united arts community and nation in the lead up to, during and after a successful Tokyo 2020.

Nick Ponsillo is Head of Learning and Participation at Manchester Camerata.
www.manchestercamerata.co.uk