Crowdfunding for the great and small

With little known about how small arts organisations can most effectively use crowdfunding, Oonagh Murphy decided to find out through leading a mentoring and development programme. 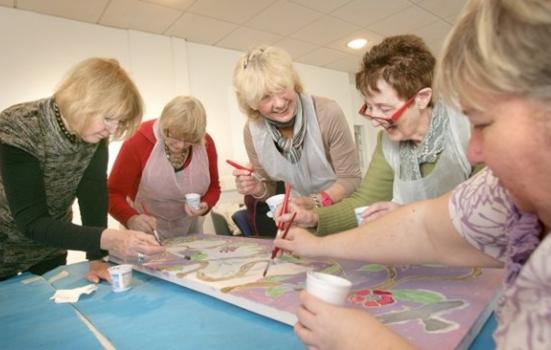 Crowdfunding has become a hot topic in recent years and, with rewards-based crowdfunding generating £20.5m in the UK alone in 2013, it is a phenomenon that is hard to ignore. While there are lots of examples of technology solutions and products doing well, there has been little research into how smaller arts organisations can use crowdfunding successfully. To fill this gap in both knowledge and practice Arts & Business NI commissioned me to develop Amplify: a crowdfunding mentoring programme for the arts. Brona Whittaker, its Arts Manager, said: “We wanted the programme to mentor arts organisations from concept to campaign launch, and then to research and evaluate the potential uses for crowdfunding within the local cultural sector.”

The first component of this programme was the development of a crowdfunding toolkit. It features interviews with creative entrepreneurs from publishers to a printmaker who successfully used crowdfunding to support their work. One interviewee said it was like a 24/7 presidential campaign and another emphasised the importance of having a network in place of campaign evangelists. However, a key theme that emerged were the benefits of crowdfunding beyond the money. For some, crowdfunding helped to raise an artist’s profile, allowed them to develop new products as rewards and test out market interest in their work. For others running a crowdfunding campaign helped to develop new contacts and identify a new market for their artwork in the US.

Keen to embed the idea of crowdfunding being more than just the headline figures raised, I delivered a masterclass for Arts & Business NI client organisations with the focus on crowdfunding as a platform for advocacy, PR and partnership development. We then invited participants to submit an application to take part in a comprehensive development programme that included mentoring from myself, Whitenoise Design Studio and creative director Mike Fleming. Through a competitive application process we selected four arts organisations, each with very distinct campaigns:

Each campaign, and indeed each organisation, is very different, but a number of common themes emerged. Most significantly was the struggle to get corporate backers to financially contribute to the campaigns. It was not that there was a shortage of support or indeed willingness to fund these campaigns, but instead it was procurement policy that stood in the way. Procurement policy and crowdfunding are, it seems, often incompatible. One campaign manager summed up this problem well: “They were really interested in backing our project, but as soon as the procurement people got involved the brakes were quickly pressed.” This was a major issue and each campaign needed a mix of small individual and larger corporate backers to hit their target.

Although not ideal, rather than losing this support, some of the arts organisations that took part in the programme opted to receive funding in a more traditional way, for example, through a partnership agreement. Some organisations, such as a housing association and training provider, opted to back projects through a bank transfer to the organisation and not via the crowdfunding platform. This meant that some campaigns look unsuccessful on their campaign page but in reality have been really successful if we measure success in terms of advocacy, PR and partnership development. Sinead Owens from Wheelworks (The Art Cart) reflects: “The crowdfunding campaign has been a very exciting experience. Part of that has been the new partnerships we’ve formed and new networks we’ve created, including a partnership with iTeach. We’ve been able to raise the profile of the organisation and reach audiences we had never thought of reaching before, an example being a slot at this year’s Friday Night Mashup as part of the NI Science Festival. This experience is evidence to us that the success of a crowdfunding campaign lies not only in the amount you raise but in the support you receive aside from the money.”

As such, the biggest lesson for Arts & Business NI is that fundraising drives are an effective way to use resources, create a critical mass of support and drive real organisational change over a short and defined period. Crowdfunding opens up new conversations but it also presents barriers to engagement. Therefore a mixed methods approach that incorporates an online and offline fundraising target would be a more effective approach to delivering a successful fundraising drive within a small arts organisation.

How to… make the most of an art fair
My Research: Cats are your competition
Crowdfunding for the great and small
Strategies for a digital culture