Going with the flow

Stuart Nicolle shares the latest figures showing just how attractive the arts offer in the four countries of the UK are to those living outside their borders. 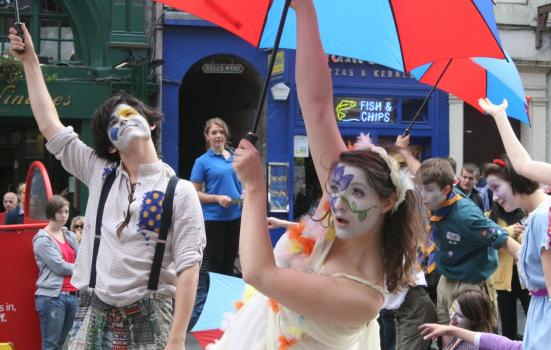 The Edinburgh Festival Fringe attracts visitors from across the UK.
Photo:

How did it go for you in 2014? Are you benefiting from the green shoots in the economy, or bowing under the pressure of public sector funding cuts and budgetary constraints? Did your revenues increase? Did you grow your customer base?

Well, the good news is that that for the UK as a whole, 2014 was another growth year for ticketed performing arts organisations. Average revenue growth was 4%, and as average ticket prices actually fell by 7p in this period, this growth can be purely attributed to more ticket sales last year. The even better news is that it’s not just the same people buying more tickets. There was also an increase in the total number of ticket buyers, meaning that more people enjoyed the arts last year than the year before. The only cloud on the horizon is the rate of growth, which in 2014 was significantly lower than in 2013, suggesting that the trend might be reaching a peak.

across the whole of the UK, 30% of ticket revenues come from people who live outside the ‘home region’ of a venue

But these national trends aren’t the end of the story. Deeper analysis can reveal other patterns of spending across the UK and shine a light on some interesting behaviour trends. For example, did you know that, across the whole of the UK, 30% of ticket revenues come from people who live outside the ‘home region’ of a venue? This figure reveals the significant propensity of attenders to travel around and beyond their own region, or country, to enjoy the arts. Purple Seven captures 70% of ticket sales by ticketed venues across the UK, and based on this data, the cross-border flows across the UK were as follows: 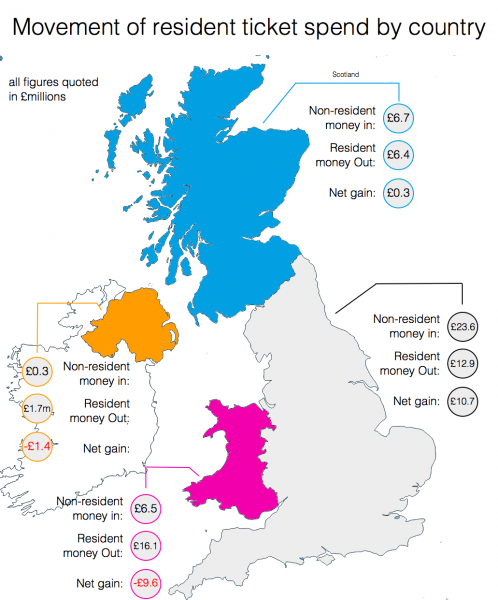 Sometimes the cause of regional flows is predicable. There is a huge increase in out-of-region spend in the months of July and August, especially to Scotland, where the festivals will account for the boost, and London, a magnet for holiday-makers at a time when many theatres in the English regions go dark. But the less predictable cross-border flows are particularly worthy of further investigation. In some parts of the country they may reflect travel-to-work areas; in others, it will be cultural tourism; but sometimes it will simply be that the quality of artistic programme in some parts of the country just isn’t thought to measure up, and people are willing to make an extra effort to attend an event further afield. And that would certainly provide food for thought.

Stuart Nicolle is Research & Development Director and founder of Purple Seven. This article is part of a series of articles on the theme ‘Insight into Audiences’, sponsored and contributed by Purple Seven.
www.purpleseven.co.uk

Purple Seven collects ticketing data for around 250 organisations, covering 70% of the UK’s ticket sales. All ticketed arts organisations can join FREE of charge, and receive a FREE quarterly report on their customers in context with the UK picture of arts attenders. For more information please contact: enquiries@purpleseven.com.

Going with the flow
My audience, our audience