If ethical questions lead us to pick and choose what is right and wrong from an artistic perspective, or to judge the credentials of our corporate funders, where do we stop? Michelle Wright calls for more debate about the moral high-ground of art, in the context of what arts organisations need to do to survive and thrive. 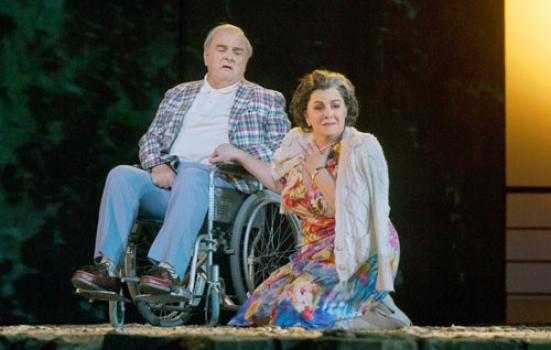 The Death of Klinghoffer at the Metropolitan Opera
Photo:

So who says that nobody is talking about opera? I recently attended the premiere of John Adams’ The Death of Klinghoffer at the Metropolitan Opera in New York. Never before have I been present at an arts event amidst such protest. As the opera’s alleged anti-semitism took centre stage, armed security surrounded the beautiful Met theatre, and with many protestors both inside and outside the performance, it was a night at the opera unlike any other.

For months now the staging of this opera has been at the centre of media and political attention, with high-profile political figures such as ex-New York City Mayor Rudy Giuliani speaking out against the opera’s inclusion in this year’s Met season. With Peter Gelb, the company’s General Manager, receiving death threats and his assistant needing the protection of a reinforced office window, the political sensitivities of staging this production have had a huge impact throughout the international arts world.

The work of artists often chimes with current reality and Klinghoffer is no exception. The opera depicts the brutal murder of an elderly wheelchair bound man at the hands of Palestinian terrorists. The story is powerful, not least in the immediate link that it makes in the minds of the audience to current political events, such as the ongoing Palestinian/Israeli conflict. However, the essence of the work for me evokes a much more straightforward and human commentary about the difficulties inherent in political and religious disputes that cannot find resolution. I often watch the international news in a state of discomfort, and Klinghoffer evokes the same unease. And of course that sense of disquiet escalates when you walk into an opera amidst hundreds of protestors with barricades and an armed police guard…

As I talked to some New York politicos it became clear that there was a sense of disbelief from the non-arts community that the Met’s senior leaders hadn’t prepared the political ground more thoroughly before announcing the staging of the controversial Klinghoffer. Yet the fact that the performance went ahead to a standing ovation somehow vindicated in my mind the decision to continue, at least from an artistic perspective.

It was such an unusual evening that I’ve been struggling to process my thoughts ever since. But one overriding thought prevails. Is what happened with Klinghoffer a sign of the times? And are there significant lessons in this story about how our major arts institutions now need to be run?

if we start to pick and choose what is right and wrong from an artistic perspective or a funding support perspective, where do we stop?

As Programme Director of the Arts Council England-funded Arts Fundraising and Philanthropy programme I have been training and working with a range of trustees, CEOs and senior leaders in the arts in England for the past 18 months. What has struck me in conversation with senior leaders, is that as funding for the arts becomes ever more challenging, we require our arts leaders to respond with an ever greater portfolio of skills. In this age of austerity, we require our artistic leaders to not only be excellent artistic implementers and curators but also stellar fundraisers, marketers and entrepreneurs. And if Klinghoffer is anything to go by, we may also need to add prowess in political debate, international relations, morals and ethics into the equation.

So is this brief simply becoming too much – and how on earth do we prepare the ground to train the next generation of artistic leaders?

It’s obvious that as the business of arts gets more commercial and more global, political dexterity is essential. But I also sense a shift in moral values that is heaping additional pressure on the debate.

In the world of enterprise and fundraising where I spend most of my time, I see it most clearly in relation to the sources of income generation. The issues around arts organisations taking sponsorship from firms with a chequered ethical history have never gone away. With sit-ins at the Tate over BP sponsorship and recent protests at the National Gallery over Shell, as well as the recent very political stance from the Tricycle theatre over the Jewish Film Festival – the debates rage on. It’s understandable that arts trustee boards are getting ever more moral and risk averse in this wider context. The significant worry, though, is that not only does this not support the creation of great art, but it can be the death-knell to a sense of entrepreneurial spirit and the creation of the new business models that our arts organisations so desperately need.

So my final thoughts on The Death of Klinghoffer are as follows: if we start to pick and choose what is right and wrong from an artistic perspective or a funding support perspective, where do we stop? The trustee who objects to taking money from a bank, should also surely have the same stance to taking a major individual gift from a banker? If we rile over tobacco sponsorship, do we just conveniently forget that the sector’s historical support from Philip Morris and others has enabled many of our music and dance organisations to be where they are today? If we can’t put on contemporary works of art that carry a political message, then do we also turf out the works of art in our great institutions that were historically inspired by current affairs?

With the continued threat of further public cuts to the arts to come, we need a genuine, real and human debate about the moral high-ground and ethics of art, in the context of what arts organisations need to do to survive and thrive.

After all, at the heart of great art is its ability to challenge – and John Adams’ opera does just that.

Interesting article, Michelle. I saw Death of Klinghoffer at ENO two years ago. It was gruelling to watch (I am talking about the content, not the production!) but the one thing it clearly is not is anti-semitic or even anti-israeli. The problem is that it is even-handed and, in the diametrically opposed positions of the pro-isrealis and pro=palestinians, being even-handed is seen as being in favour of the opposition. BP sponsorship, depiction of muslims in a DV8 dance piece, Myra Hindley's face made in small hand prints....the list of politically controversial issues around arts and arts institutions is literally endless. I once interviewed the opposition spokesperson on culture in Spain who was furious that artists they had funded when previously in power had dared protest against spanish participation in the invasion of Iraq. Such ingratitude would be punished with funding cuts when they returned to power! Which indeed is what happened. I am not sure there is such a thing as a moral high-ground (who defines it? who occupies it?) and for arts organisations I think there are only questions of artistic quality, creativity and the law. Thereafter it is question of standing firm.

The long tail for fundraising and philanthropy
Communicating with donors at a time of crisis
Power to the people: how arts charities will have to change over the next 10 years
Wooing the young billionaires
The crisis in arts fundraising talent
Is it time to reimagine the trustee board bank?
We need to work harder on donor diversity
Are you sitting too comfortably?
Big vision
The elephant in the room – should trustees be obliged to give?