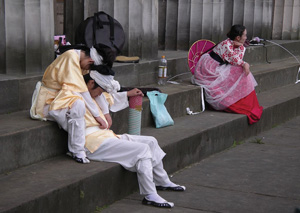 Last year, Arts Council England’s (ACE) National Portfolio Organisation (NPO) decisions signalled a significant change in the arts funding landscape and promised a more strategic approach. As part of this changing landscape, there has been a new focus on touring. Three separate mechanisms for funding touring now exist. Firstly, some of the new NPOs receive part of their core funding specifically for touring activity. Secondly there is a growing ‘Grants for the Arts’ pot to which organisations (other than NPOs) can apply for touring. And thirdly, a new Strategic Touring fund has been established, open to NPOs and others.

Here at the Independent Theatre Council (ITC), 80% of whose members are touring companies, we welcomed the stronger more strategic attitude to touring that emerged from ACE. In the past I have often found ACE’s relationship to touring paradoxical. Its former Touring Department was preoccupied with venues, and when that department was abolished in one of the restructures, there was, for a time, talk of ‘distribution’ rather than touring. We were all relieved when that concept was dropped! ‘Touring’ is fully back, both in the ACE vocabulary and consciousness. There has been talk of ‘warming up cold spots’, reaching hard to reach places and people, and encouraging collaboration and partnership. The sector has been excited by these prospects and keen to hear what this strategy would mean in practice. Details of the new Strategic Touring fund were announced later than planned but eventually got out there, and then began the round of ACE road shows and briefings. Questions such as “What is the balance between ‘breadth of provision’ (reaching more people and places) and ‘depth of provision’ (offering more provision to places which already have it)?” and “How are you ‘stretching’ your reach to go beyond your regular touring network?” were at the heart of ACE’s thinking. But we were never really going to understand exactly what was meant by ‘strategic touring’ until ACE announced the first successful applicants.

So what has been the outcome of this first round of bids? Well, the big shock is that there are only nine successful projects (see AP252). The focus on young audiences is expected and welcome. But perhaps naively, with a funding pot worth £3m and a minimum grant application value of £10,000, I was expecting to see at least a couple of dozen projects spread around the country targeting a broad range of potential new audiences. The project that really raises questions for me is the £1,065,000 award to Tate – over a third of the total value of this round. Their submission to extend the tour of Artist Rooms for a further three years will have undoubtedly been presented in a very impressive bid from a very experienced and well-resourced development team. But its position as the single biggest award winner in this funding round begs questions about the ‘strategic-ness’ of the touring fund, and sends warning signals to those who were rejected for this first round of funding and those still thinking of applying. Some ITC members had told us that they had been actively discouraged from applying in this round – and up to this point we wondered why.

It could no doubt be argued that the ACE grant to Tate is primarily for the new digital element of the tour – but ‘digital distribution’ is not what the Touring Fund was designed for. Digital arts and experiences are proliferating exponentially – a good thing, but a different thing. ACE recently launched ‘The Space’ as one of many interesting experiments in making a range of arts experiences widely available digitally, and valuable though it is, this form of digital ‘distribution’ is not touring. One of the primary purposes of touring is to bring the live experience to people in their communities – this is what makes it so uniquely important and effective. The audiences that are hardest to reach often need to be engaged in the most intimate and accessible ways. Schools, youth clubs, care homes and village halls are just a few of the many non-traditional spaces where people can encounter ‘great’, but not necessarily ‘elite’ art.

Future applicants to the strategic fund will be looking to this first round list (at least in part) for inspiration, guidance and a clearer steer. I fear that instead it has led to mystification, disappointment and a growing suspicion that in the new arts funding landscape, those that have already will be given more. The growing divisions in our society are being mirrored subtly in our arts ecology.