Nicky Webb describes the birth, development and culmination of a European collaboration that has led to dialogue and exchange between artists, curators, programmers and producers 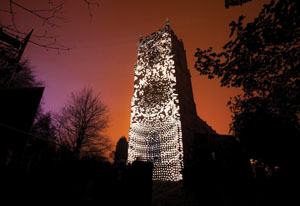 In February 2012, a symposium in London saw the gathering of around 70 lighting designers, producers, artists and other creative practitioners to consider the achievements of the collaboration between three European light festivals. The event was the culmination of Lux Scientia, a trans-national project orchestrated by Artichoke, which produces LUMIERE, Durham’s recently established light festival. It set out to review the experience of the artists involved, to consider some of the challenges and pinpoint considerations to take on board for the future projects of this kind.

The collaboration began in 2010, when Artichoke were in the early stages of developing a second LUMIERE festival. While the tradition of light festivals is well established in Europe, it is a relatively recent development in the UK and we were interested in collaborating with other European light festivals, to build networks and share experience and best practice across festivals.The catalyst came in the form of a Portuguese curator Mario Caeiro, who had programmed the Luzboa Festival in Lisbon and had relationships with a number of other European festivals. Mario introduced Artichoke co-director Helen Marriage to the Skyway Festival in Torun (Poland) and Valgusfestival in Tallinn (Estonia), and she quickly saw that these medieval cities had much in common with Durham, even if their festivals were different in character and scale. Together Caeiro and Marriage planned Lux Scientia, with the aim of commissioning new works exploring the relationship between science and art and to share them between the three festivals, which agreed to work collaboratively to develop, deliver and promote the three pieces at Skyway and Valgus festivals before finally bringing them to LUMIERE in November 2011.

Artichoke successfully applied for funding for the project from the European Commission’s Culture Fund – the first time that Durham had been able to access funds from this pot – and was awarded €200,000 to be split between the three festivals for the project. The objectives of this fund include the promotion of intercultural dialogue, the mobility of people and works of art, developing new ways of working and new practices and encouraging the transfer of skill and knowledge.

Lux Scientia commissioned three artists, one from each country – Simeon Nelson (UK), Dominik Lejman (Poland) and Leonardo Meigas (Estonia) – who each collaborated with a scientist to develop a lightwork that explored both the scientific and aesthetic aspects of light. As well as artistic aims, the three festivals agreed to share experience and knowledge, through a series of seminars and conferences at each festival, concluding with a dynamic symposium to be held after the event.

As lead producer, Artichoke was responsible for coordinating the collaboration, ensuring that the project was properly documented at each festival and that the reporting process was followed. Artichoke also created a website for the project and prepared a communications toolkit to share with partner festival colleagues. The genesis, size and funding partners for each festival had an impact on how Lux Scientia was communicated and delivered, and this pointed up structural issues in the collaboration, which are ongoing challenges in trans-national projects of this kind. From the artistic point of view, the collaboration posed particular challenges. At the symposium, all three artists agreed that seeing their work in different settings both complemented and challenged interpretations of the work. Showing on home soil could have positive and negative consequences, in terms of artist recognition, the resonance of the artwork, as well as where the piece was sited. There were similar issues from a production point of view, given the different economic, technical and administrative contexts in which each of the festivals operated.

The round-table discussion that concluded the symposium brought together the organisers of each festival, who were joined by the Italian light curator Gisella Gellini, and the director of one of Europe’s largest light festivals, Robbert ten Caten of Glow, Eindhoven. The partner festivals agreed that there had been tangible benefits from the collaboration and that they would continue to share work across Europe. The creation of more structured channels of communication would help with this and with other opportunities for cross-border promotion which could be pursued in future. The discussion opened up questions about the way each festival was programmed, fluctuating funds and resources, and differing priorities in terms of what local funders and sponsors regarded as important. What became clear is that as the festival landscape continues to expand, European and trans-national collaborations are essential ways to generate new audiences, build networks, and create dialogue and exchange between artists, curators, programmers and producers.

However, the future of European collaboration is also dependent to a very large extent on the funding that exists for it. Lux Scientia was funded by the EU Culture Programme, whose remit in its current form exists only until 2013. The new European Culture Fund 2014–2020 is still under discussion with member states, so one of the major sources of funding for this kind of collaboration hangs in the balance.