There are more festivals in the UK now than any other time in history. Leila Jancovich looks at the growth, development and sustainability of alfresco arts 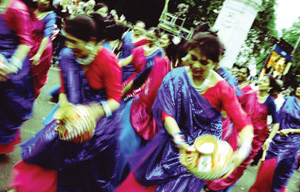 It would be hard to find a town or city that does not host a festival these days. It’s an umbrella term that covers a range of activity, but the defining feature is their short duration, distinct from permanent programmes in theatres, galleries and museums. Often, the one-off element of festivals allows them to take more risks with programming. The greatest challenge, however, is in retaining profile beyond the festival dates themselves.

NORTHERN EXPOSURE
Through the Yorkshire Festivals Network (which I co-ordinate), we have tried to address this by providing a year-round presence to engage regional partners, and provide training, research, advice and networking opportunities for festival managers. We have worked with the tourist board to identify which festivals could develop tourism and have also worked with Arts Council England (ACE) to identify which festivals contribute to artform and audience development. Along with Create in Scarborough, we created an evaluation toolkit to assist individual festivals in establishing benchmarks. While there are a number of local festival networks, as well as national (the Association of Festival organisers and British Arts Festivals Association) and international networks (the International Festivals and Events Association and European Festivals Association), none of them have the staffing and infrastructure associations available for, say, theatre (which has the Theatrical Management Association and the Independent Theatre Council, to name just two). But this should be a main priority if we are to achieve a similar level of professionalism within the festival industry – not least because it remains one of the country’s fastest-growing cultural sectors.
Alongside massive growth in the number of festivals being organised, there is also increased city and regional competitiveness. This has led, at a policy level, to local authorities using festivals to raise the profile of their area. This has led to moving from local, community and artist-led festivals, to professionally managed and imported major events. There has also been growth in impact studies to justify investment in the latter, but this research is rarely comparative, either between different types of festivals or indeed between having a festival or not. Likewise, claims of economic benefit rarely consider whether this benefit is additional or replaced from elsewhere; greater clarity is needed about which festivals meet which objectives.

DO FESTIVALS NEED TOURISTS?
There is evidence that attracting new tourism requires the event to be distinctively artform specific. Provence in France can truly be called a region of festivals, given that every town hosts a different artform each July while, Edinburgh is the uncontested city of festivals. Understandly, they both attract masses of tourism. However, free outdoor work can eradicate many of the barriers to arts attendance experienced by building-based organisations. This engagement may be jeopardised by an influx of tourists. When, for example, the Moonraker Festival near Huddersfield attracted large numbers after a feature on TV, the festival became unmanageable for its volunteer committee.
Festivals and stakeholders need to understand objectives and consider whether the priority is profile and tourism, engaging local people, or artform development. It is wrong to assume that all festivals can – and should – do everything. In Manchester, the International Festival has raised the city’s profile but Manchester International Arts, which has been running free street arts festivals for decades, has all but stopped operating.

FESTIVAL SPIRIT
But the majority of festivals do not form from a wish to meet policy objectives, but come from an artistic vision or a community action. Increased profile, economic impacts and instrumental social benefits are by-products rather than core objectives and the ability (let alone the desire) to justify themselves in these terms makes it hard for smaller festivals to gain significant investment.
In Yorkshire, for example, festivals have patchy relationships with local authorities, regional development agencies and ACE, in contrast to neighbours in the North East and the North West. However, the region’s festivals still attract an average audience of 12,500 per festival (clearly with some attracting many tens of thousands more). Today, there are more than 100 arts festivals with an estimated audience of 1 million people in Yorkshire.
These figures are testament to the continued energy of festival teams and our national passion for the special event. Arguably, when clustered together, the contribution of these small festivals are as significant as the more major events – a point often missed by policymakers. But the future of the festival sector is critically dependent on better policy understanding of the different identities, audiences, roles and impact different festivals can have. In addition to that, the industry must work on building on greater networking opportunities, professional development and joined-up thinking, if the sustainability of this vibrant, popular and culturally valuable sector can be achieved.

LEILA JANCOVICH is a Senior Lecturer in the UK Centre for Events Management at Leeds Metropolitan University, course leader for the MSc in International Festivals Management and Co-ordinator of the Yorkshire Festivals Network.
E l.jancovich@leedsmet.ac.uk
T 0113 812 3480
w http://www.eventsandfestivalsreserach.com
This week Leila has come across art in unexpected places, as part of the Norfolk Open Studios and Open Up Sheffield. The streets of Hebden Bridge, where she lives, have also been heaving with activity from the Big Green Weekend festival.