Charlotte Arrowsmith, who is performing in two plays with the RSC this summer, explains the challenges and opportunities involved when deaf actors are cast in mainstream productions. 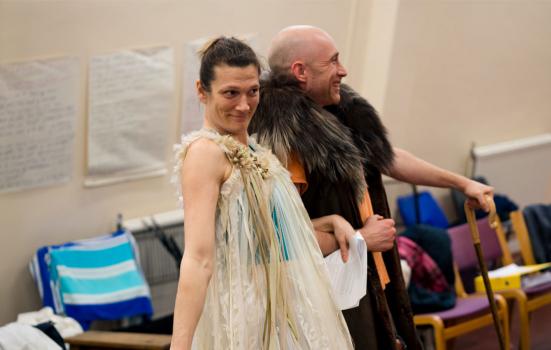 Charlotte Arrowsmith in rehearsal for As You Like It
Photo:

In 2001 I discovered that the University of Reading was offering a BA Hons course in Theatre, Arts, Education and Deaf Studies. It was a welcome opportunity to explore a long-held ambition to perform, one which had not previously been accessible to me.

It has been difficult to get parts in mainstream productions as there are very few roles written for deaf people. As a consequence, many in the industry don't know how to accommodate deaf actors, such as by adapting characters. I have mainly worked in small-scale theatres with a deaf cast or with a mixed cast of deaf and hearing signers, doing R&D projects, touring and short films.

So, when Gregory Doran, Artistic Director of the Royal Shakespeare Company (RSC), was looking for a deaf actor to work with him on Troilus and Cressida, it was an exciting opportunity for me. I was lucky to be cast in the role of Cassandra and I worked hard to live up to his faith in me.

There are many difficulties facing a deaf actor in a mainstream production, the most obvious being communication. That, and the need for extra time in the rehearsal process for the translation to develop and to absorb the framework of meanings from the words and sentences. Extra time is also needed for visual cues from other actors, so that I’m aware of where we are in the scene and what lines are being said. I can then feel confident on stage and deliver my character with conviction and believability.

This summer at the RSC I am the only deaf actor in character. I am also an understudy which I have never been before. A new personal challenge. It has been a learning curve for me, especially in determining how to make a scene work and adapt to the dynamics of the communication between characters.

Being part of the cast, I always try to offer creative solutions, providing a sort of artistic licence to add British Sign Language (BSL) and deaf culture to the scenes. It’s vital that there’s a natural reason for the use of BSL and to make deaf culture a part of the story.

The majority of the audiences are hearing, and that's the norm for any mainstream performance with a mainstream company. So showcasing BSL on the RSC stage has been a pioneering decision. It helps to open the minds of the audience to diversity, as well as open their eyes to experiencing words visually. I hope that they appreciate the theatre that I convey in the characters I’m playing. In my roles as Audrey in As You Like It and Curtis in The Taming of the Shrew, I use a mixture of BSL, sign theatre, physical theatre, sign mime and even some sign poetry. This is because the language of BSL does not always fit with the script or the spoken word.

Deaf actors have the same responsibility as others, in that projecting the English language on stage differs from street conversation and normal day-to-day speak. We must adapt BSL in the same way into a theatre piece that is artistic. We also need to be mindful of accessibility for both deaf and hearing audiences - they will identify and understand emotions and gestures that convey the spoken word differently.

If a company wants to cast a deaf actor, there needs to be a clear vision for how BSL and deaf culture will intertwine with the characters and dynamics of the entire cast. Ideally, when a deaf actor is cast, a deaf understudy should also be cast. Being the only deaf actor can be isolating – and being in a big cast can be daunting. Having a deaf understudy, or more than one deaf actor in the cast, widens the opportunities for other deaf actors and enriches the experience of the whole company. It adds depth to the interaction between deaf and hearing people, keeping deaf culture alive in the scenes that require their input.

The RSC is also passionate about providing captions and BSL integrated performances. Having this awareness regarding access is paramount to reaching deaf audiences. Deafness affects people differently, whether they are BSL users or hard of hearing and using captions. BSL-integrated performances include the cast working with the interpreter closely and making sure there's a fluency between dialogue.

This exciting opportunity opens all our minds and hearts, and the vision of equality in the arts becomes more real every day.