In times of conflict 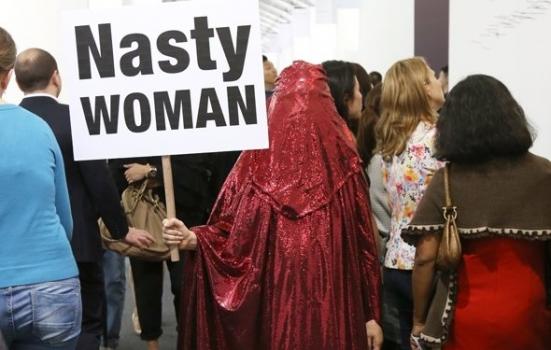 In recent months it feels like the political has expanded to fill every possible crevice of our lives. Terrorist attacks in Baghdad, Somalia, Brussels, France and now London. Ongoing environmental catastrophe. Conflict in Syria and Yemen. Brexit, Trump, a divisive election campaign in the US and a divisive EU referendum campaign in the UK. The list goes on and on.

I’m Executive Director of Shubbak, a multi-artform festival held in London every two years, that presents the work of artists from across the Arab world. We don’t have the specific aim to present politically engaged work, but in seeking out work that is exciting and challenging it is inevitable that much of it is politically charged.

We believe we need to open the stage to artists to explore complex political developments and difficult topics, and to allow audiences to join them in that exploration. This gives audiences the opportunity to engage with different aspects of the Arab world than those presented in the news. Artists can present challenging questions, without having to provide all the answers.

There is currently a rise in interest in the work of artists in areas of conflict. This work runs the risk of ascribing too much power to art, whereby it is seen as a potential panacea to the ills of the world.

In being aware of these risks, I believe that art can play an important role in times of conflict, highlighting alternative narratives and a diversity of voices. As a coordinator with Highlight Arts, we work with artists in areas in times of conflict, from Syria to Pakistan, Afghanistan to the Arctic.

As the organisation aims to shatter stereotypes around those living and working in a certain country, such as Iraq, and also of specific places as being in conflict, we have laboured over the definition of this part of our work – referring to ‘areas in times of conflict’ rather than ‘areas of conflict’.

The power of puppets

In Syria, art has played a vital role in sharing a message of civil society under assault, both with Syrian and international audiences. Dissent in Syria has long meant imprisonment or worse. For Syrian art collective Masasit Mati, puppets – a tool of satire worldwide – provide a level of anonymity and therefore safety to the team taking part.

The lasting legacy, the huge viewing numbers and the fact that the work has been showcased internationally, including at the V&A in London and the short film festival in Winterthur in Switzerland, show that the arts have an ability to transcend a time-bound or even context-specific framework.

Masasit Mati also cites international engagement as an aim, with its work providing a tool to present a different perspective on the people and ideas behind the Syrian uprising. As they put it: “Art has the unique gift of being able to provoke and make people react, to question and challenge without being forced to give answers and solutions.”

Work in the West

It could be argued that in the UK artistic engagement with the discussions around Brexit has been muted to say the least, although there are some notable exceptions, such as the anti-Brexit campaign involving Pippa Koszerek and other artists and Carol Duffy’s play at the National Theatre.

Across the Atlantic, on the other hand, there has already been some remarkable work created in reaction to the Trump victory. The day after his election, Anida Yoeu Ali took a deeply emotional and raw piece, The Red Chador: The Day After, to the streets.

If we are providing space to ask the difficult questions, we must also discuss how we best protect those doing the asking. While the offer of the space and freedom to create, and the opening of networks are hugely valuable, support mechanisms such as anonymity for participants and discussing comfort levels and needs within the group at the earliest possible stage are essential.

As artists and organisers, we need to think about why we shy away from some topics and whether we can engage with them through artistic means. How can we engage creatively with topics that would otherwise be off limits? How can we present aspects of countries in times of conflict other than those that dominate the media?

Festival and event producers must find new ways to bring this work to new audiences. Art can provide us with the tools to break out of our bubbles, bringing people of diverse opinions together and opening up the space to allow us to speak to one another. At a moment when the world seems more divided than ever, this is vital.

Daniel Gorman is Executive Director of Shubbak, Coordinator for Highlight Arts and author of The Art of Disobedience, published by IETM.
www.shubbak.co.uk
highlightarts.org

In times of conflict