No wonder there is so much talk about the death of opera when people are excluded from it all the time, says Bill Bankes-Jones. But are attitudes finally starting to change? 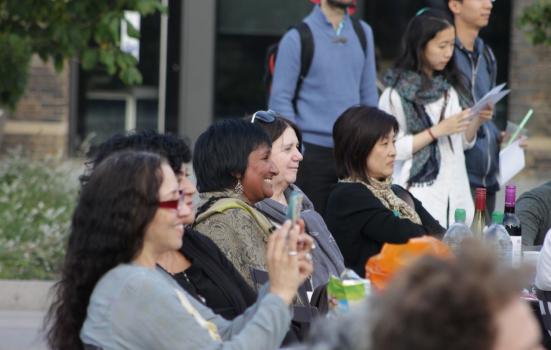 An audience for a Tête à Tête production

I started Tête à Tête in the late 1990s because there were a lot of things I wanted to do that I couldn’t achieve within bigger institutions.

I had a very strong sense, probably much influenced by the great director, mentor and friend Declan Donellan, that it was imperative for any company of performers you assemble to be ‘multicultural’ as we then called it. When you assemble a cast of performers, you create a microcosm of the world. You must reflect that world in all its glorious variety, and must reflect on stage the variety you would like to see in your audience, thus letting your audience see itself in you.

So, we did. In conjunction with our casting consultant Sarah Playfair and a succession of music directors, we’ve worked very hard to keep this going. We’ve not always been 100% successful, but we’ve tried pretty damned hard.

There was nothing cloak and dagger about this process, but it has always been entirely covert. It’s so much more important that an artist feels like a really great artist rather than the represention of a quota; we never had any scheme which placed anyone on a minority pedestal or separated them in any way. Minority artists were certainly never confined to minor roles. We just monitored this all carefully, quietly, privately and as methodically as we could.

There was nothing cloak and dagger about this process, but it has always been entirely covert.

I met the wonderful Kenneth Tharp, then Artistic Director of The Place, a couple of years ago. He described opera as “not very diverse,”  and I remember replying: “Actually I think it is. Maybe everyone cut out from grander places comes to me.”

The dividend of diverse casting (and indeed diverse commissioning) has been huge. The cumulative effect is that after a decade or more of presenting a very diverse face to the world, a diverse world has come to us.

Within a year, we were performing at The Place, with a Nigerian Pidgin opera, a Caribbean opera and our own co-production with Streetwise Opera and people with experience of homelessness – itself a glorious kaleidoscope of mysterious ethnicities, genders, sexualities, religions, and goodness knows what else.

The audiences for each of these shows were fantastically, phenomenally different, welcoming huge proportions of Nigerian and then Caribbean punters who  thoroughly enjoyed shows that told their own stories, in their own idioms.

We’ve done a lot of number crunching recently and the emerging figures support what I’m saying. 22% of the 50 composers in our last festival were from black, Asian or minority ethnic backgrounds; among festival producers, we’ve had 53% male, 45% female and 2% transgender. There’s still some way to go there, but it’s better than most. For the last festival, I commissioned a 19-year-old female composer for the third time.

We’ve now shifted to focus on the overall issue of privilege and making sure that our work can be both enjoyed and created by the broadest range of people possible. If we really nail that, then we’ve also nailed all the other barriers, of race, gender, sexuality, religion, disability and so forth.

A huge step forward has been Cubitt Sessions, our partnership with King’s Cross. Last year we performed new opera on an outdoor stage in the street. It was thrilling to witness an audience made up of passers by, as well as fans thoroughly enjoying our kind of work without barriers of any kind.

We’d also like to address more thoroughly the issue of disability amongst our artists, staff and output. There’s definitely more work to be done there.

On a simple human level, I feel very strongly that it’s wrong to exclude anyone from any opportunity, including the consumption, creation and servicing of opera, especially when the (multicultural, multigender, pansexual, cross-ability) taxpayer is part-financing it. And yet people are still being excluded all the time. You only have to visit any major UK opera company to see this. Is it any wonder there is so much talk of aging audiences and the death of opera?

But I think we’re at a turning point now. Arts organisations have failed to meet their obligations in a big way – ACE was imposing racial quotas to be ignored right back in the 1980s – and it’s right that this is being clamped down on once and for all.

Gone are the days when one could covertly engineer the kind of company I’ve set out above. Conversations about diversity are out in the open, and rightly so. There is a huge amount of talking to do. We need to talk and talk and talk.

We have to talk through everyone’s differences because in order to become genuinely welcoming, we have to understand each other properly. We’re entering a necessary period of forensic discrimination. I regret that we didn’t all try harder in a gentler way long ago, and thus avoid the need for this, but it’s really imperative now.

Reflecting the world
Food for the soul