Are we losing the art of conversation? Tom Pow explains how a project in Scotland is using the arts to stimulate communication. 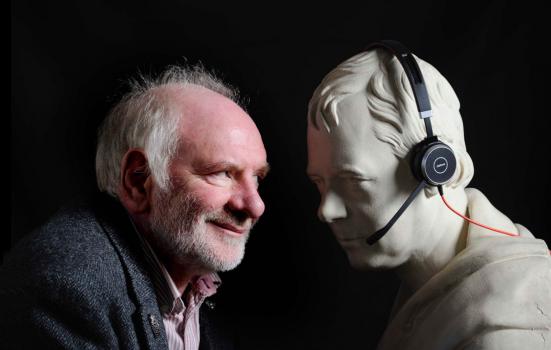 In certain universities in the US, medical students are asked to contemplate a painting for 15 minutes and then hold a conversation about it. The value of the exercise is reflecting on emotions and relationships, coming out of their comfort zones and respecting openness.

Might it be possible, I wonder, to divide the visual arts into those best suited for contemplation and those for conversation? Or perhaps all artforms invite both responses from us, even if we’re on our own. After all, to open a book is to begin a conversation.

It was the written word that seeded the idea for A Year of Conversation 2019. Argentinian poet Jorge Fondebrider commented at a launch of his poetry in Edinburgh on how hard it is to have a conversation with us because we are 'missing half the conversation'.

He was referring to the paucity of translated literature available, what has been called 'the three per cent problem' (the estimated average percentage of books sold in the US that are works in translation). The idea of ‘translation as conversation’ lodged with me and I began to talk to arts practitioners about the role of conversation in their artforms and the importance they attached to it.

The arts have special qualities for the nurturing of conversation, concerned as they are with communication, expression, empathy and curiosity. And these qualities are becoming increasingly rare in daily life – private and political.

Over the years, I have worked with a wide range of artists – printmakers, collage artists, ceramicists, sound artists and jazz musicians. At times, the conversation we've had - aside from talking about the work itself - has been extensive, at other times necessary but cursory. But each time I experienced the enrichment that comes with listening and learning.

Improvisatory jazz may be the most obvious example of an artform that involves listening in conversation, but there is a listening in any successful collaborative conversation. Such projects, in my experience, confound arithmetic by demonstrating how 1+1=3.

We have a range of partners (and in the digital age, also an international reach) and I have had stimulating conversations with them all about conversation, and what their specific focus will be.

The importance of rituals

The Russian film-maker Andrei Tarkovsky commented: “Our times are characterised by the loss of rituals, but it is important to have rituals in order to find our way back to ourselves on a regular basis.”

In the world Tarkovsky depicts, how might artists and creative people (all of us) devise rituals for conversation for two to 5,000 people? The ritual should be as straightforward as a recipe, and as nourishing.

Tom Pow is Creative Director of A Year of Conversation 2019.
www.ayearofconversation.com

A Day of Conversation takes place across Scotland on Saturday 11 May in partnership with Voluntary Arts Scotland as part of the Get Creative Festival.