In the wake of budget cuts, local arts groups in Birmingham have come together to help shape a new democratic approach to culture in the city, says Tom Jones. 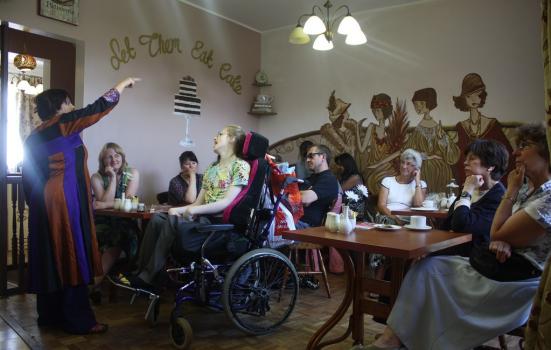 A Turkish storytelling project that worked with artists from Edgbaston Arts Forum
Photo:

In 2010, Birmingham City Council had become aware that its hitherto extensive and successful community arts service was no longer sustainable. In going out to tender with community-based groups, council officers took a first vital step towards democratising arts provision in the city.

Accordingly, ten small arts groups of a variety of types were commissioned to manage local arts forums. With a forum in ten districts, Birmingham has created a local arts structure embedded across locations with widely varying socio-economic profiles. Significantly, the forums were led by artists who were resident in their respective districts.

Because of this physical and management structure, the forums were able to generate local arts activities in a notably different way. Systematically employing co-design methodologies, artists functioned as facilitators, with the ‘why’ and ‘how’ of creative activities determined by what citizens perceived as appropriate for them.

The full impact of this approach soon became evident. Questions arose about the relative importance of process and product, and the consequent issue of how quality could be assessed and by whom. Tensions emerged about the role of the forums. As the commissioner, the local authority saw them instrumentally, as a vehicle for delivering the city’s cultural offer in wards and neighbourhoods that it had designated as priority locations. Major arts organisations, on the other hand, tended to cast them as localised agents for their outreach and audience development programmes.

Ironically in all this, the forums were weakest where they were strongest. Physically localised, spread across the city, and operationally pre-occupied, they were disconnected and thus vulnerable to divide and rule tactics. The earlier promise that forums would develop a radically citizen-based approach to the arts was beginning to be undermined by the institutional interests of the cultural establishment.

The turning point came with two developments. From 2014–16, and alongside councils from Bristol, Bradford and Burnley, Birmingham participated in Connecting Communities through Culture. The forums were tasked with co-designing arts activities to encourage socio-cultural interaction between otherwise disengaged communities. However, in generating arts activities with citizens simultaneously in widely differing neighbourhoods and communities of interest across the whole of the city, the ten forum leaders became fully aware of the exciting potential of the forum structure.

They formed an independent company that could speak with one voice for all forums, raise funds in its own right and champion citizen-led arts. The organisation was named Number 11 Arts after a Birmingham bus route which links outlying micro-communities and, as a circular route, does not radiate from the centre.

At more or less the same time, arts organisations in Birmingham – large and small theatres, production companies, galleries and concert halls – followed a similar path to the forums and came together to form an umbrella organisation, Culture Central. Number 11 Arts and Culture Central are currently engaged whole-heartedly in exploring how we can co-operate on equal terms in future. Thus, we now have a strong platform for radically re-thinking the identity, place and functions of the arts in the City of Birmingham.

While continuing to hold the council commission to manage the local arts forums in Birmingham, Number 11 Arts now receives funds from other sources. Co-design methodology is a key factor in our approach. Through this process we employ a wide range of artforms to enable citizens to articulate and share not only how they see themselves, other citizens and the world around them, but also how their perceptions and those of others might change in future.

In this way, we are actively reshaping where the arts lie in the wider socio-cultural profile of a major European city. Through practice, the case is being made that the arts form common land and an integral feature of the daily lives of all citizens, alongside a field owned by professional providers and privileged consumers.

The capacity of the arts to mesh with other aspects of daily life and wider social issues is evidenced by a recent commission from a consortium of West Midlands universities. They conducted an open-ended creative consultation about reshaping urban services such as transport, policing and housing.

Artist-facilitators co-designed activities with contrasting resident groups, enabling them to articulate how they saw themselves in relation to the provision of urban services. The groups chose to engage in yarn-bombing their neighbourhood, composing rap lyrics about the buses and creating a community quilt highlighting what they valued in their environment. Citizen perspectives on urban service providers revealed through these activities were notably different from the ways in which providers see citizens.

Socially loaded hierarchical values are deeply embedded in our ideas about culture. Consider, for example, the different values associated with ballet and zumba classes. Through its structure, ways of working and its place in the Birmingham cultural spectrum, Number 11 Arts is in a position to set up change-making and placemaking dialogues across such divides. Employing co-design methodology enables citizens to benefit from artists’ creative skills and cultural insights, while simultaneously developing their creative capacities without surrendering their own sense of socio-cultural identity.

We are engaged in a Birmingham-based practice that is helping to shape two processes that are contributing to a more democratic approach to culture. We are fostering a power balance between two forms of authority: rigour that comes from professional capability in the arts, and relevance that comes from citizens’ lived experience. We are also engaged in realising the idea of creative placemaking by demonstrating that any venue housing an institution dedicated to the arts is no more a centre of culture than any other city location where citizens live, work or gather together.

This article is published under a Creative Commons CC BY-NC-ND 4.0 license. It first appeared on the Voluntary Arts website and has been slightly edited to fit ArtsProfessional’s context and house style.