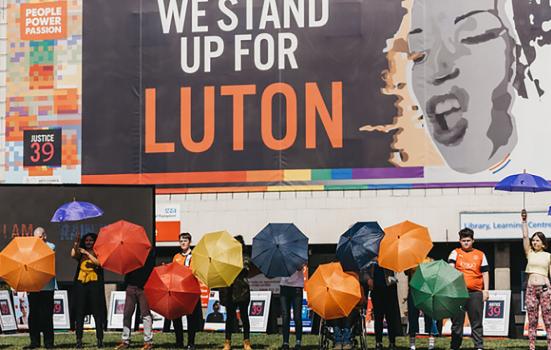 ‘Place’ is the word of the moment. When we look at the work The Audience Agency is doing, there are few projects that ‘place’ is not integral to. But ‘placemaking’ or ‘place shaping’ is so much more. It is about the needs of communities, localities, neighbourhoods, city regions and combined authorities that are coming into starker focus as we look towards recovery and rebuilding post-pandemic.

Whether the perspective is grassroots up (community driven or people-centred) or policy down (led by a local authority, agency or consortium), ‘placemaking’ or ‘place shaping’ is a collaborative endeavour. Arguably, both approaches are necessary to generate thriving places for people to live, work and visit. Involving creative people and organisations in this process can be a game-changer. Success requires collective vision and a willingness to work cross-sector and consider multiple perspectives. How we define these things and the way we achieve them are crucial.

Creativity is more than culture alone

Published in August 2020, our ‘Creative places’ guidance report – commissioned by the Local Government Association and developed with local authorities and agencies – stressed the ‘creative economy’ of a place is innately aggregate. The creative industries are a broad church in which non-profit and for-profit are interwoven. Unlocking the real creative potential of a place is as much about supporting makers and ‘createch’ in the wider creative economy as it is about cultural institutions and artists.

To make the biggest impact on our communities, socially and economically, we must unite creatives in other local industries. Cultural organisations can lead on galvanising the creative life of a place, bringing creative industry players together with local government. As NESTA’s John Davies puts it: “Supporting the creative sector is about councils having policies that produce an environment in which the local creative ecosystem can flourish, rather than trying to manage the ecosystem directly.”

We developed a ‘local levers for change’ model to highlight the breadth of people who can – and should – be involved in developing a place shaping strategy with real and lasting impact. 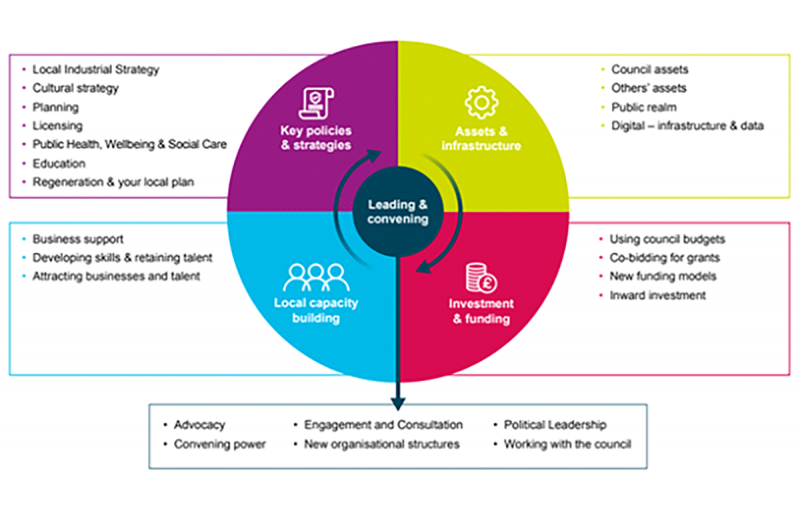 So what role can cultural organisations play? Many have a convening role, sitting at the centre of a matrix of local relationships. It often takes a well-informed cultural consortium to attract place-based funds. For example, we work with a lot of consortia using Audience Finder data to understand the size and potential of the marketplace or the local community’s distinctive needs. This often lays the groundwork for more ambitious, place-based plans.

Working with partners beyond the immediate local culture club will become increasingly important. Taking a leadership role in creative place-making means working beyond the narrow confines of the (funded) cultural sector. We can be major players in a wider creative ecosystem, bringing unique creative skills and assets to support other agencies. We have seen in particular the value of inclusive ‘creative catalyst’ projects to pull people together. Such projects allow local authorities or other agencies to discover how they can best support the economy and social life of an area through creativity.

Camden Alive is one such project that sees itself as a catalyst for change. It supported Camden Council in enabling creativity to flourish in its neighbourhoods and communities. Its inspiring programme was a springboard for shifting perceptions about creative place shaping, while demonstrating its power to deliver positive social and economic outcomes for residents. With funding, Camden Alive engaged 32 artists, residents of 10 social housing estates and six community groups to develop new ideas and artworks, which were then showcased through events and online via Camden People’s Museum. It was the relationships that developed, rather than the overarching strategy, that gave this approach structure and meaning.

Members of Camden Council remarked: “… it goes back to relationships between culture and organising culture. Whoever the organiser is, whether it's a local authority, an independent organisation, a big national organisation, it's about the relationships that they have with the residents and communities around them. And if they're non-existent, then it doesn't matter how diverse, how connected your programme might be, it won't connect with the audiences that you want.

“Individuals are the cultural asset – not buildings – the people who live in these places. They're full of culture, so there's something important about a mind shift, about continually establishing and re-establishing these links between cultural organisations and individuals.”

The project gave the council insight into the needs of a vast range of residents and cultural partners, generating an innovative arts team able to test new working practices such as co-curation and resident-led activity. Cross sector partnerships have emerged, as has the potential for cross-fertilisation between residents and organisations. And, crucially, inter-departmental collaboration has been cemented within the council itself.

Its origins may have been ‘top down’ but Camden Alive is now fully embedded in the community, bringing residents and artists together to share stories, creativity, culture, skills and opportunities.

RevoLuton Arts has developed more organically - grass-roots up - into a leader for creativity in Luton.

The Audience Agency has worked with RevoLuton to support evaluation, understand impact and develop learning. Together we have designed a new governance and business model enabling them to evolve from being a Creative People and Places (CPP) project into an independent organisation and creative leader, integral to the life of Luton.

RevoLuton built links across its whole community – with young people, local retailers, creative practitioners and many more. Initially this developed individual projects, but it went on to create more sustained ways to support them. After a number of years of working in this way, RevoLuton has become an important part of the borough’s infrastructure, running programmes like Luton ‘Creative leaders’ programme, which says:

“We reach out into all corners of the town, finding out what creativity means to the people who live here and collaborating with them to design creative events and projects that speak to their hearts. We uncover talent, collaborate with local creatives and develop ‘RevoLutonary’ ideas.”

Cultural organisations have a vital leadership role to play in the future of better, more liveable places. While targeted funding and an enlightened local authority strategy are important drivers, those places where organisations are already joining up across sectors and showing the way forward are much more likely to attract funds and local government commitment. Cultural organisations should take the initiative to unite with local colleagues across the wider creative ecosystem.

Penny Mills is Director of Consultancy, Anne Torreggiani is CEO, and Patrick Towell is Innovation Director of The Audience Agency

Get more information on the ways The Audience Agency can support creative collaboration and placemaking initiatives.

Little moments of joy
Reshaping our places and communities post-Covid
Can you do more together than alone?
2020 festivals: there’s no going back
Attracting audiences other artforms cannot reach
The value of insight on tour
Everyday Audience Finder
Lost in translation